Backstage with Neil Warnock as he swaps football for showbusiness 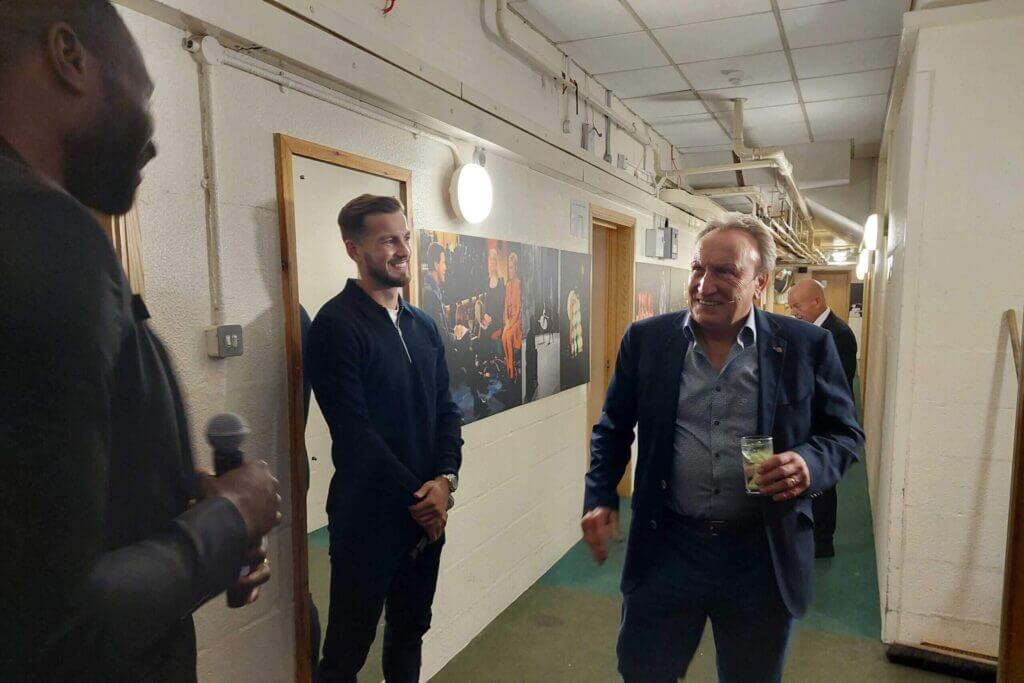 He’s managed teams playing at Wembley and the Millennium Stadium. He’s gone toe to toe with Sir Alex Ferguson, Pep Guardiola and Jurgen Klopp. He has stared down hostile opposition fans many times.

Usually, nothing fazes Neil Warnock, an outspoken figure who once quipped that Bristol City fans — a club where he had several run-ins — should mark his death by chanting “Warnock’s a wanker” rather than a minute’s silence.

Tonight, though, he looks nervous. Tonight is a step into the unknown. Tonight is the opening night of a theatre tour that will take the 73-year-old around the country.

“I’m out of my comfort zone,” Warnock tells The Athletic a few hours before he is due to take to the stage in front of an audience of about 1,450 at St David’s Hall in the Welsh capital.

“There I’ll be, coming out on stage, and everyone looking up at me. I honestly don’t know what to expect.” 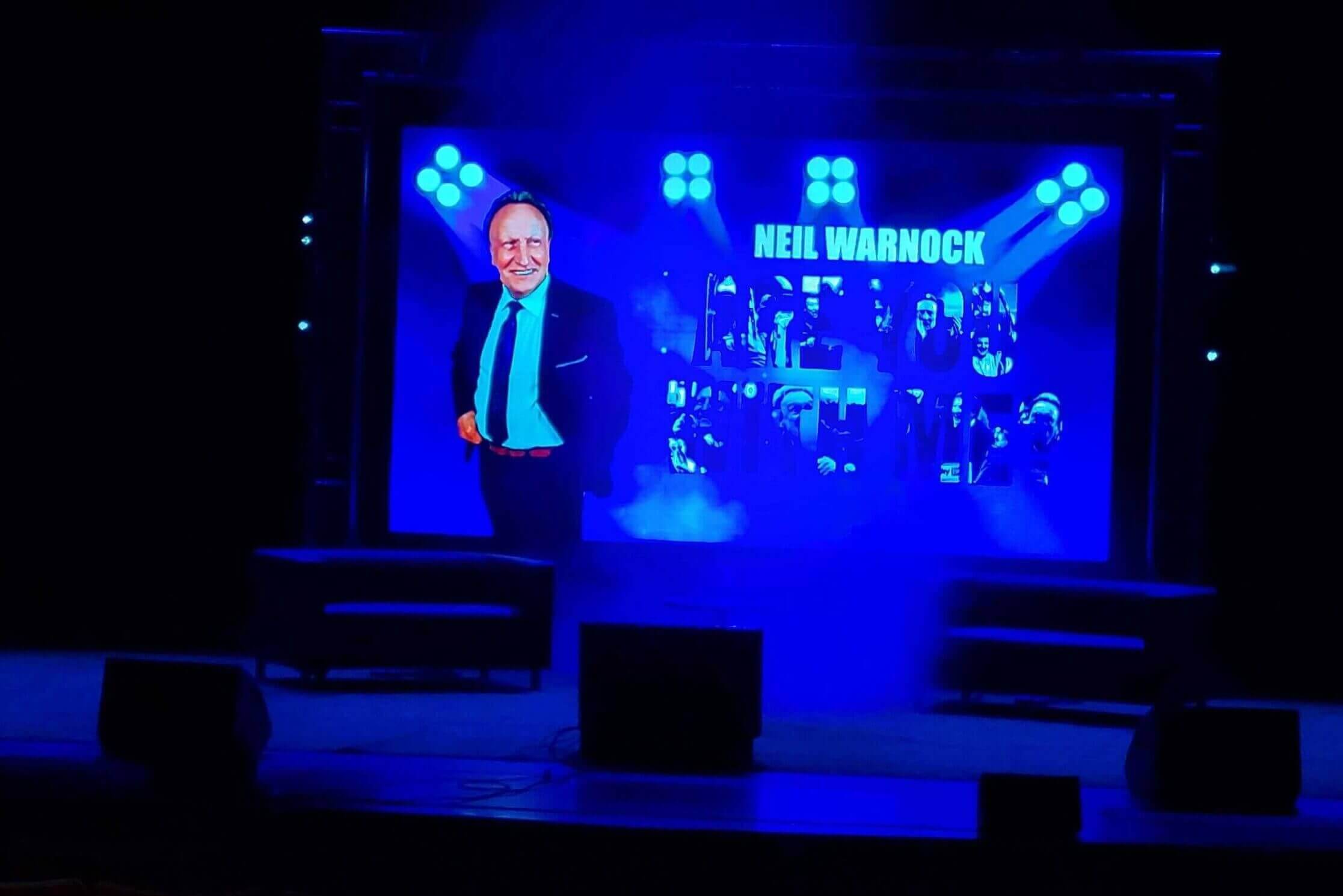 The stage, ready for the arrival of Warnock (Photo: Richard Sutcliffe)

One of football’s most outspoken figures is quiet for a moment. But only a moment.

“I imagine it’ll be like going to an FA hearing.

“Though this time, I hope people are prepared to listen to me. I was always allowed to speak when up before the FA but it never did any good. You knew before going in you were going to get done.”

Warnock’s days of almost having his own parking space at Lancaster Gate, Soho Square or Wembley during a career spanning more than four decades and 1,603 competitive fixtures are in the rear-view mirror.

Confirmation of his retirement from management came in the wake of leaving Middlesbrough last November. Since then, there has been media work to keep him busy, including regular spots on Talksport’s breakfast show with Alan Brazil and Ally McCoist, which he thoroughly enjoys.

There has also been plenty of family time, including 30-mile bike rides with wife Sharon near their Cornwall home and an unlikely foray into social media via a Twitter account that has built a following of more than 200,000 in just four months. More of that later.

For now, a tour that will visit many of his managerial career stop-offs — including Sheffield, Cardiff, Huddersfield, Middlesbrough, Plymouth and Scarborough — is occupying his mind.

“I’ve always wanted to talk about stories that previously I’ve not been able to,” says Warnock, whose eight promotions as a manager are a record for English football. “About Arsene Wenger, Sir Alex Ferguson and Brian Clough when I was at Notts County. It will be nice to share them. A chance to put a few things to bed as well. 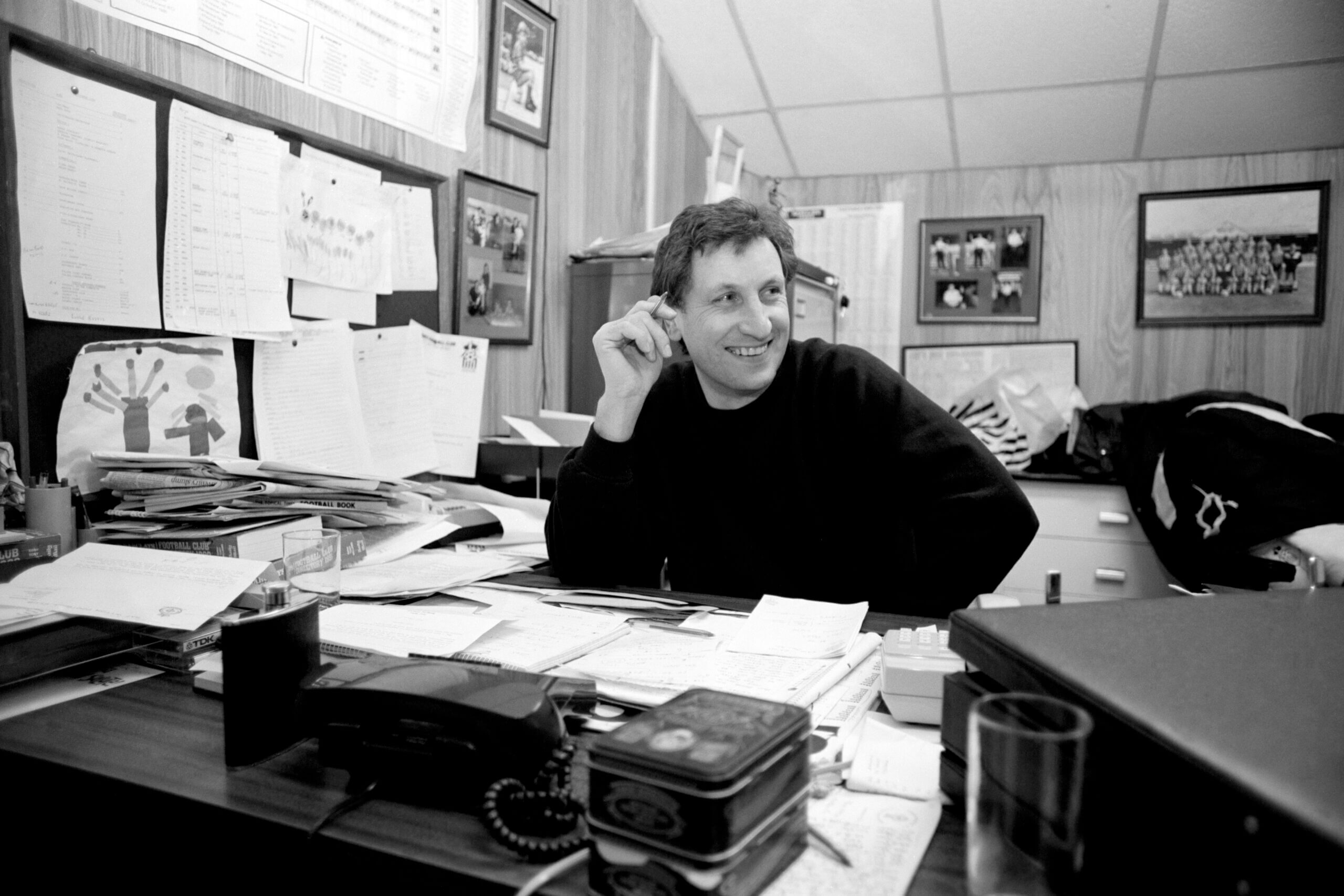 Warnock while manager of Notts County, with whom he won promotion twice (Photo: Claire Mackintosh/PA Images via Getty Images)

“It also means people can now ask the quiz question, ‘What have Neil Warnock and The Beatles got in common?’. We’ve both sold out City Hall in Sheffield! That was the place to be when I was a teenager and in my early twenties. I went to all the dances on a Saturday night.

“The timing is right, too. COVID was tough for everyone. I know how hard I worked at Middlesbrough to keep everyone happy behind the scenes. And keep the fans informed.

“Now it’s over, people want to have fun. They want to go to the theatre. And I want to give them a proper night out.”

Even those fans at Bristol City and a few other clubs who still love to hate one of football’s great pantomime villains?

“Of course,” he chuckles. “Even those who I’ve said in the past should boo me when I’m gone. Though I would like to put right that comment. I don’t want everyone, up and down the country, chanting that I’m a wanker. Just Ashton Gate.”

Cardiff, Monday afternoon. Warnock is taking a stroll around a city whose football club he managed for a little over three years.

His stint in south Wales was an eventful one, taking City from the depths of the Championship to the Premier League during his first full season in charge but then being unable to keep them up a year later. In the days before VAR, Cardiff could point to several debatable refereeing decisions to argue their relegation was harsh. 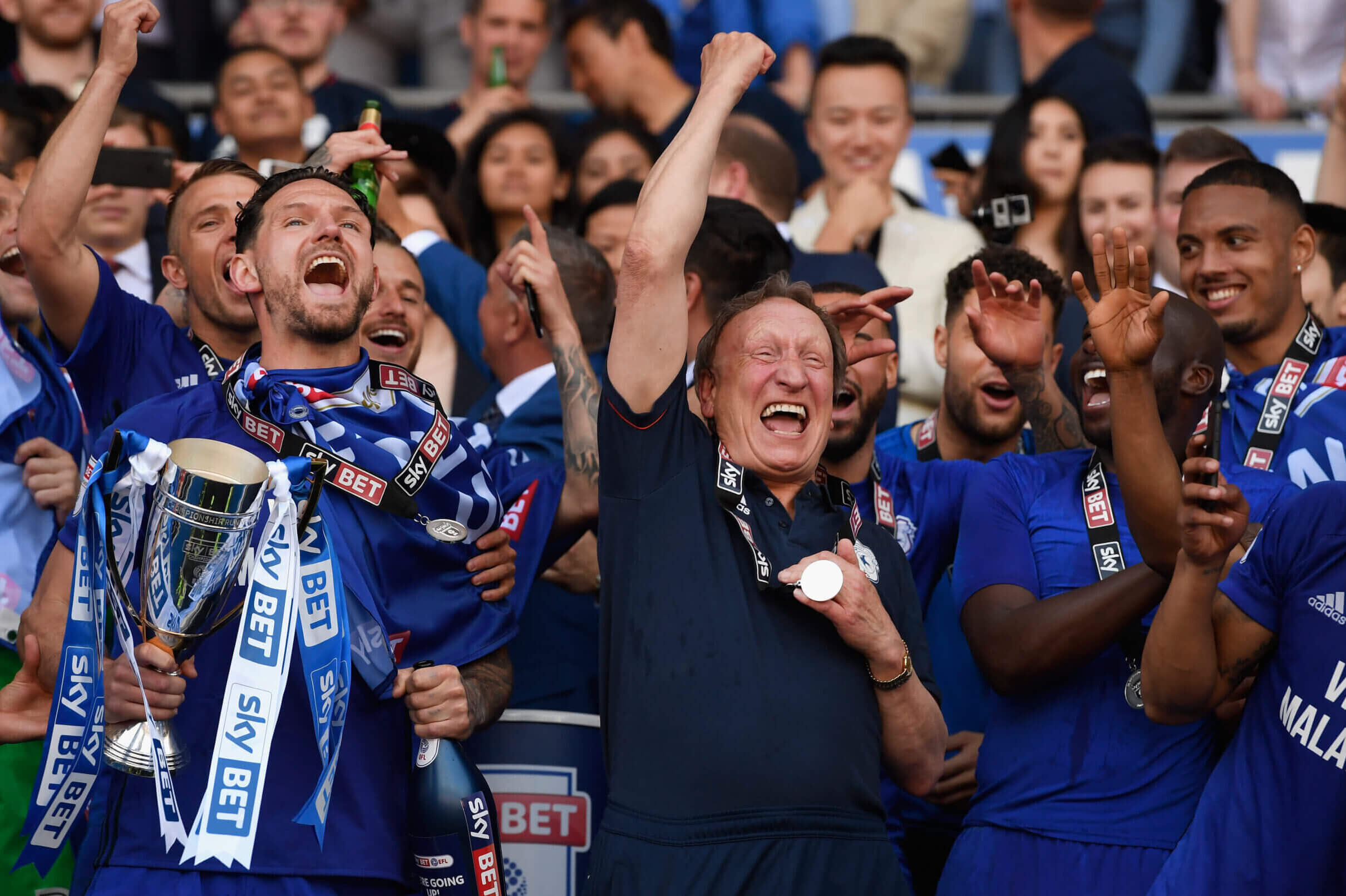 Warnock remains a popular figure in these parts, a point underlined by how many times he and Sharon are stopped for selfies. It was a similar story elsewhere during a recent whistlestop tour of the country, loosely arranged to publicise his upcoming theatre dates.

These strolls down memory lane have left him in a reflective mood, as has the loss of a trusted friend and colleague.

“My old assistant Mick Jones passing away recently brought home how precious life is and how you have to enjoy every day,” says Warnock. “We had some incredible times together. He was the sensible one.

“I’ve managed to get to most of my old clubs. Not Middlesbrough yet, obviously. I thought I’d built a really good team so I was disappointed for it to end as it did. But the reception elsewhere these past few weeks has been great.

“To be on the pitch at Huddersfield, Sheffield United and Scarborough, and see how much the fans remember the promotions, was a great feeling. You don’t get a chance to look back when in management, there’s just too much to do. That’s why it has been great. I’ve been lucky to manage the clubs that I have.” 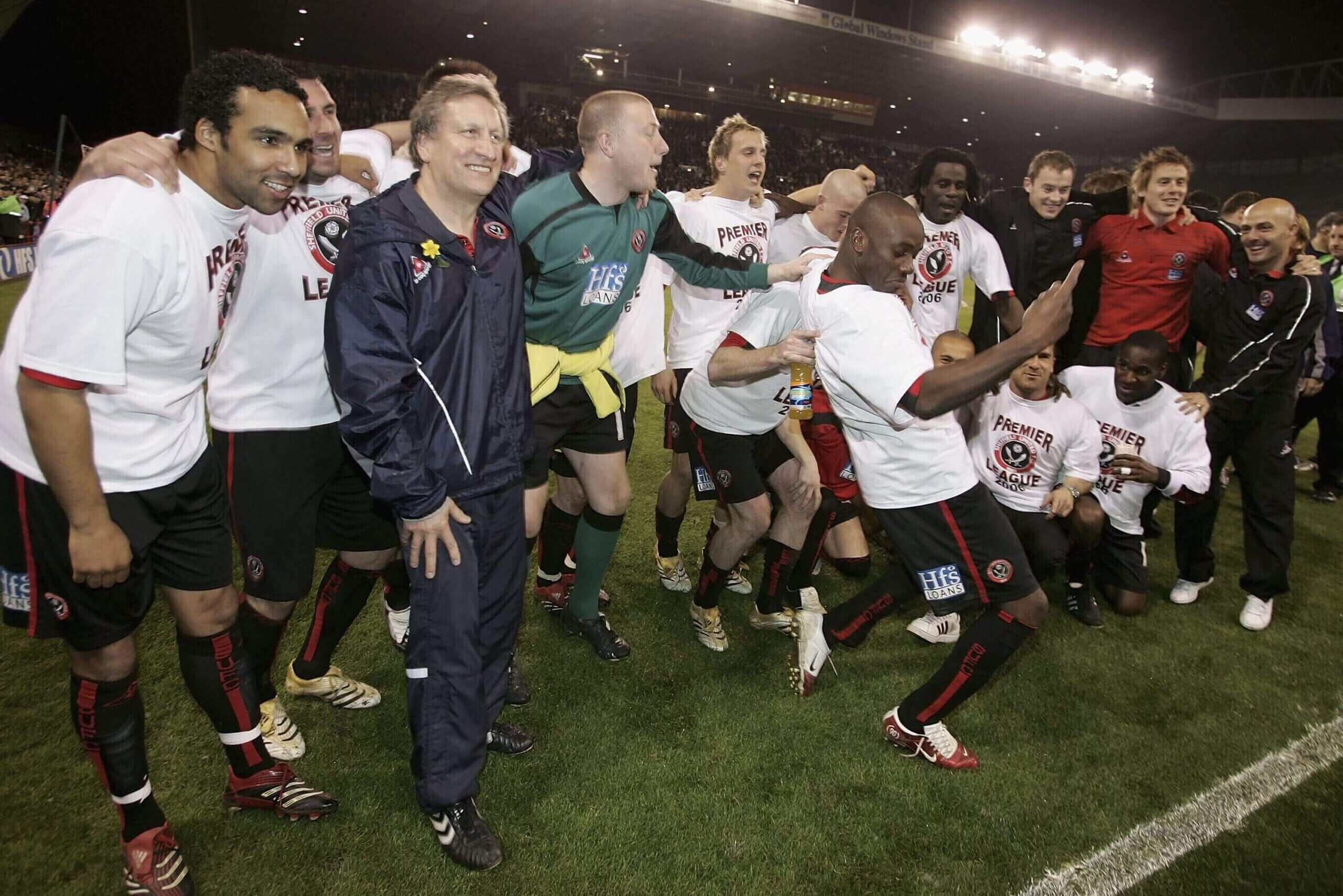 Revisiting the past during his journey around the country has also brought into sharp focus a retirement that, by his own admission, was a long time coming after four previous declarations to pack it in proved premature.

“My original thought years and years ago was to call it a day after Sheffield United,” he says. “But the circumstances of me leaving (in 2007 after relegation and the controversial Carlos Tevez affair) didn’t sit right. I couldn’t finish like that.

“I’m pleased I did carry on. Without doing so, I’d never have gone to live in London. I really loved my time at Crystal Palace and QPR.”

Asked what he misses most from those years in management, Warnock replies: “The training ground and the banter with the players, in particular. The dressing room can be a great place.

“I was lucky enough to be invited into the Scarborough dressing room after their 2-2 draw with Bradford Park Avenue last month. The lads had come back from 2-0 down with two late goals to earn a point and I said, ‘You lot will do for me — just what I’d expect from one of my teams, never giving up’.”

Listening to Warnock’s enthusiasm about being back among things does beg the question of whether we might see yet another comeback to rival Frank Sinatra.

“The thing is you can never say never,” he replies with a smile. “And I do always get itchy feet about January.”

Watch this space, clearly. For now, Warnock has more than enough to occupy his time, including one of the more surprising moves for someone who, as a manager, saw little benefit to his players being on social media.

Videos on all manner of subjects have quickly gone viral since joining Twitter in May, including a re-enactment of the time he stared down the lens of a Sky Sports camera before a Premier League game at Cardiff in a style so confrontational that Liam Gallagher would have surely approved.

“I did a cycling one up in Scotland that Sharon filmed during the heatwave about not getting dehydrated and it had something like 1.5 million clicks or whatever you call it,” he says, sounding both proud and a tad non-plussed.

“Then there was the one where I am doing keepy-uppies. A bit of a laugh after the Richarlison thing (when the Brazilian was showboating for Spurs recently against Nottingham Forest). All people seemed to talk about was the size of the shorts I had on.”

Keep on entertaining the fans @richarlison97 and taking the retribution 🤣 #football pic.twitter.com/H3u8IQwPR6

Not that this surprise move into Twitter hasn’t been without its pitfalls, such as the video where Warnock can be seen steering his boat near Looe Beach, Cornwall, alongside the caption, “Have they announced the new Bond yet?”

“I got into trouble for that,” he says with a grimace. “I didn’t have a life jacket on. Nor did I have a pull cord. One or two people quite rightly called me stupid over Twitter and I agree with them.

“To be honest, I never thought about it. But I will next time we go out. The thing with that video is it happened spontaneously. There was no planning. The boat had been in for repairs and we were just trying it out for a bit of fun.”

Have they announced the new Bond yet? 😎 #FridayFeeling #heatwave #retirement pic.twitter.com/80rKE2t2Ad

Fear of getting into trouble is not what concerns Warnock as he and Sharon arrive at Cardiff’s St David’s Hall shortly before 6pm last Tuesday. Instead, his mind is on stepping into the world of show business.

The couple know the venue from watching veteran songwriter Paul Carrack perform there during Warnock’s stint as Cardiff manager. But this is different, a point brought home when popping into the still-empty auditorium before heading to meet and greet those fans who have bought VIP tickets.

They lap up the stories from a career like few others, including the dozen years as a player that saw Warnock, by his own admission, “make a success out of failure” by chalking up eight clubs, mainly on free moves.

Sol Bamba and Joe Ralls, both members of Warnock’s 2018 promotion-winning Cardiff side, have been lined up as special guests for the second half of the show. The pair appear backstage during the interval, Bamba admitting he found it fascinating to hear his old boss explaining how to get the best out of players.

“Look at how differently he handled me and you,” Bamba says as he turns to Ralls, Cardiff’s current captain. “He’d tear into me every day, knowing I’d be determined to show him. But I can’t remember him telling you off even once.

“Great man-management, when you look back.”

Ralls nods in agreement, though he will later reveal (to much amusement from the audience), how “the gaffer never spoke a word to me for a month after getting sent off at Spurs, not even a ‘hello’.” 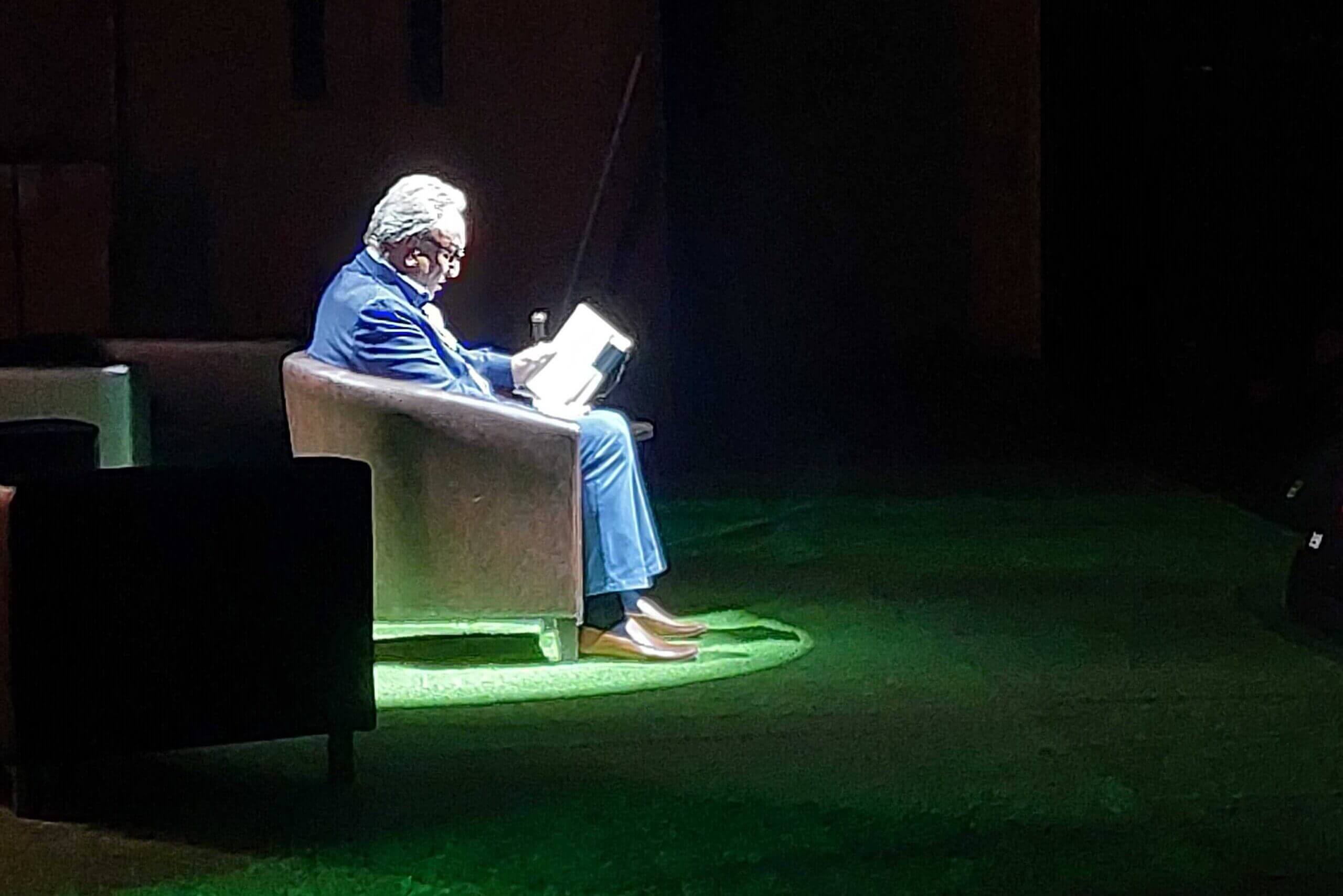 Warnock continues to entertain to the last, even reading a poem he had written about all the 16 clubs he managed. A standing ovation follows, plus a massive cheer as he performs the “Ayatollah” celebration that is unique to Cardiff supporters. And then it’s over.

“What a great night,” he says after the theatre has emptied. “I got a bit emotional there, at the end. The reception was incredible. As I said to you beforehand, I honestly had no idea what to expect.

“But they were brilliant. I’m really looking forward to the rest of the tour now. There might be other dates in the future, too. I want to go to places where they used to boo me when I came out of the tunnel. Bristol and Ipswich, first up. Can you imagine?”

Click here for tickets to ‘Neil Warnock – Are You With Me?’