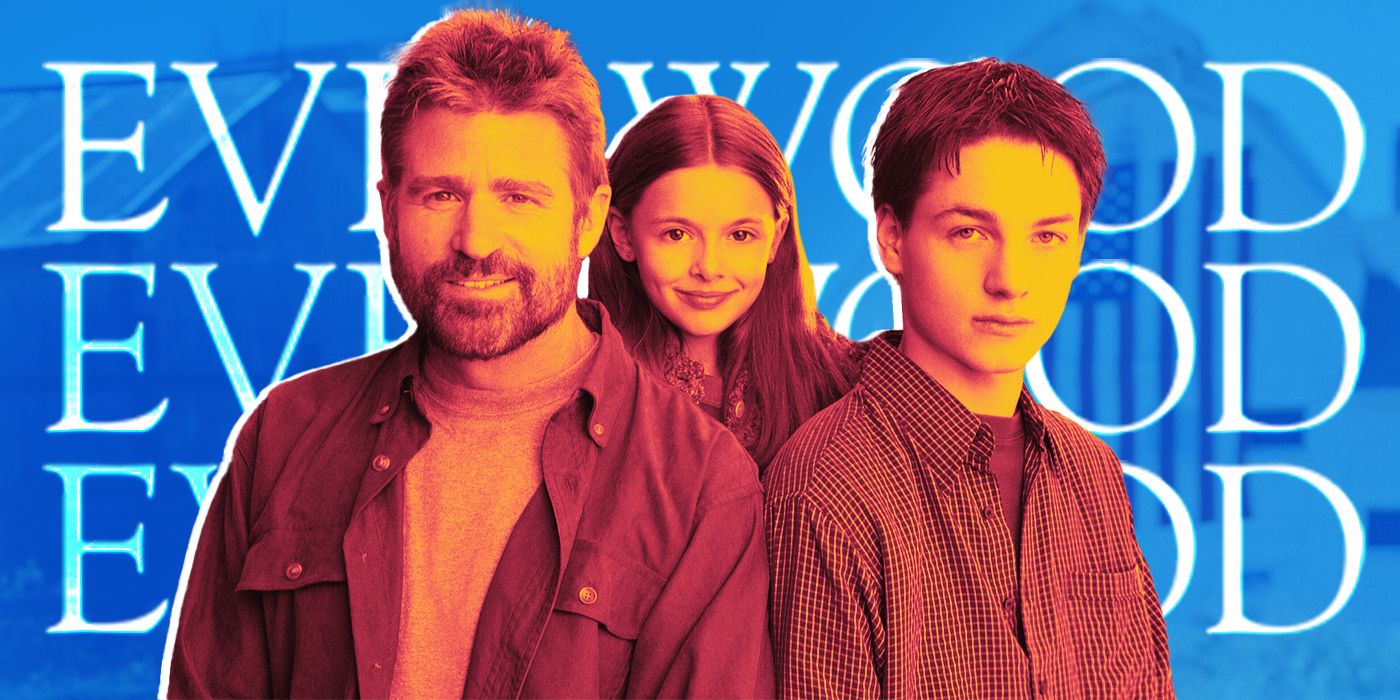 Today, Greg Berlanti is, without a doubt, one of Tinseltown’s most bankable names. Listed by Time as one of 2020's most influential people, he has captivated viewers as the man behind The CW’s Arrow (2012 – 2020) and The Flash (2014 – present), You (2018 – present) on Netflix, and the award-winning feature film Love, Simon (2018). As the 2022 recipient of the Norman Lear Achievement Award, it looks as though Berlanti has no intentions of slowing down just yet. But back in the early 2000s, long before the writer-director-producer extraordinaire was on the radar of audiences everywhere, he took us on an unforgettable trip to Everwood (2002 – 2006).

The show told the story of Dr. Andy Brown (Treat Williams) a world-famous neurosurgeon who, after the unexpected death of his wife Julia (Brenda Strong), decides to tear his family away from their lives in The Big Apple to start afresh in the small mountain town of Everwood, Colorado. And while the entire medical world is left perplexed by his abrupt decision, Andy has his reasons. With Julia now gone, he is determined to be a better father to his two kids, particularly his teenage son Ephram (Gregory Smith) with whom he has barely any relationship at all. Over four seasons, we watch as Andy and Ephram struggle to meet halfway, continuously facing tragedy and heartbreak at every turn but both being able to find comfort in the arms of the townsfolk they gradually learn to call family. With September 16 marking 20 years since Everwood first aired on The WB, now seems the perfect opportunity to remind TV addicts why this often-forgotten series should be remembered as one of the best family sagas of all time.

RELATED: Emily VanCamp Details Her MCU Journey from Thinking They “Put Sharon to Bed” to Hearing About ‘Falcon and Winter Soldier'

It wouldn’t be completely out of line to say that the series often leaned into more melodramatic territory. Take Season 1, for example. When Andy isn’t encountering visions of his dead wife, he’s struggling to rescue the town’s golden boy Colin (Mike Erwin) from a coma. Then there are the more bizarre story threads, like the mechanic (J.K. Simmons) who can predict the future or the recluse (John Savage) who lives in the woods with his bear, both of which bring to mind the quirky but brilliant Northern Exposure (1990 – 1995). Although, this isn’t to say that the writing on Everwood was subpar. On the contrary, the show was a perfect demonstration of fusing larger-than-life storytelling with mature sensitivity.

Let’s consider some of the other hit television properties of the early 2000s, like Josh Schwartz’ The O.C. (2003 – 2007) or Mark Schwahn’s One Tree Hill (2003 – 2012). In both shows, the exploration of the father-son dynamic was arguably very black and white. In the former, Sandy Cohen (Peter Gallagher) was the absolute perfect role model to teenager Ryan (Ben McKenzie) whereas One Tree Hill‘s Dan Scott (Paul Johansson) was the worst type of father his sons (Chad Michael Murray and James Lafferty) could ever imagine. However, the relationship between Andy and Ephram is arguably far more complicated. Indeed, to begin with we sympathize with Ephram when Andy snatches him away from the only life he has ever known to a town they’ve no connection with. In one particularly moving sequence from the pilot, Ephram reveals he wished Andy had died instead of Julia, to which Andy agrees. But as time goes on, our ideas about who is right and who is wrong become considerably less clear. In a standout episode late in the first season, Ephram lashes out at his father, believing that Andy had cheated on Julia when she was alive. In a surprising turn of events, we learn that it was in fact Julia who had engaged in an affair with another man. And even as Ephram directs all of his rage toward him, Andy tries to justify Julia’s actions and reassure his son that she was still a great wife and mother despite this. It’s a heartbreaking scene, one that encourages us to consider that Andy might not be as terrible a father as we initially thought he was. That he is trying to preserve Ephram’s memory of Julia, when he very easily could have sullied her name, is a testament to his role as a father.

‘Everwood' Also Focuses on Moments of Solidarity Between Father and Son

In the opening episodes of Season 2, we learn that Colin died despite Andy’s best efforts to treat him. As a result, Andy is cast out by much of the town and falls into a depression of sorts. However, through all of this, Ephram stands by his father and tries to convince him that Colin’s death was not his fault. Similarly, when the townspeople discover that Andy’s new girlfriend Linda (marcia cross) is living with HIV, Ephram is concerned that his father’s life might be at risk and that he may lose the only parent that he has left. Putting his children’s needs before his own, Andy makes the decision to end his relationship with her. And so, through these instances we learn that Andy and Ephram’s path to understanding one another and forming a genuine bond is not completely linear. Essentially, the bad times lead to good times and vice versa.

Arguably, neither before nor since Everwood has a television series explored the parent-child dynamic with such authenticity, expertly reflecting the relationships we have with our own parents or children in real life. Indeed, one of the most beautiful aspects of the show is that we tend to switch positions depending on where we’re at in our own lives at the time of viewing. As someone in our teenage years or twenties still living in our parent’s homes, we might find ourselves empathizing with Ephram but as we grow to become mothers or fathers it might be that we very easily see things from Andy’s perspective. And this, it should be said, is a huge credit to the writing team. They created two characters, who despite finding themselves in exaggerated and sometimes absurd circumstances, are entirely likable and, even more importantly, relatable.

‘Everwood' Also Served as a Showcase for Emerging Stars

It was not only the writing on Everwood that stood out, as the series was a masterclass on dramatic acting. It was a breeding ground for emerging talent, counting Marvel heroes Chris Pratt and Emily VanCampand later Grey’s Anatomy star Sarah Drewamong its core cast. Beside them were more seasoned performers like Tom Almonds and Scott Wolfin addition to a variety of stars in guest roles such as James Earl Jones, Betty Whiteand Philip Baker Hall. Each of them was on top form throughout the show’s run, and Williams and Smith were no exception.

In one notable sequence from Season 3, while on a trip to New York, Ephram suggests that Andy and younger sister Delia (Vivien Cardone) leave Everwood with him once he moves to attend Julliard. Andy, however, is concealing the fact that he bribed Delia’s former babysitter Madison (Sarah Lancaster) to leave town when she became pregnant with Ephram’s child. And as Ephram asks his father to join him in New York, finally admitting that the decision to move to Everwood years prior was best, we see the pain eating Andy from the inside with barely any effort from Williams at all. Smith is similarly capable of expressing such heartache when he finally learns the truth from his father, begging him to stay quiet when Andy tries to explain his actions. Despite his young age, the actor succeeds in standing toe to toe with a veteran like Williams, the two bouncing off each other like any father and son would. Essentially, the pair’s acting abilities were able to ground the more sensational subject matter and sometimes over-the-top dialogue in a sense of realism, thus allowing audiences to engage more with the show. In less capable hands, the series may have been more likened to a soap opera than a drama series. Even by today’s standards, the performances on Everwood are something to be admired, and it's no wonder why many of its cast went on to bigger things.

As far as family dramas go, there are series that come up in discussions time and time again. The likes of Party of Five (1994 – 2000), Six Feet Under (2001 – 2005), and, more recently, This is Us (2016 – 2022), will continue to be talked about for years to come. However, there isn’t any reason why Everwood shouldn’t be involved in those conversations too. Yes, it could be heavy at times, and at other times downright strange, but the love and resentment between father and son have never been so vividly realized. And despite now being two decades old, the series hasn’t aged a day. Still exist the struggles of being a single parent and still exist the trials of being a teenager yearning for independence. The characters remain relatable, and the acting remains spectacular. That Berlanti hasn’t attempted to tackle another family saga since is somewhat of a shame, as is the fact that the show hasn’t found a new audience in the age of streaming. Regardless, for those of us old and lucky enough to remember Everwoodwe’ll always have 20 years worth of memories.