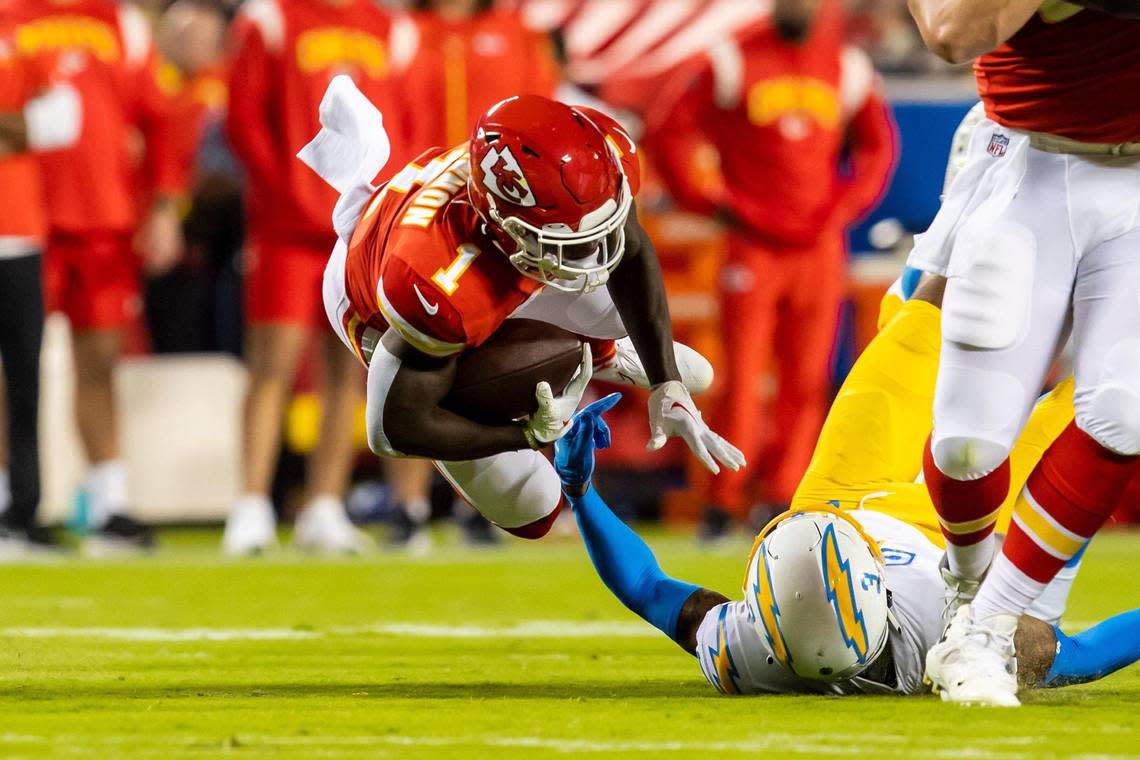 Here are our choices for the game’s MVP and a Chiefs report card.

KC STAR OF THE GAME

In his second NFL game and first start, rookie Jaylen Watson made the defensive play of a lifetime. With the Chargers driving and in prime position to take the lead, Watson picked off a Justin Herbert pass intended for tight end Gerald Everett.

But it was more than just a pickoff for the seventh-round pick this spring. Watson jumped in front of Everett and the ball at the goal line, eluded Herbert’s tackle attempt around the 20 and raced to the end zone to complete a 99-yard pick-six touchdown return. The distance matched the second-longest in franchise history (Gary Barbaro had the longest against Jim Zorn and the Seattle Seahawks on Dec. 11, 1977).

Next: The Chiefs travel to Indianapolis to take on the Colts in their home opener on Sept. 25. The game kicks off at noon Central Time and will be televised by CBS (Ch. 5 in Kansas City). The Colts, who opened the season with a tie at Houston, visit Jacksonville on Sunday.

The Mahomes touchdown pass to Jerick McKinnon will go on the highlight reel. After escaping danger, Mahomes ran out of real estate on the sideline before flicking a sidearm sling through the arms of two defenders. McKinnon caught the ball in front of the goal line. Asante Samuel nearly had a pick of Mahomes. The call was overturned. The drive ended with Mahomes’ 41-touchdown pass to Justin Watson, a beautiful read by Mahomes who stepped up in the pocket to make the throw with a flick of his wrist.

The Chiefs faced third-and-2 from their 28. Clyde Edwards-Helaire got 1. On third down, Isiah Pacheco got stoned. This offensive line is supposed to move people. It didn’t happen there. The defense pinned the late in the third quarter and the Chiefs took advantage of the field position, reaching the 3. McKinnon went for 2, but an incomplete pass and a shovel pass to Travis Kelce gained nothing. Instead of going for it on fourth-and-goal at the 1, the Chiefs kicked a field goal. The Chiefs have to improve in short-yardage situations. But, when the Chiefs needed to put away the game, Edwards-Helaire went for a career-best 52 to set up a clinching field goal.

Herbert was steady and effective early, especially when Mike Williams was the target. Somehow, Rashad Fenton committed two penalties on one play, and Williams still caught a 29-yards pass that set up the Chargers’ first touchdown. L’Jarius Sneed had great position on Williams’ one-handed touchdown reception from 15 yards in the third quarter. But Jaylen Watson’s pick-six for 99 yards (see KC Star of the Game) likely will be remembered as one of the biggest plays of the season.

The Chiefs came up with a big stop just before halftime. Herbert left the pocket on a third-and-short and Chris Jones was credited with a sack. Jones played like a man on a mission in the second half, pursuing Herbert and stuffing the run.

Strange: The Chiefs were flagged for delay of game on a kickoff. Matt Ammendola, signed this week with Harrison Butker hurt, handled kickoffs Thursday and was placing the ball on the tee when the flag flew. He was as surprised as anyone. Punter Tommy Townsend sent one to the end zone, but he also boomed a 74-yarder just before halftime. Rookie safety Bryan Cook drew a pair of penalties, but in the end, this unit got the job done.