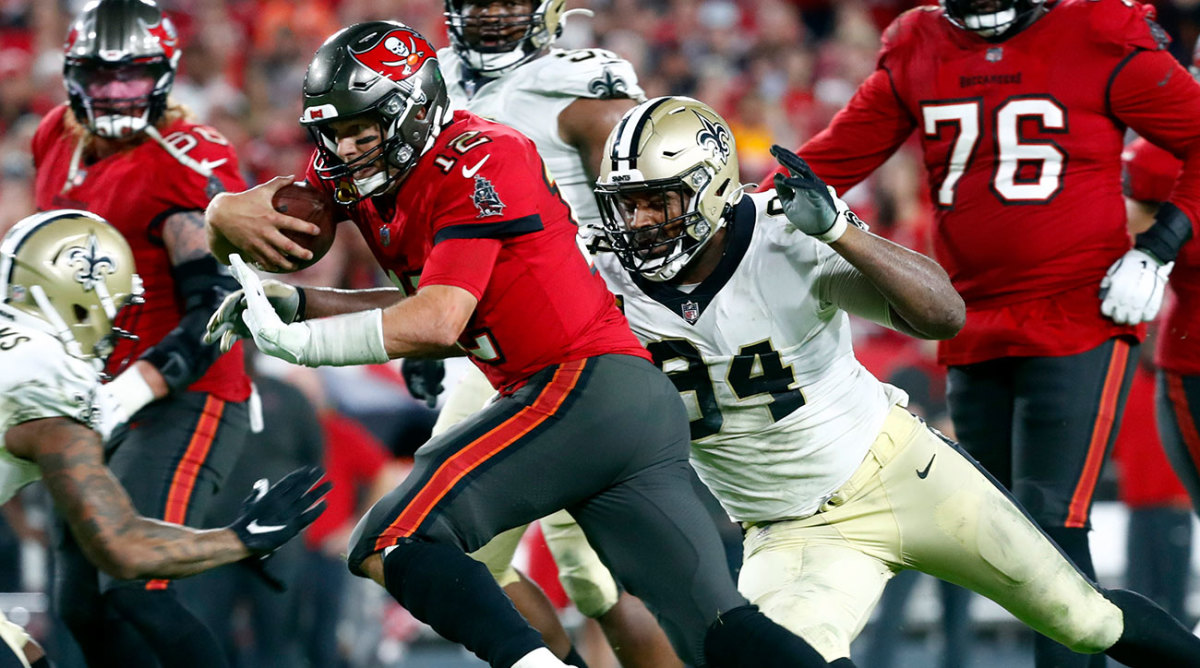 Last year, the Colts, Jets, Jaguars, Giants, Lions, Falcons and Vikings all started 0–2, and none made the playoffs. Meanwhile, the 49ers, Rams, Cardinals, Panthers, Buccaneers, Raiders and Broncos all started 2–0, and only the Broncos and Panthers didn’t make the postseason.

So get ready for another crucial week on the NFL schedule.

And to get it kick-started, Albert Breer and Conor Orr will take you through the Sunday and Monday games, noting the best matchups and what they’ll be watching.

We also encourage you to join us Sunday for our live blog, where we can trade notes and discuss what should be a fascinating week.

GAMES OF THE WEEK

Patriots at Steelers, 1 p.m. ET Sunday: I cannot imagine Bill Belichick ever circled a game in the first month of the calendar and labeled it a “must-win.” That said, there were serious breaks in the Patriots’ protection scheme last week against the Dolphins. The Patriots had the 22nd-best rushing EPA per attempt after a pedestrian performance against the Dolphins. Mac Jones was efficient (21-of-30, 213 yards, TD, INT) if nothing else, but in Year 2, there was hope for growth beyond a plodding drop-back offense. —Conor Orr

Buccaneers at Saints, 1 p.m. ET Sunday: The Saints have won seven of eight against their NFC South rivals, and are 4–1 in the series since Tom Brady got to Tampa Bay two years ago. And the Saints came alive late against the Falcons last week, with Jameis Winston and a revamped receiver group getting traction in the fourth quarter and coming back from 16 down. So this will be a good litmus test to see whether the Buccaneers, who took out a beat-to-bleep Cowboys team, are what they have been the past couple of years. This game should also provide a decent barometer for the Buccaneers’ offensive line, which now has a nicked-up left tackle on top of all its other issues. —Albert Breer

Dolphins at Ravens, 1 p.m. ET Sunday: Lamar Jackson wasn’t forced to scramble (six carries, 17 yards) a great deal last week against the Jets, a team that played surprisingly well against the Ravens’ signature attack. The Ravens were one of the least efficient teams per rushing attempt in Week 1. They won’t have a similar luxury against a more complete Dolphins defense this Sunday, which, despite not having overwhelming pass-rushing numbers, capitalized on free runners when they intended to create them. —C.O.

Cardinals at Raiders, 4:25 p.m. ET Sunday: This one will either affirm what we saw in these teams’ losses last week (the Cardinals got whacked by the Chiefs; the Raiders acquitted themselves in a nail-biter with the Chargers) or just raise more questions on where each team stands. It should help Las Vegas that Chandler Jones is on its side now, as it works through its offensive line issues. Oh, and if Arizona doesn’t rebound here? They have the Rams, a cross-country trip to Carolina and the Eagles after that, with DeAndre Hopkins not returning until Week 7. —A.B.

Bengals at Cowboys, 4:25 p.m. ET Sunday: This is a prelude to absolute bedlam in Dallas. I would be willing to put a sizable wager on the Cowboys falling to 0–2 and the Bengals winning by multiple scores. Mike McCarthy’s teams sans Dak Prescott have been somewhat defeatist, begrudgingly winning games to save face in garbage time. I heard a good point made the other day on judging McCarthy without his starting quarterback: Why else would you need a head coach, and at what other time would you learn about his abilities save for an emergency? —C.O.

Vikings at Eagles, 8:30 p.m. ET Monday: Suddenly, the Vikings are cool again—Kevin O’Connell’s made a difference quickly in that building, and it showed in Week 1. And this is a chance to make a statement that Minnesota is a real contender in a weakened NFC against a real contender (the best player in this one, Justin Jefferson, might have a little draft-day score to settle, too). —A.B.

What is your one big prediction for Week 2?

Orr: The Jets hang a 40-burger on the board this week against the Browns. Robert Saleh went to bat for his young team. The normally zen coach motivates a team that will find rhythm in the running game against an excellent Browns front.

Glaciers: Romeo Doubs and Christian Watson combine for more than 150 receiving yards. Matt LaFleur and his staff have taken a calculated risk in giving the rookies so much playing time early—both were on more than half the Packers’ offensive snaps last week. The idea, of course, is that force-feeding them playing time will quicken their development. I think that’ll lead to some early flashes from the two, and I think we’ll get one Sunday night.

Which team most needs a win in Week 2?

Orr: The Broncos. Monday night’s loss to the Seahawks became a thing, and no one quite got Nathaniel Hackett’s point at his day-after press conference about 20/20 hindsight. Still there are some lingering questions I have that have nothing to do with in-game decision-making. Mainly, how does Russell Wilson look, and what offense is he running?

Glaciers: The Cardinals. It was a really weird offseason in Arizona. And so it’s one of these teams that, as I see it, needs confidence-builders early in the season. The schedule’s not easy early, so building momentum won’t be easy to come by. Meaning an upset in Vegas would go a long way—and a convincing loss could send this group the other way.

Which coach or player is most under pressure in Week 2?

Orr: Since we’ve already talked about Hackett and Saleh, I’ll throw Colts coach Frank Reich into the ring. While he’s not going anywhere, the optics of starting winless against the two worst teams in the division is troubling. The Colts (0-0-1) take on an improved Jaguars (0–1) team Sunday.

Glaciers: I’ll go with Saleh since Conor didn’t. He made the receipts comment. He confidently declared Joe Flacco is the man for the job now. And this week he gets the Browns, a team the Jets should be right there with at this point in their rebuild. And he gets those Browns without their starting quarterback. So a loss here would be tough.

Which team will everyone be talking about after Week 2?

Orr: The Giants. They’ll be 2–0, Saquon Barkley will be among the league leaders in rushing, and we’ll all wonder what could have been with this nucleus of players over the past few years.

Glaciers: The Bengals. Playing in Dallas gives you the shot to play on the big stage. And had it not been for their long-snapper getting hurt last week, which is about as freaky an occurrence as you’ll get, the Bengals would’ve overcome five turnovers to beat the Steelers. I think we saw real resilience from the Bengals last week. I think we’ll see determination this week—and they’re getting the Cowboys at the right time.

Orr: Have you ever walked off the beach on a 90-degree day and put your bare feet on blacktop that has been baking in the sun? Kind of like that.

Glaciers: Jerry Jones is more patient with his coaches than people think—his history has never been to pull the plug haphazardly. That said, if they look dysfunctional in a loss, then the Sean Payton conversation that’s been sitting and waiting on the hot-take backburner will be front and center Monday.

Which underdog has the best shot to win outright in Week 2?

Orr: I don’t know about a best shot, but I have a funny feeling about the Jets this week. The Browns needed a great deal of help to edge (26–24) a bad Panthers team a week ago, and while Joe Flacco is essentially shark food for Myles Garrett, he’ll be getting rid of the ball quickly.

Glaciers: It almost seems like cheating to say the Vikings because it’s a two-point spread on the road. But the answer is the Vikings.

Orr: I’d also keep an eye on the Rams this week. Many teams are going to lose to the Bills this season, but not many will lose to the Falcons. Arthur Smith is a good play designer who had some really interesting concepts last week against the Saints and nearly clipped a much better Saints team in the opener. If the Falcons can somehow make this one close, a bright spotlight gets put on the health of Matthew Stafford’s arm, the long-term viability of the Rams’ offensive line and a defense that relies heavily on a few players.

Glaciers: This might sound weird, but I’m actually a little intrigued by the Texans. Davis Mills looked really solid in the opener—like Houston might actually have something there—and the team hung in there against a pretty talented Colts team. I’m not calling an upset in Denver, but … if you look at that spot, the Broncos are coming off an emotionally charged loss on a Monday night, and I think it’s fair to wonder how they come out of that. So I’m keeping an eye on the Texans this week.