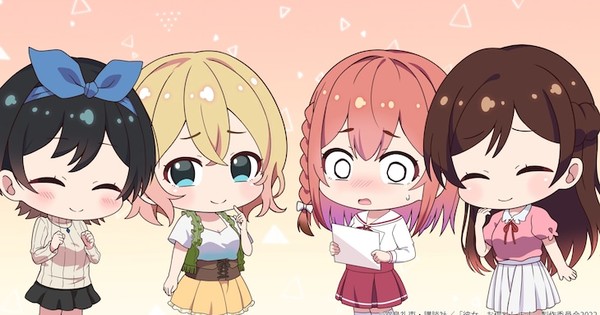 The second anime season based on Reiji Miyajima‘s Rent-A-Girlfriend (Kanojo, Okarishimasu) manga ended early on Saturday with an announcement that production on a third season has been green-lit. The announcement came in the form of a “Rent-A-Girlfriend Petit” short featuring the four main female characters:

The anime's official Twitter account is giving away a recording script of the second season's 24th episode (autographed by the cast), and the cast will appear at an event for the second season next March. The first Blu-ray Disc volume for the season will bundle an early application form for tickets.

The second season premiered in the Super Animeism programming block on MBS, TBSand 26 affiliates on July 1 at 25:25 (effectively, July 2 at 1:25 a.m.). Crunchyroll will stream the anime as it aired.

The first anime season premiered on the Animeism programming block in July 2020 and aired for 12 episodes. Crunchyroll streamed the anime worldwide except in Asia.

Kinoshita Kazuya is a 20-year-old failure of a college student. He managed to kiss his girlfriend once, but was dumped after a month. “Ugh… Damn it. I never want to go through that again.”
Completely spiteful, Kazuya uses a certain method to date a girl. He goes to their meeting place and suddenly hears,”You're Kazuya-kun, right?” A beautiful girl brushing her long, black hair behind her ear was there, smiling at him. Her name was Mizuhara Chizuru. Something real is born after just a single rental! A reckless rom-com filled with love and excitement is about to begin!

Miyajima launched the manga in Kodansha‘s Weekly Shōnen Magazine in July 2017. Kodansha Comics is publishing the manga in English.

The manga also inspired a live-action series that premiered on July 2.