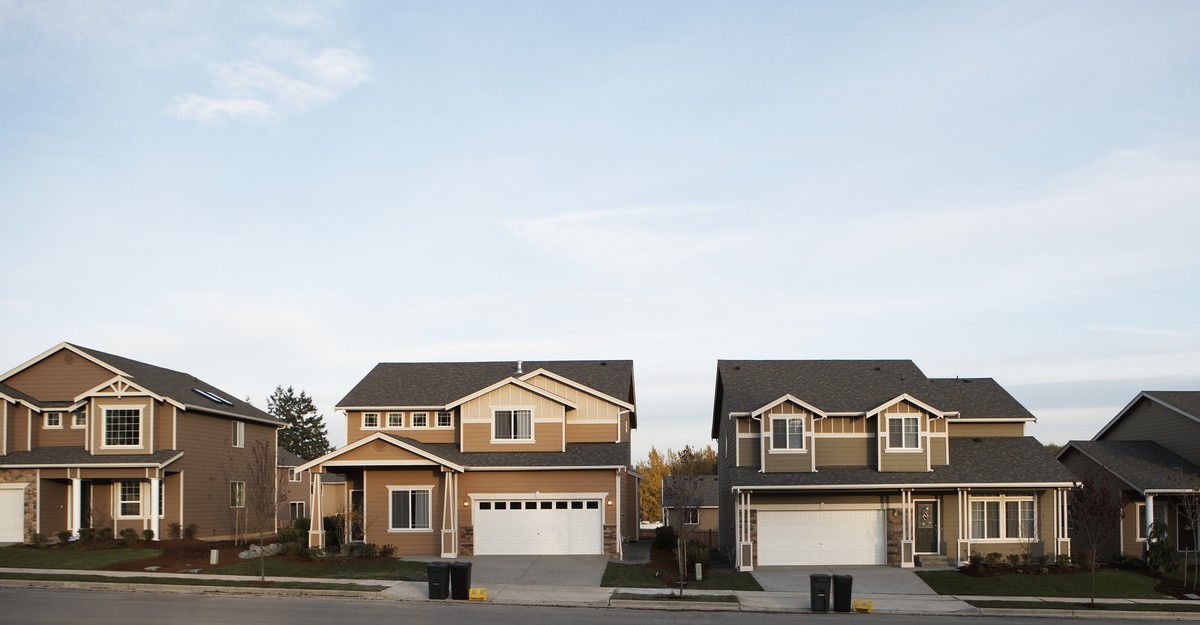 This is an edition of The Atlantic Daily, a newsletter that guides you through the biggest stories of the day, helps you discover new ideas, and recommends the best in culture. Sign up for it here.

But first, here are three new stories from The Atlantic.

“A Drill and a Credit Score”

Amanda Mull really doesn’t like gray floors. Sure, part of her aversion is aesthetic—“the reality is that gray is not that versatile,” she told me—but she’s more concerned with what the floors tell us. “In my work, I often take something that has become super common and try to figure out why it’s happening,” she said.

Isabel Fattal: When you shared your recent story on Twitter, you wrote“Can I interest you in my grand unified theory of the U.S. housing market as explained by gray vinyl plank flooring and barn doors.” Tell us your theory.

Amanda Mull: These types of doors and flooring (basically, fake wood with gray finishes) are particularly popular among people who are redoing homes as investments, either house flippers or landlords.

Gray finishes are pretty cheap, and they have a big potential upside in the rental or resale market, because that’s what people see when they enter a home. And gray floors have not been popular at any point before the past 10 or so years, so if you as a renter or buyer walk into a home and see gray floors, you’re like, “Oh, somebody has just redone this place.” It gives it that feeling of newness.

Isabel: How did the feeling of newness—even in a place that’s not actually new—become such an important part of interior design?

Amanda: Newness is really important in American consumer life, especially in the past 15 years. We’ve seen across consumer categories this emphasis on having the latest and greatest. Most people are familiar with this in the arena of fast fashion. The things you have feel disposable, because they cost very little on a per-piece basis, and there’s a constant barrage of new stuff available that’s also very inexpensive. You get to the point where it feels like having something for a long time is a chump’s game.

In the housing space, the opposite has happened. We as a country have really slowed down in building new housing, and that has created price issues. Housing is very expensive, and what you get for your money is worsening. When homes are old, and the buying or renting public is used to newness, if you can create a sense of newness inside these older homes, you can charge more. Largely, that ends up being surface-level stuff that does not enhance the livability of the home and doesn’t even necessarily make it a more aesthetically pleasing space.

Isabel: How do potential buyers or renters get fooled by talk of “updates” that aren’t actually improvements?

Amanda: What people are trying to do when they look at a place where they might live is just to figure out if it’s functional, and that can be difficult to evaluate on the surface level. So people tend to look around and think, Okay, well, the appliances are new, the floors are new, this stuff should hold for a while. A lot of people who have moved into recently renovated apartments end up finding out Oh, this wasn’t done properly or This was done using the cheapest materials.

Because of the precarious position that a lot of people are in with housing in the U.S., and because of how hard it can be to get your offer accepted, you have this sense of scarcity. In those situations, some gray floors and a tile backsplash, and you’re like, Okay, somebody did something to this; let’s write an offer or apply before someone else sees it.

Isabel: You write that “all told, nearly a third of American house sales last year went to people who had no intention of living in them.” How is the current economic moment affecting the trend of house flipping?

Amanda: I don’t think it’s overstating it to say that gray floors are a physical manifestation of the economic realities of American life. For a lot of people, homeownership is a path to financial stability, and it’s the path that’s most common in America. Because housing is a good investment, a lot of people are interested in it who aren’t interested in living in those homes that they buy: Especially since the United States is not building a lot more housing, it’s a really attractive asset for institutional investors, property managers, and flippers. There are a lot of people dissatisfied with their careers and wages looking for something else to do that is cash positive.

Isabel: Your piece is called “The HGTV-ification of America.” Why do you think home-renovation shows are so popular?

Amanda: The biggest thing that made me want to write this article is how much HGTV I have consumed in my life, which is a frankly embarrassing amount. I find it fantastically entertaining. It’s interesting to see how people think about their homes—their private realms—and how our homes become what they are. And it’s interesting to fantasize about what our homes could be, with a little bit of elbow grease or a home-equity line of credit or whatever.

Some of the most popular shows on these networks are about big renovation products, and specifically about flipping. They became very popular in the aftermath of the financial crisis, when there was a lot of distressed housing available for very, very cheap. If you’re a little bit handy and have done some stuff around your house, you watch enough of these house-flipping shows on HGTV and think, I could do this. I have a drill and a credit score. I don’t think all of the blame for this lies with HGTV, but they’re running an instruction manual on how to do it.

What They Aren’t Telling You About Hypoallergenic Dogs

As someone with dog allergies who nevertheless has been around many dogs as a trainer, a fosterer, and an owner, Candice has learned not to trust the promise of a “hypoallergenic” dog. She’s met low-shedding, hypoallergenic poodles and Portuguese water dogs that supposedly shouldn’t trigger her allergies yet very much did. But she has also met fluffy, longhaired breeds such as huskies and spitzes that set off nary a sneeze. “I’ve had more misery with short-haired dogs,” she told me. That includes her own Belgian Malinois, Fiore, with whom her symptoms got so bad that she started allergy shots. Fiore’s equally furry full sister Fernando, though? Totally fine. No reaction!

Candice—whose last name I’m not using for medical-privacy reasons—is not alone in discerning no rhyme or reason to which dogs she’s allergic to.

More From The Atlantic

Read. LessonsIan McEwan’s new novel, is an anti-memoir that reflects on the author’s charmed life—and all that could have gone wrong.

Watch. Fall is coming, and so is comfort-movie season. Start with One Fine Dayavailable to rent, a ’90s rom-com that ends with “the movie equivalent of a warm bath.”

Amanda recently wrote about why non-U.S. candy is superior to the American stuff, so I asked for her current favorite. “Panda strawberry licorice from Finland,” she told me. “It tastes amazing, has a perfectly chewy texture, and isn’t cloyingly sweet like a lot of American versions of red licorice.” (If you’re in the New York area, she buys it at Perelandra Natural Foods in Brooklyn Heights.)