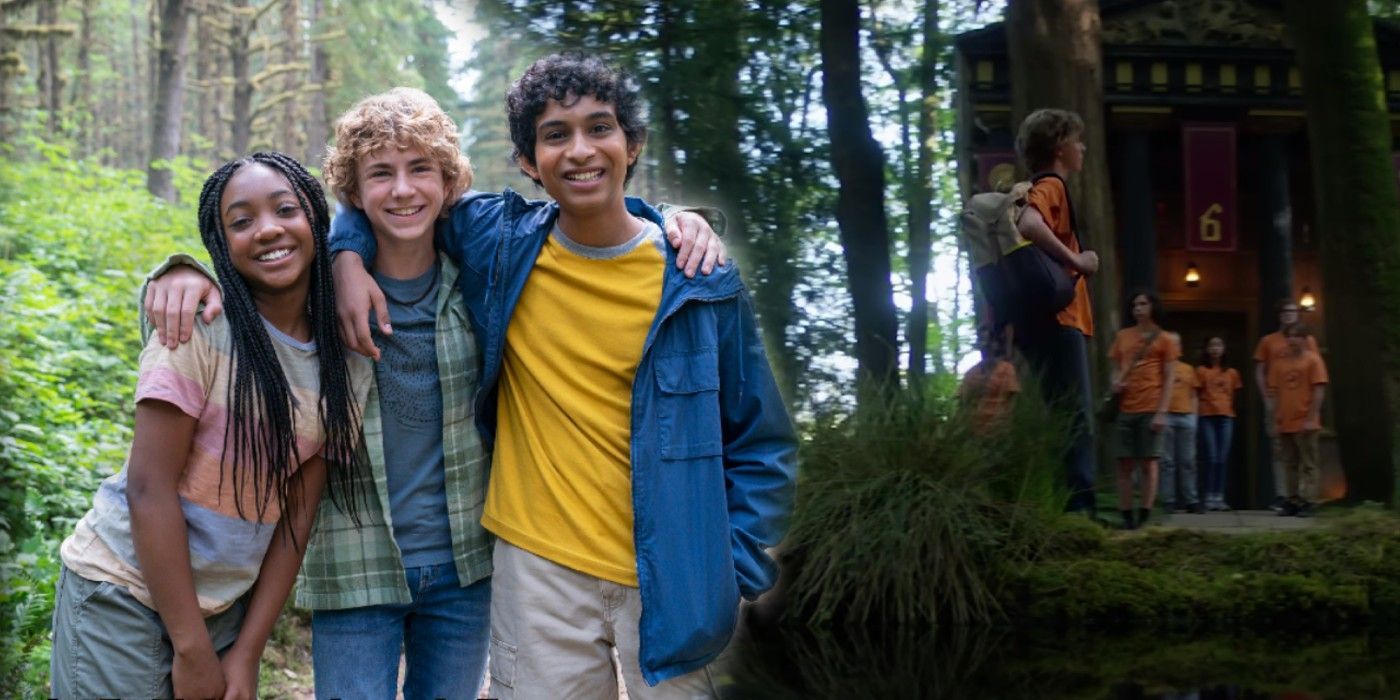 Ever since the Percy Jackson and the Olympians series was announced, fans have been desperate to see how closely it will adhere to the text. The books were first adapted into a film series in 2010, but the films strayed from the books in tone, details, and even the plot itself. Author Rick Riordan promised fans that the new series on Disney+ would do better, with his guidance throughout.

The casting of age-appropriate actors was the first step in rebuilding that trust, but the release of a teaser trailer on September 10th gave fans their first real taste of the series. The teaser trailer, while not spoiling much of the plot, comes across as a love letter to fans of the books, ignoring flashy moments in favor of accuracy to the books, which can be seen in every detail.

The teaser trailer prominently displays a signpost pointing the way to the Archery, Stables, and Camp Cabins. While the books don't mention a specific sign that points out all of these areas, it's the way it's written that makes such a big impact. The letters alternate between the English alphabet and the Greek one.

While the Greek letters in question aren't actually comparable with the English letters they're meant to be replacing (Σ is an S, not an E), it may be a way for the show to represent the characters' dyslexia. Annabeth explains, “The letters float off the page when you read, right? That's because your mind is hardwired for ancient Greek.” It would only make sense for the audience to likewise see written words as a blend of English and Greek.

While it isn't explicitly stated how old the campers are, fans know that Annabeth arrived at camp at age 7, and there are very few adult demigods. In fact, Percy is shocked to learn that living to adulthood is common at Camp Jupiter, which shows just how uncommon it is at Camp Half-Blood. With that being said, it seems like most kids are somewhere between 10 and 16.

This was a huge reason that the film adaptation of Percy Jackson failed. Percy never would have been able to survive to 16 without learning about his heritage, and the age of the actors made it less horrifying to think about how many died young. Thankfully, the trailer shows that the age-appropriate casting was a focus for the stars and the extras, which does a lot toward making the series more book-accurate.

As Percy walks past the various cabins to reach Poseidon's, his reflection shows in the water a possible homage to his godly heritage. However, while fans might be inclined to consider it as the creek he discovers his powers in, this is almost certainly the camp's lake instead.

According to the books, the canoeing lake is near where “the trail led back to the cabins.” It is also positioned near them on the camp map on Rick Riordan's website. While it may not be overly significant which it is, either suggests deliberate planning on the showrunners' part.

It takes some searching to catch every detail in the teaser trailer, but fans noticed that Percy's shirt sleeve is cut at the 15-second mark. This had to have been a deliberate choice, and it actually tells the audience a lot about when the teaser takes place.

While the only time Percy's shirt is explicitly ripped is during his fight with Ares, he wouldn't be in his camp shirt at that point. Earlier in the book, though, Percy gets ambushed by the Ares cabin, one of whom “slashed his sword across my arm, leaving a good-size cut.” While the cut quickly faded and then disappeared, the shirt would still be torn, exactly as it is in the trailer.

6 Clarisse And Her Electric Spear

While it has not been confirmed, the central figure at the 25-second point is most likely Clarisse, who is frequently considered to be the Draco to Percy and Annabeth's Harry Potter. Clues that this is Clarisse include the red plumage on the helmets and the scarf around her wrist, her prominence among the other campers, and her iconic spear.

In the book, Clarisse is thirteen or fourteen years old, and the clear leader of the Ares cabin. She has a unique weapon, a gift from her father, which is described as “a five-foot-long spear, its barbed metal tip flickering with red light.” Clarisse is frequently associated with the color red, which is specifically referenced with the Ares team helmets' plumage.

According to Percy, Camp Half-Blood's cabins were “the most bizarre collection of buildings I'd ever seen … they looked absolutely nothing alike.” Their individuality helped fans visualize the influence of the gods and their unjust treatment of their children in a clear and material way. In the trailer, fans see what appear to be the Apollo, Ares, and Poseidon cabins, which are right in a row according to Riordan's website.

While the cabins don't fit their book descriptions perfectly, they have some of the most significant factors. The Apollo Cabin, which was described as “made of solid gold,” is painted yellow, with a depiction of Apollo's lyre on top, and the Ares Cabin is suitably red, though it wisely dropped the barbed wire. Sadly, the Poseidon Cabin is least like its book depiction, which was supposed to be “long and low and solid.” Even so, the individuality of each cabin is key in the books, and that effect was certainly there in the trailer.

Percy unpacks a leather necklace from his bag, which he can be seen wearing a few scenes later. This is the iconic camp necklace, though it isn't very recognizable without any beads. Luke and Annabeth both began the series with “a leather necklace with five different-colored clay beads.”

RELATED: 8 Best Movies Or TV Shows Based On Greek Mythology, According To Reddit

Percy doesn't get his own until the end of his quest, at which point he receives a bead painted in his honor. Technically, Percy shouldn't have an empty necklace at any point, but the imagery really communicates how new he is in comparison to many other campers.

One of the most iconic parts of the Percy Jackson series is the camp shirt, and it was extremely disappointing to not see that in the film adaptations. However, according to Rick Riordan's website, actor Walker Scobell was wearing his own Camp Half-Blood shirt when he found out he'd gotten the part, and the fan response to that moment may have convinced the showrunners that it was a necessary detail.

In the book, the shirt is described as “a bright orange T-shirt that said CAMP HALF-BLOOD.” While it's not explicitly mentioned in the books, most interpretations of the shirt also include a Pegasus image. The version of the shirt in the trailer had all those details, as well as a Greek Meander pattern surrounding the Pegasus.

According to Rick Riordan, the owls featured in the trailer just happened to be there while they were filming, which he took as a blessing from Athena. Despite it being coincidental, it was certainly used to full effect in the trailer.

The owl is the classic symbol of Athena, and the fans find owls important because of their connection with Athena's daughter, Annabeth. Annabeth is not in the teaser at all, but the curious owls, following Percy as he moves through camp, symbolize her critical role in the upcoming show.

Those who have read the Percy Jackson and the Olympians books should have immediately recognized Percy's words since they are nearly word-for-word accurate to the first page of the book. While some sentences moved and a few words were changed to adapt the lines for a series, Percy's personality still shines through.

Fans have even lined up the trailer's audio with the book on TikTok, and the phrasing really is perfect. These words are iconic, and they sent a thrill through every fan who heard them because they are proof that this series is for the book fans, who have waited far too long for the adaptation they deserve.

NEXT: 10 Ways The Disney+ Percy Jackson Show Is Righting The Wrongs Of The Past Films