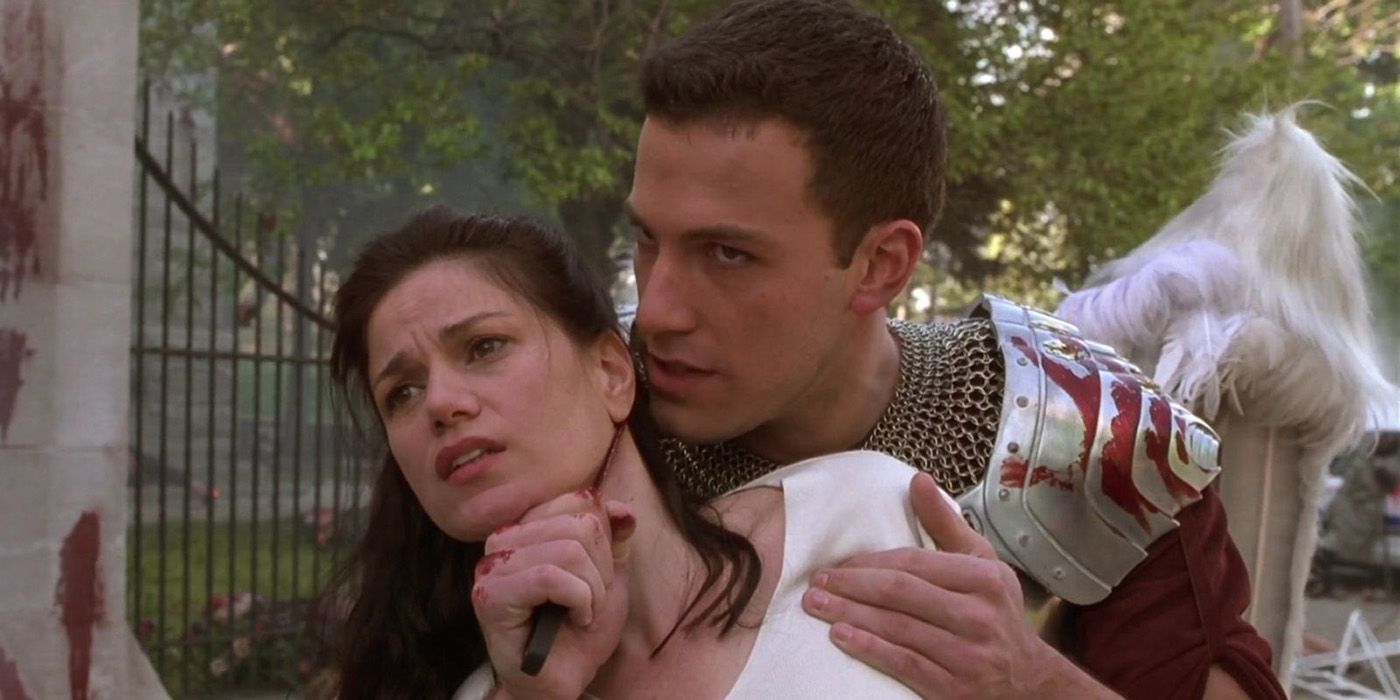 As audiences eagerly await the return of the View Askewniverse, Kevin Smith opens up about why Dogma‘s streaming rights are being held hostage. The 1999 fantasy comedy starred Linda Fiorentino as an abortion clinic counselor who learns she is the last blood relative of Jesus Christ and tasked with stopping two fallen angels from using a loophole to enter Heaven, and subsequently undo all creation. Alongside Fiorentino, Dogma featured a star-studded roster including Ben Affleck, Matt Damon, George Carlin, Chris Rock, Jason Lee, Salma Hayek, Jason Mewes, Smith, Alan Rickman and Alanis Morissette, among others.

Dogma became the subject of much controversy at the time of its release, with many religious groups slamming it for is perceived blasphemous content, but nonetheless received moderately positive reviews from critics and was a box office success, grossing over $44 million against its $10 million production budget. Much like Smith's other View Askewniverse films, Dogma has garnered a large cult following, which has only intensified as the movie has largely gone out of print due to rights issues with the distributors, Harvey and Bob Weinstein. Over 20 years later and Dogma has yet to make its way to streaming platforms, or get a new home media release, and now audiences are getting a little more insight into why.

While speaking with The Wrap to discuss Clerks IIIKevin Smith discussed the issues behind Dogma‘s home media rights. The writer/director stated that the ball is still in Harvey Weinstein's court to sell him the rights, but said that the producer is holding the rights “hostage” and that he's asking for far too much money for the film. See what Smith shared below:

I found out that he was trying to sell the rights to the movie. [He was asking for $5 million, which was] overvaluing the movie. [To Smith's lawyers] Please tell that company that I’ll have nothing to do with it, if he’s still attached to it. I’ll work on a ‘Dogma’ anything, as long as he has no more ties to it. [We reached out to buy the rights ourselves] which we felt very dirty about because we didn’t want to give him money. But at the same time, it’s like my movie, and he’s got it​​​​​​​. He’s holding it hostage. My movie about angels is owned by the devil himself. And if there’s only one way out of this, maybe we could buy it away.​​​​​​​ [We sent an offer that was] scoffed at, [then a higher offer that was] also scoffed at​​​​​​​. Look, I love ‘Dogma’ as much as the next guy but a) I don’t have $5 million and b) that’s not what the market bears anymore. We live in a streaming era. The last I heard was from a different company, saying he wouldn’t sell me my movie back​​​​​​​. I thought what else can I do? There’s not much. You can make a public stink, but I don’t think that guy reads the news anymore.

Smith has previously indicated that Dogma‘s lack of a streaming release or updated Blu-ray/DVD edition was due to the Weinsteins' involvement with the film, as they had purchased the rights to the film to distribute through Miramax. Interestingly, this is the first major update Smith has given on his efforts to get the rights back himself, namely his offering to purchase them from the Weinsteins, only to have multiple offers rejected. Those familiar with Harvey Weinstein's dramatic fall from the industry are sure to take appreciation in Smith feeling “very dirty” to even be offering money to the now-jailed former Hollywood producer for Dogma‘s streaming rights.

While Smith doesn't specify how much his offers were worth for Dogma‘s streaming rights, the door may not be closed entirely for him to afford them someday in the future. The filmmaker is currently partnered with Lionsgate for the long-awaited Clerks IIIand with the film scoring generally favorable reviews, and Smith developing Tusk 2one can hope that one of the films takes off and allows him the chance to get his film back from Weinstein. Until that time comes, audiences can catch Smith's latest project with Clerks III now in select theaters, with a premium video-on-demand release date expected to be announced soon.