Caius – Someone 2 Take Ur Place

Five takeaways from the Sooners’ rout of Cornhuskers 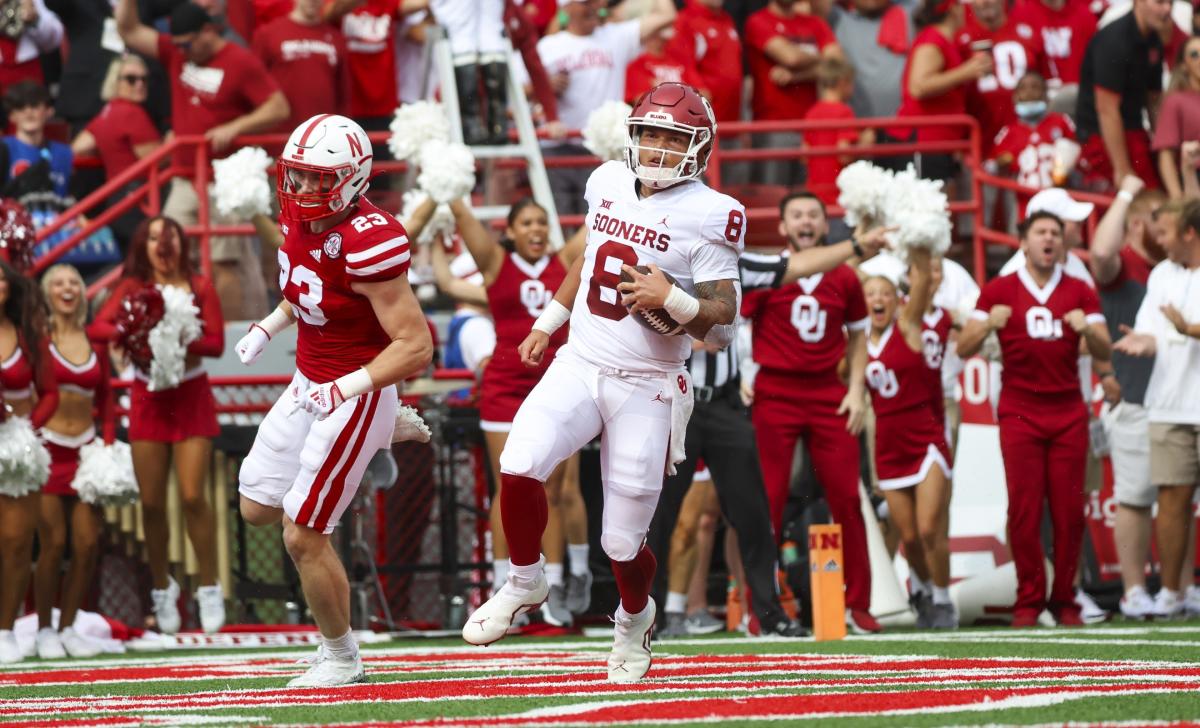 But the Sooners whipped up on Nebraska, 49-14, on Saturday at Memorial Stadium.

After punting on the game’s first drive, the Sooners scored touchdowns on six of their next eight drives.

But not everything was coming up roses for OU.

Quarterback Dillon Gabriel went just 11 of 20 in the first half, often missing his target.

But even on his misses, Gabriel didn’t much give Nebraska a chance to turn those mistakes into turnovers.

That made a big difference, as even without their best stuff behind center, the OU offense was plenty productive.

Still, though, it was the most points the Sooners have ever scored at Nebraska. The previous high mark was 48 in a shutout victory in 1949. It was just OU’s seventh time beating Nebraska by 20 or more points in Lincoln.

The Sooners converted 10 of 16 third downs.

OU “cheetah” DaShaun White had a strong start, leading the Sooners with six tackles early, one of those being a sack.

He also broke up a pass.

But late in the second quarter, White rushed in at Nebraska quarterback Casey Thompson and caught Thompson with helmet-to-helmet contact as Thompson threw.

White was called for roughing the passer and targeting, which was upheld upon review, leading to his ejection.

The disqualification opened the way for freshman Jaren Kanak, who came on in White’s place.

Kanak got a tackle on the second play after White’s ejection. On the next play, he had his sights on Thompson in the backfield, but Thompson ducked the tackle. It didn’t matter much, as Ethan Downs was right behind Kanak and finished off the sack.

On the first play of the third quarter, Kanak hit Trey Palmer for a 21-yard gain but Kanak stripped and recovered the ball.

Kanak ultimately led the Sooners with 10 tackles after totaling seven in his first two games.

Last season at Texas, Casey Thompson made life difficult on the Sooners before OU completed the comeback.

There was no such heroics from Thompson after the opening drive Saturday.

OU turned up the pressure on Thompson, constantly leaving him scrambling around.

The Sooners had four sacks in the win.

Thompson finished 14 of 20 but for just 129 yards and one touchdown.

The Cornhuskers didn’t get on the board for the second time until backup quarterback Chubba Purdy — the younger brother of former Iowa State star quarterback Brock Purdy — ran in for an 8-yard touchdown.

More:Why OU football's win at Nebraska in 1972 was ‘like a volcano exploding' for Sooners

Wanya Morris didn’t start at tackle for the Sooners, but it didn’t take long to make his season debut.

Morris came on on OU’s third drive, making his season debut after missing the first two games for off-the-field reasons.

The Sooners went two-and-a-half games without a turnover before the streak finally came to an end.

Late in the third quarter, backup quarterback Davis Beville fumbled as he tried to hand off the ball, and Nebraska’s Garrett Nelson fell on it.

The Sooners had not gone without a turnover in their first two games since at least 1936.

Through three games, OU is plus-5 on turnover margin after forcing two Nebraska turnovers.

Tramel's ScissorTales: Playoff, TV contracts could get OU and Texas into SEC by 2024