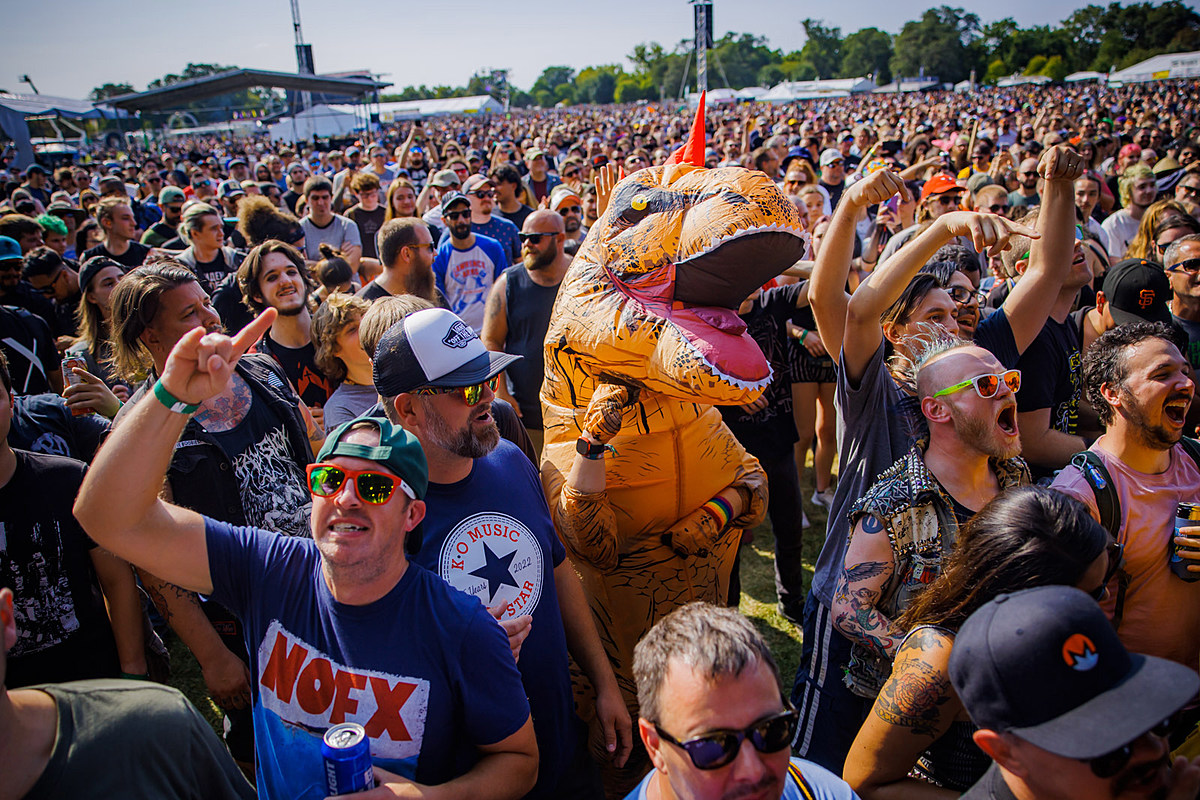 Riot Fest 2022 is underway, and we've got photos and a recap of day one: Friday, September 16. We already posted pics and review of My Chemical Romance‘s headlining set and post-hardcore supergroup L.S. Dunes‘ live debut, and here are some other highlights:

One of the best sets I saw all day was Jeff Rosenstock and his Death Rosenstock band on the Radicals side stage around 4 PM. They had a late start due to some technical difficulties — during which time they led the crowd in a singalong of Weezer's “Say It Ain't So” and bits of some other '90s songs using just the sound coming from their un-mic'd amps and drums — but once they finally got going and launched into “NO TIME” off 2020's NO DREAMeverybody in the crowd ran towards the stage and starting bouncing around and yelling every word, and it was instantly one of the most energetic crowds I was in at the whole fest so far. Jeff just knows how to get a crowd going, and he and his band always inspire a fun and safe environment. (Jeff told the audience that if they see anyone groping anyone or starting shit this weekend, get them out of the crowd.) They did a good mix of songs from all four of Jeff's proper solo albums, but it really seemed like the NO DREAM stuff got people the most excited and that was a very inspiring thing to see. A lot of the bigger bands at Riot Fest leaned on the nostalgia aspect, but Jeff reminded you that he's writing some of the best music of his career right now, and that his new stuff is getting some of the best reactions. Also a treat: Jeremy Hunter aka BECAUSE aka Skatune Network joined for “Nausea.”

After Jeff, I caught the first half hour of Descendents (which, given the length of their songs, was still like 15 songs or something), and they were as great as always. Songs from the ultra classic Milo Goes to College (which just turned 40) were played right up against newer material, and it was nothing but ripper after ripper. Descendents are one of those bands who refine a tried-and-true formula rather than making any drastic departures, and they do it gracefully and always sound timeless. There are still bands today trying to catch up to what Descendents were doing on Milo Goes to Collegeand this band still brings it as a live act with more energy than some bands that are half their age. It shouldn't be taken for granted how lucky we are to still have this band killing it as frequently and consistently as they do.

After leaving Descendents, I ran back over to the Radicals stage for a fantastic set from The Wonder Years. Dan Campbell said on stage that two of his five favorite sets he'd ever played were at Riot Fest, so he felt like he had a lot to live up to, and I can't speak for where he'll rank this one, but it was as cathartic and life-affirming as any Wonder Years set I've ever seen. Their much-anticipated album The Hum Goes On Forever finally comes out next week, and it was a real treat to see them play four of the album's singles, “Low Tide,” “Oldest Daughter,” “Summer Clothes,” and “Wyatt's Song (Your Name).” The new material is some of the most personal and emotionally devastating Wonder Years material yet (no small feat!), and Dan really put his whole body into singing those songs. And the band sounded just as tight and powerful on the new songs as they did on the classics. The new material already feels like a crucial part of the band's catalog, but of course the long-established songs went off and had the crowd screaming every word. They played a great selection of fan faves — “There, There,” “Passing Through A Screen Door,” “Cardinals,” “Came Out Swinging,” “I Don't Like Who I Was Then,” “Dismantling Summer” — and the band was just impossibly tight for every single one.

Watching all of The Wonder Years unfortunately meant missing the first half of Taking Back Sunday‘s set, but when I got there for the second half, they were sounding as great as ever. Taking Back Sunday are Riot Fest regulars, but especially in a year with My Chemical Romance headlining, you knew this crowd was heavy on aughts-era emo kids (many an “Elder Emo” shirt was spotted), and those TBS hits are as canonized as 2000s emo gets. Those songs are something larger than life, but Taking Back Sunday still don't let it go to their heads — they're still just a razor-sharp live band who get by on the power of their songwriting alone. And as Tell All Your Friends enters its 20th year, the bond between these songs and the fans feels stronger than ever. TBS is just undeniable.

Day one also included sets from Rocket From the Crypt, Alkaline Trio, Portugal. The Man, Lagwagon, Holy Fawn, Hot Mulligan. Head below for many more pics from day one by James Richards IV (plus My Chemical Romance pics by Laurie Fanelli).

The festival has also been facing backlash from attendees on social media — a Twitter search for “Riot Fest” brings up a lot of complaints about the lack of water refill stations, lines for food, and crowd safety concerns. The fest has not publicly responded at this time.