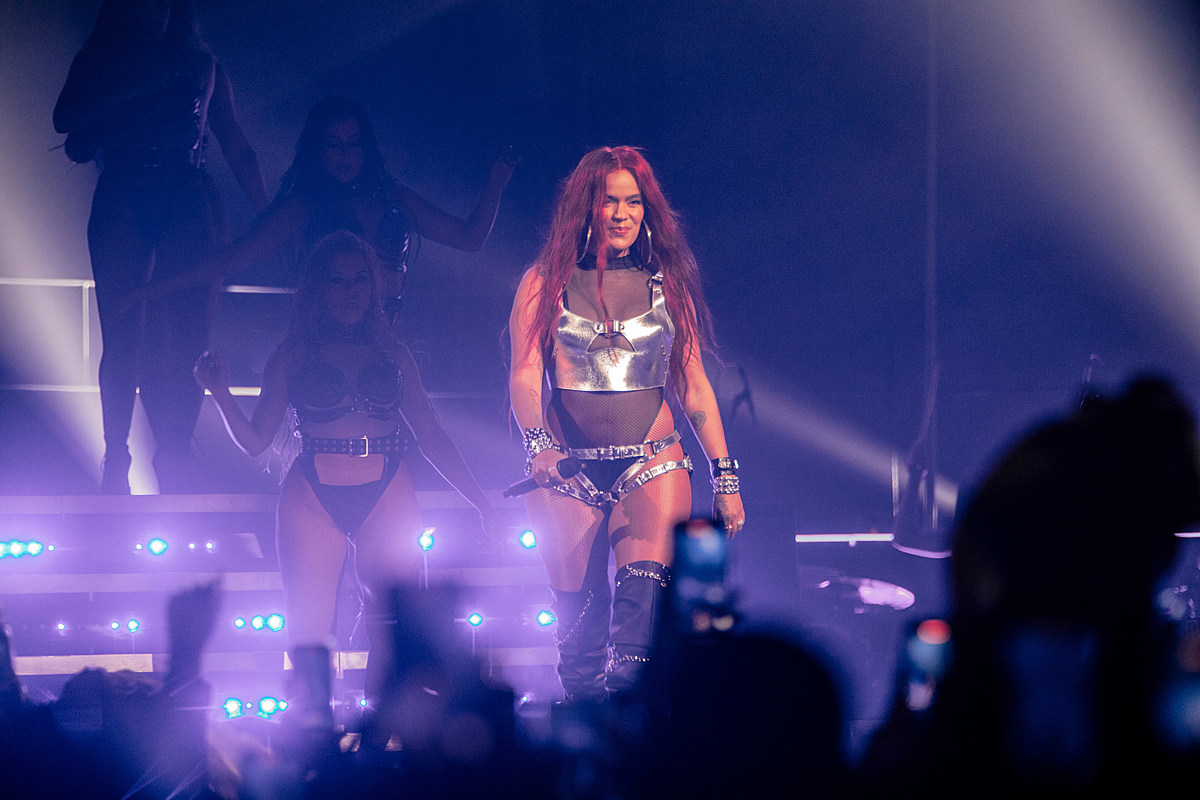 Karol G went all out on production. The backdrop transformed often, at times displaying encouraging typewritten messages, a lavish bar for corrido track “200 Copas”, and an entourage of digital dancers gyrating on poles in high heels. She loaded up pyrotechnics, lazers, sparks, and lights. For “Ocean,” arguably the most emotional moment of the show, a giant 3D moon appeared and began to orbit around the arena. Cellphone flashlights glowing behind it like stars, Karol danced under the moon in a glittering jumpsuit on both nights, embodying a headlining diva through and through. The dancers were absolutely killer, twerking to City Girls, grinding on chairs, and showing actual $trip love on a pole onstage, swinging expertly in clear heels.

For “El Makinon”, she soared through the crowd on a turquoise Ferrari elevated on steel cables. As the car made its way back to the stage and began its descent, Karol rallied the audience as the familiar organ intro of reggaeton classic “Quiero Bailar” took hold of both arenas as she launched into her track “Leyendas,” a super-sampler of reggaeton classics that features Ivy Queen, Zion y Lennox, and Nicky Jam and incorporates Alberto Stylee’s famed sample of the Eurythmics classic “Sweet Dreams.” “Bienvenidos al perreo intenso 2022!” she shouted out. It made for the most fun moment on both nights: Her dancers enveloped the car, leaving no surface of the Ferrari left un-twerked. [Swave Digest]

Colombian pop/reggaeton star Karol G is on her $trip Love arena tour, which stopped in NYC this week for shows at Madison Square Garden (9/13) and Barclays Center (9/15). At MSG on Tuesday night, Karol brought out Ozuna to perform their “Caramelo” remix (their first time playing it live together) and “China,” and Maldy for “GATÚBELA.” She also told the MSG crowd that playing the venue was a dream come true, As Remezcla reports:

An unexpected and touching moment during the show was when Karol G told the crowd about the time she almost quit music and how playing Madison Square Garden is a dream come true: “In 2012, I said I didn’t want to do music anymore because it’s a tough industry. No one wanted to listen to my songs, and no one wanted to give me an opportunity. So I moved to New York, and I started to study English at a school in Manhattan.”

She recounted how she used to sit down on some benches outside Madison Square Garden to practice her English with the people she encountered, but also to dream. “To dream about what could have been if I stayed in music and if I sang at Madison Square Garden. I swear to God, I’m not saying things just to say them or to rile you up. My only intention is to tell you that I started in 2006. It’s now 2022, and it’s the first time I’m selling out this place with a capacity like this. Asi que, sí se puede!”

The Barclays show, which we went to, didn't feature any surprise guests, but Karol did bring a young fan onstage. Check out pictures from Thursday by José Alvarado Jr