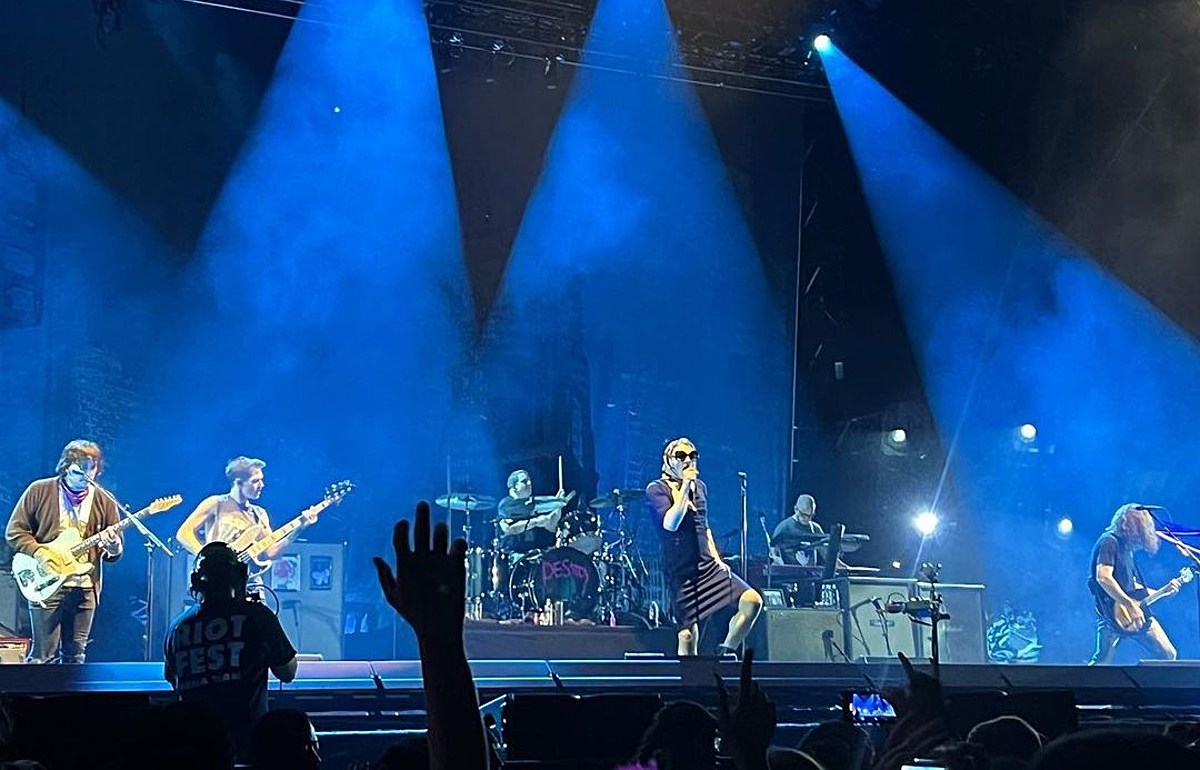 It's been over two and a half years since My Chemical Romance announced their reunion tour, Riot Fest included, and after multiple postponements, MCR finally made their triumphant return to Chicago to headline day one (9/16) of Riot Fest 2022. It was quite possibly the largest crowd I've ever seen at Riot Fest, and Gerard Way had to ask the crowd to take steps back after nearly song and often paused the show for extended periods of time to make sure people were as safe as possible. And in between all those safety checks, My Chemical Romance exceeded all the hype and anticipation that had been building for this long-awaited reunion.

As they've been doing on the whole reunion tour, they opened with their genuinely great new song “The Foundations of Decay,” a heavy, atmospheric, six-minute song that's unlike anything else in their discography. That song alone proves that My Chemical Romance's reunion isn't just about nostalgia, that they've truly got more to say, and even as they got into the classic material, their set never felt like a nostalgia fest. It felt like they had something to prove, or at least re-prove. Their level of extreme popularity grew even greater in the decade they were broken up, and on stage at Riot Fest 2022, My Chemical Romance looked ready to solidify themselves as one of the biggest, most-loved, and most important rock bands of a generation. Still, they had absolutely no ego. They didn't rely on any stadium rock gimmicks to seem larger than life; they were just super tight, super pro, and they still had that punk spirit they developed in their early days in the New Jersey basement scene.

Gerard's been wearing different costumes and outfits at each stop of this tour, and at Riot Fest he donned a headscarf, oversized sunglasses, a dress, and heels. It fit right in with his long history of challenging masculine rock frontman stereotypes, and the whole thing felt like an especially subversive move for a massive headlining festival set like this one — he didn't show his uncovered face once throughout the entire night. As for the setlist, they did a great selection of songs that pulled most heavily from Three Cheers for Sweet Revenge and The Black Parade but did touch on all four of their albums and their non-album singles comp Conventional Weaponsand every song felt just as powerful as the biggest singles. They had thousands of people singing at the tops of their lungs song after song, and the band was a powerhouse. Gerard's voice was in excellent form, the rhythm section of Mikey Way and Jarrod Alexander was airtight, and guitarists Ray Toro and Frank Iero shredded in a way that was genuinely showstealing. Maybe it's partially that you don't know what you've got 'til it's gone, but it felt like My Chemical Romance proved there was even more to them than the world realized during their initial run. And I won't be surprised if there's even more to them that we just haven't found out yet.

Check out the setlist and some fan-shot videos from MCR's Riot Fest below. Stay tuned for much more Riot Fest coverage.

Encore:
I'm Not Okay (I Promise)
The Kids From Yesterday

What credit score do you need to get the Capital One Venture Rewards card?

17-Year-Old Arrested In Connection to Murder of PnB Rock