The best microSD cards for Android devices in 2022 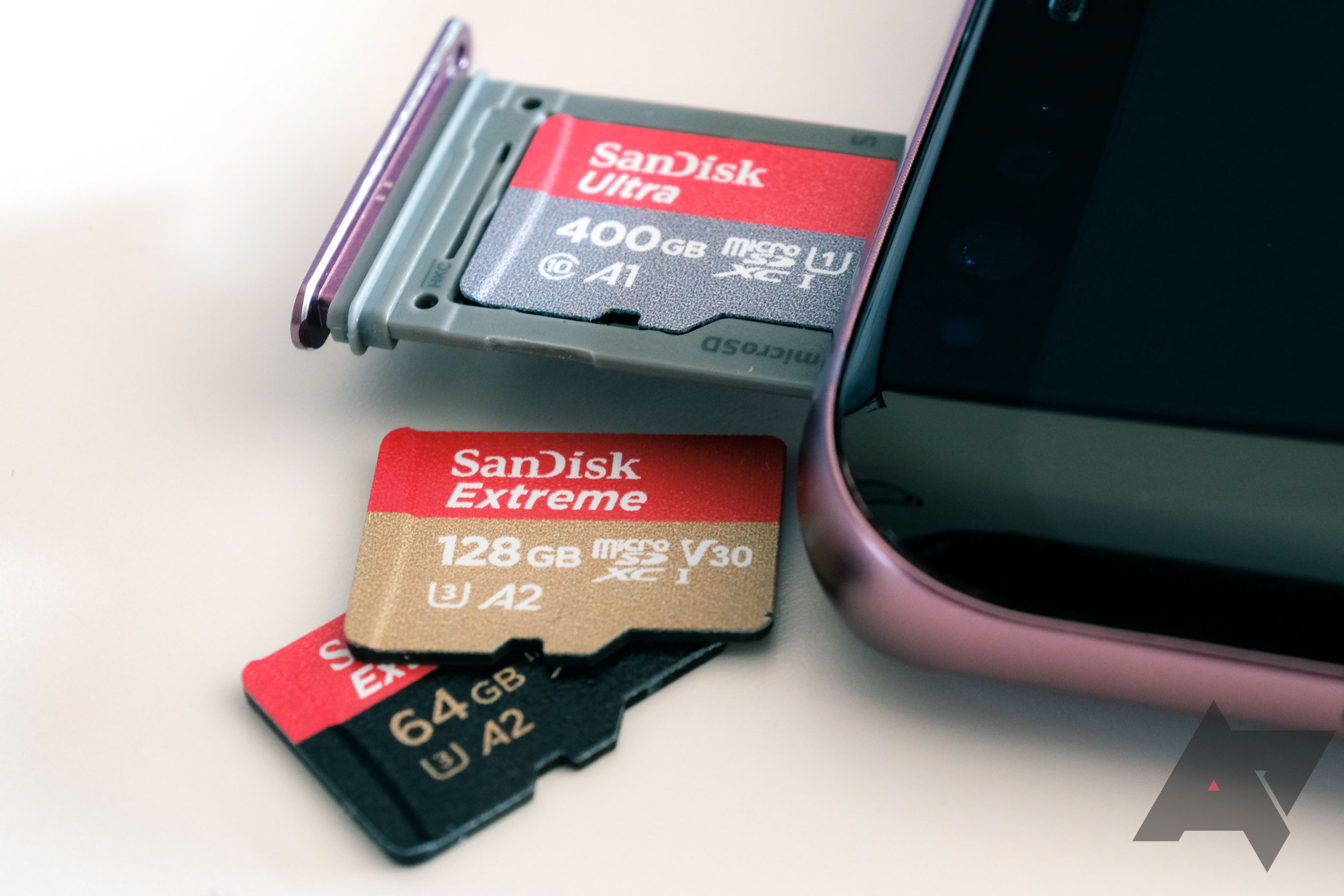 Picking the right microSD card might be a bit overwhelming due to the various marketing claims and jumbled letters plastered on the cards. Some of those specs are simple, such as capacity or peak read and write speeds. Other claims, like endurance and input/output operations per second are harder to evaluate directly, but do still have meaning.

We've rounded up the best microSD cards to help you pick the perfect one for your Android device. The right combination of performance and lifespan stats can add up to a microSD card with peak performance storage capability for Android tablets, phones, Chromebooks, and cameras.

The SanDisk Extreme was already one of the top-performing and most dependable microSD cards before its July 2022 update. Now it's also one of the newest, and offers some reassuring (if not objectively very useful) technology. With the recent refresh, it supports SanDisk's QuickFlow technology, which enables transfer at up to 190 MBps, far beyond the usual UHS-I standard's limit of 104 MBps. Unfortunately, you won't get that kind of speed on a smartphone because QuickFlow requires an explicitly supported SanDisk card reader to work. What it does mean for consumers, though, is that you can trust SanDisk's latest round of microSD cards to get as close to the performance ceiling as reasonably possible.

During objective testing, SanDisk Extreme comes out near the top of the pack even when compared to high-speed units meant for use in demanding cameras. With up to 160MB/s sequential read speed, the Extreme is at the top of the pack for smartphone use. It's also no secret that SanDisk microSD cards are among the most reliable in the long term. Finally, it comes in capacities from 32GB up to 1 terabyte in order to accommodate whatever storage limits the software on your phone or Chromebook might have.

Samsung doesn't just make some of the best Android phones on the planet like the Samsung Galaxy S22, it also makes some of the best flash storage and microSD cards on the market. While this budget-friendly microSD card may not be as fancy as the Lexar 1000x or SanDisk Extreme's 90MB/s write speeds, it performs perfectly well without breaking the bank. It's a great option if you want to store music and movies on your smartphone, but it's not ideal for running apps and high-end smartphones might find it limiting when recording 4K video.

If you want the best speeds and most reliable storage and are willing to make a slightly higher investment than average, the SanDisk Extreme Pro should be on your radar. It's marketed with the same speed classes and IOPS ratings as many of its competitors but actually beats most of the competition in hands-on benchmarking. It's a triple threat, as good for storing photos, videos, and music or for shooting 4K video as it is for running apps. In fact, the only notable strike against it is that it's a touch more expensive than most others.

If you insist on having the highest-performing equipment possible, the premium 1000x from photography-centric manufacturer Lexar has you covered. It uses the UHS-II bus commonly found in high-end cameras and is backward compatible with the UHS-I found in most smartphones. It offers more than enough speed to accommodate 4K, 120 FPS smartphone videos and is the ideal choice if you frequently use your phone to store or transfer large files to a PC via a high-speed SD card reader.

If you only need 128 or 256 GB of storage expansion, the PNY Pro Elite deserves consideration. It lives up to its A2 rating by loading non-critical apps like games and messenger suites with impressive quickness. Despite its affordable price, its overall performance is nearly on-par with the best. However, if you need a 512 GB microSD card or larger, look elsewhere, as this particular lineup has an above-average failure rate at those sizes.

Most of Lexar's memory offerings focus on photo and video cameras, which usually prioritize high sequential write speeds. This one is a little different, as its A2 IOPS rating means it can load, update and manage apps with the best of them. While it won't match the speed of a phone's internal storage, it's perfect if you like to play graphically intensive games that need a lot of storage space. As far as sequential reading and writing speeds go, though, it's a bit behind the pack.

If you're the owner of a relatively recent flagship smartphone and want to make sure you're getting the highest speeds out of your expanded storage, consider the Samsung Pro Plus. It exceeds all the qualifications required for the V30 and A2 standards, and each size performs similarly well, which isn't always the case with high-capacity microSD cards. The only knock against this one is that it's notably more expensive than most.

Here's how to get the most effective microSD storage for your phone and ensure the high performance of features like 4K video without spending too much money.

How important are speed class ratings?

To be blunt, not very. The collection of letters and numbers on the front of SD and microSD cards usually refers to the minimum speeds they're capable of rather than the maximum. You'll commonly see letters like U3, C10, UHS, and others. These letters have specific meanings — for example, the C10 rating means a card can write large sequential files at 10 megabytes per second or faster. Of course, 10 MBps isn't very fast, which is evidence that some of these numbers are redundant or obsolete, and none of them give you a 100% accurate snapshot of an SD card's actual speed in real-world use.

Which microSD card ratings to look for

UHS Class 3 and Video Class 30 mean the same thing. They denote a minimum continuous write speed of at least 30 megabytes per second. This is theoretically fast enough to accommodate 4K video at 120 frames per second, although your mileage will vary in the real world. The U3 or V30 rating is a reasonable baseline to consider when looking for a microSD card that's fast enough for today's advanced smartphones.

These are relatively new compared to the various speed ratings. Instead of measuring a card's ability to read and write individual small and large files, they chart the minimum input/output operations per second that the storage is capable of. Today's Android phones take advantage of high IOPS capabilities, making it easier for the operating system to access multiple small files with as little downtime as possible. IOPS ratings are essential if you're storing and accessing apps on your microSD rather than keeping the programs exclusively on internal storage.

A note on storing apps on microSD cards

Once upon a time, it was readily possible to configure a microSD card to act as expanded internal storage. Unfortunately, today, that's not the case. While some advanced tricks let you combine a smartphone's internal storage and a microSD expansion card, manufacturers have locked most users out of that option.

Believe it or not, this isn't some anti-consumer conspiracy. Your best smartphone experience will come from keeping most apps off your expansion card due to the increased size and complexity of smartphone apps, the massive speed advantage of internal storage, and the ever-present (though relatively small) risk of microSD card failure. Manufacturers design modern phones to benefit heavily from lightning-fast internal storage, and running large apps from a microSD card can lead to poor performance and fatal errors.

It is still possible to store some apps and app data on microSD cards. However, if you plan on doing that, make sure to get a microSD card with an A2 IOPS rating to minimize slowdowns.

You may have noticed that most new high-end smartphones lack microSD storage expansion capabilities. Unlike the disallowance of using SD memory to mimic a smartphone's internal storage, disabling storage expansion is very much an anti-consumer conspiracy. When Apple started this trend, it sent a clear message to other manufacturers: People will pay hundreds of dollars for an additional 128 GB of storage as long as you don't let them use their own microSD card.

To get your hands on the best 256 GB microSD card, you have to give a company such as SanDisk about $40. Then, to upgrade your Samsung Galaxy S22+ from 128 to 256 GB, it costs $180. Of course, from the profit-minded manufacturer's perspective, SanDisk makes total sense — but why on Earth would Samsung enable SanDisk to make a little extra revenue when Samsung could configure its own devices to make considerably more money?

The unfortunate offshoot is that if you want a premium smartphone, you'll almost certainly have to compromise in terms of expandable storage. On the other hand, entry-level and midrange smartphones often retain their microSD card slots, which is more evidence of shifty microSD slot exclusion at the high end. The only reason manufacturers continue to include microSD slots in cheaper phones is that the market for those low-cost devices would rarely, if ever, splash out an extra $100 for only another 128 GB.

The scourge of fake microSD cards

The process some major online retailers use to maintain stock and fill orders makes it possible to buy fake memory cards from supposedly reputable sellers. On the consumer's end, it can be challenging to know whether you're looking at a real or fake microSD card. Fake microSD cards are usually much smaller than their advertised size and, in most cases, work for a short time before issuing a fatal error.

While it's difficult to tell from an online marketplace listing if a microSD card is authentic or counterfeit, there are steps you can take. First, always buy directly from the manufacturer or the retailer itself. Look for those sold by Amazon or Walmart, for example, instead of some random third-party seller.

Once the card is in your hands, look for a misaligned print on the card itself. Search for typos on the packaging and documentation or blatant manufacturing issues like missing pins or overly rough plastic edges. It's also worth comparing a card's colors to official press images from the manufacturer. Counterfeiters often come close to matching authentic color schemes, but they're frequently off by just enough to notice under scrutiny.