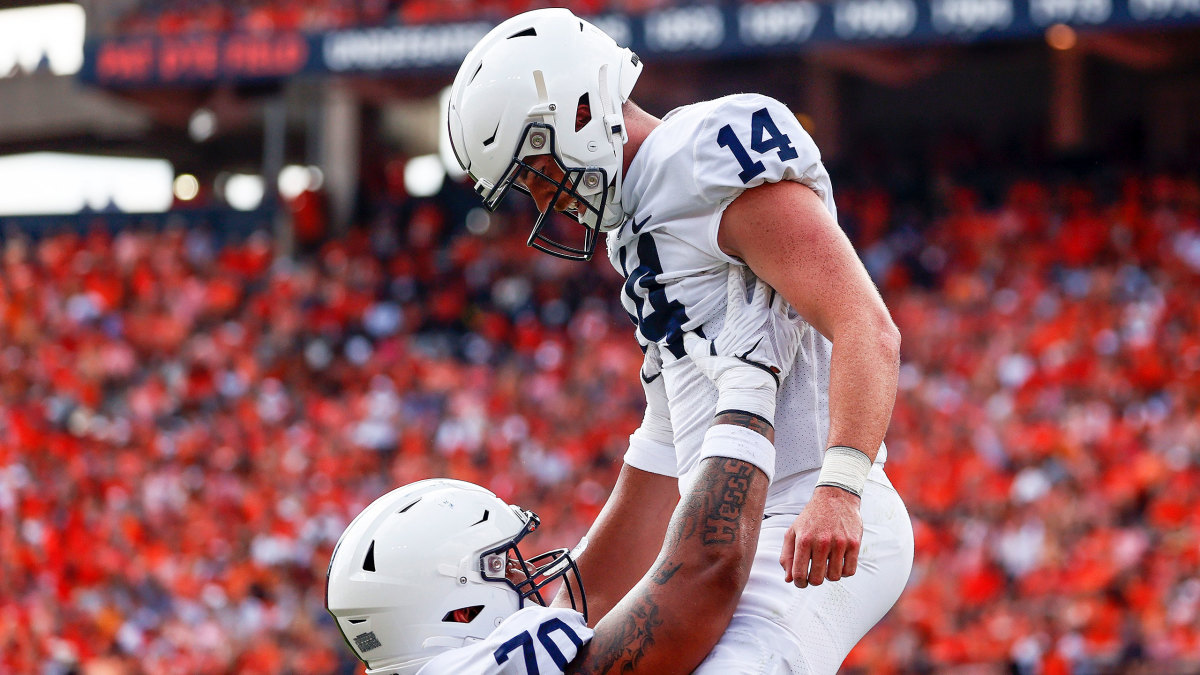 If you were told that Duke, Kentucky and Kansas were all 3–0, you might assume that it is mid-November and basketballs are flying into hoops.

Oh, but no! The Blue Devils, Wildcats and Jayhawks are a combined 9–0 in the sport of football. Indiana is 3–0, too, and so is Syracuse, Maryland, Tulane and Rutgers! It’s a smorgasbord of not-so-football schools playing well in football, and it’s a great thing for the sport. In fact, two of these teams meet next week, when the Dukies travel to Lawrence, Kansas.

Meanwhile, the super conference that is the Big Ten took it on the chin in a few nonconference bouts. The Orange beat Purdue, Washington drubbed Michigan State, Oklahoma pounded Nebraska and FCS Southern Illinois shocked Northwestern, plus the Hoosiers needed overtime to beat Western Kentucky. The Salukis became the first FCS team to get a win over the Power 5 this year, and they walked away with a $550,000 guarantee check, too.

Speaking of underdogs, the Green Wave got to 3–0 by winning at Kansas State, and the Pac-12 got two wins over top-25 teams on the same day for the first time since… 2013! That’s a stat to celebrate and marvel at if you’re out West (it speaks to the conference’s decade-long disappointments in the sport).

Marcus Freeman finally got his first win as Notre Dame’s coach (on attempt No. 4), Hugh Freeze’s decision to go for the win on a two-point conversion failed (Liberty dropped its first game) and Bryan Harsin’s tenure on the Plains took more of a turn for the worst (Penn State rolled the Tigers).

But enough, let’s get to our Top 10. Following colleague Pat Forde’s lead, we are rewarding those teams that have through three weeks played the best against the best competition. If your team didn’t “play nobody,” well then your team probably isn’t making our Top 10.

Georgia appears to be morphing into the program that resides in Tuscaloosa, Ala. Not only do the Bulldogs have a juggernaut defense, but they now appear to have an equally as efficient and explosive offense. In their two Power 5 games this year, the Dawgs scored 49 and 48 points. Against South Carolina, they didn’t have a rusher finish with more than 40 yards, but they had four rushers finish with at least 32 yards. And quarterback Stetson Bennett missed on just seven passes, throwing for two TDs and 284 yards. UGA has outscored its first three opponents 130–10.

There are better résumés in college football, yes. But the Buckeyes did pick up a key victory over Notre Dame and they’ve been dominant the last two weeks over Group of 5 foes. QB C.J. Stroud had the same amount of incompletions (five) on Saturday as he did touchdown passes. Three Ohio State receivers eclipsed the 100-yard mark, too.

The Transfer Portal Trojans haven’t missed many beats this season. And though they haven’t played any real quality competition, they’re steamrolling them: Rice, Stanford and Fresno. Behind QB Caleb Williams, the offense is humming. They’ve scored 66 points, 41 points and 45 points. The new faces in L.A.—quarterback, coach, running back, receiver—appear to be fitting in quite nicely.

Through three weeks, the Nittany Lions have two Power 5 road victories, which is better than most. Penn State won at Purdue to open the season on a Thursday night and then rolled over Auburn on the Plains. Sean Clifford is solid and coach James Franklin’s defense has been salty. Ten of Auburn’s 12 drives ended on downs, with a turnover or punt.

Nick Saban entered the locker room after last week’s win over Texas with a message for his team: practice hard and the game is easy. Whether practice was hard or not, the game sure was easy. The Tide walloped the same program that beat Saban in his first season in Tuscaloosa in 2007. QB Bryce Young threw two picks but also tossed three touchdowns.

We know, we know. The Hogs struggled against former coach Bobby Petrino and his Bears. Missouri State opened with a 17–0 lead and then led 27–17 before Arkansas stormed back with a 21-point fourth quarter. Arkansas remains in our Top 10 mostly because of its solid win over Cincinnati. We’ll know much more about Sam Pittman’s team after next weekend’s game against the Aggies.

The Sooners crack into our rankings after thumping the Huskers on the road, their first game against a Power 5 opponent this season. Though Nebraska doesn’t qualify as a quality victory, Oklahoma’s dominance is enough. QB Dillon Gabriel threw for 230 yards and ran for 55 and Brent Venables’s defense suffocated Nebraska in the first game since the firing of Scott Frost. OU forced a turnover or a punt on 11 straight Nebraska possessions.

Mark Stoops and his football school pushed aside the FCS Penguins and got a nice day from QB Will Levis (377 yards and two TDs). Youngstown had nine first downs, was 0-for-10 on third down and didn’t crack the 200-yard mark. Are the ‘Cats for real? We’ll find out pretty soon. They travel to Ole Miss on Oct. 1, a game that is shaping up to be a meeting of undefeated, top-15 squads.

Are the Vols back? Maybe. They’re certainly playing better than they have in years. Their road win at Pitt is enough to get them into our Top 10, but the real tests come over the next three weeks: Florida, at LSU and Alabama. Imagine what a Bama-Tennessee clash in Knoxville will be like if the Vols can manage to beat LSU and the Gators? It’s been a long while since a Vols-Tide game has held some relevancy.

Gasp! The Jayhawks in the Top 10? Have we had too much to drink? Did we wake up in 2007? Three weeks into the season, Kansas has won road games over a Power 5 team (West Virginia) and a soon-to-be Power 5 team (Houston). Coach Lance Leipold now has won the same amount of road games this season (two) as the last five KU head coaches combined to win in their tenure at the school.