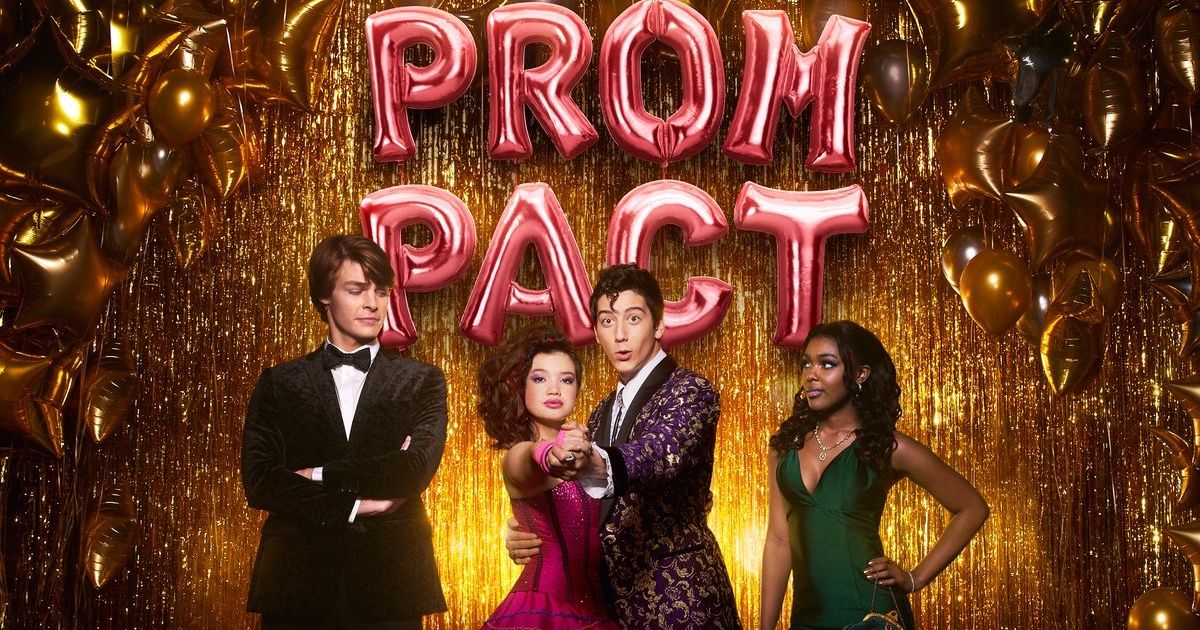 Streaming soon, Disney Branded Television assembled all star cast of Disney talent for Prom Pacta Disney+ Original teen rom-com toplined by former Andi Mack star Peyton Elizabeth Lee, who is also the lead character of Disney+’s Doogie Kameloha, MDwhich was just picked up for a second season; and Zombies triple threat Milo Manheim, who was also a runner-up on Dancing With the Stars on ABC. At D23 Expo 2022 last week, Lee and Manheim told attendees more about the upcoming DBT original film during the first-ever Disney’s Epic Entertainment Showcase: The Musical: The Extravaganza!, and then following the D23 announcement the film's first poster was released online.

Directed by Anya Adams (Fresh Off the Boat), which was written by Anthony Lombardo (American Housewife), Disney's press release says that Prom Pact is a teen romantic comedy set at the height of prom season. High school senior Mandy Yang (Lee) and her best friend and fellow outsider Ben (Manheim) are surrounded by over-the-top '80s-themed promposals. However, Mandy keeps her eyes focused on a different goal: her lifelong dream of attending Harvard. When she finds out that she has been put on the waitlist, she is determined to do whatever she can do to get herself accepted, even if that means asking for help from the one person she abhors – popular all-star jock Graham Lansing, whose father is a powerful senator and Harvard alum. Once Mandy becomes Graham's tutor, she begins to realize there's more to him than she thought and perhaps something more to life than Harvard.

Prom Pact also stars Emmy-nominated actor and comedian Margaret Cho (30 Rock) as Ms. Chen, a sarcastic counselor with a quick wit who helps Mandy with her applications for Harvard. And Monique Green (Big Shot) will be playing popular cheerleader LaToya, with Arica Himmel (mixed-ish) and Jason Sakaki (Devil in Ohio) as Mandy’s close friends Zenobia and Charles, and David S. Jung as her dad, Tom and Wendi McLendon-Covey as Alyssa.

Bowen talked about Prom Pact while it was in development, saying:

The main character is a feminist, and she doesn’t believe in this idea of falling in love. It goes back to Shakespeare: she’s a little bit strident, very type A, and she doesn’t want to believe especially in heteronormative love, because she’s so liberal. But then she falls and there’s that undeniable chemistry.

Prom Pact is currently in post-production and is expected to arrive soon on Disney+, but for now, be sure and check out the film's new poster below: