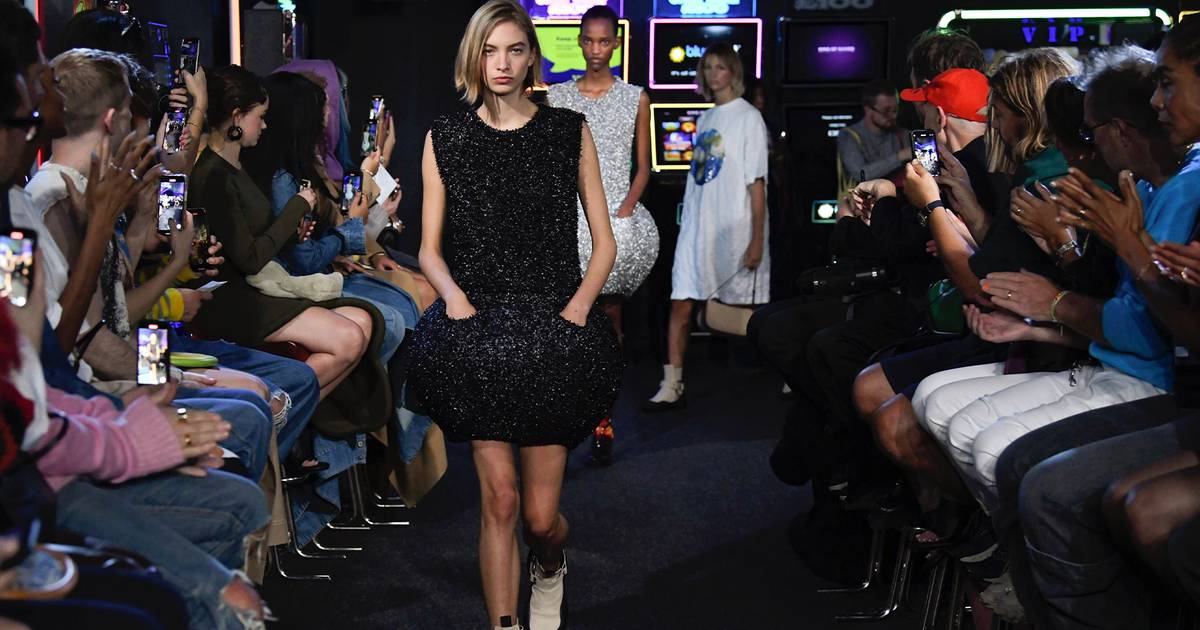 LONDON — This season London Fashion Week was supposed to stage its big post-Covid comeback, buoyed by the return of major labels like Burberry. The death of the Queen, triggering 10 days of official mourning, certainly complicated things. There were some dropouts and schedule shifts. But by and large London Fashion Week forged ahead.

If some worried that tabloid media would portray the shows as frivolous and tone-deaf, damaging the industry’s image, the designers who presented their collections on Thursday, Friday and Saturday made convincing arguments for why the shows matter, not only to London Fashion Week and their own businesses, but to brand Britain.

Indeed, on the early days of the event, the raw creativity that makes Britain’s fashion scene unique shone through, particularly from designers making their debuts. And without the razzmatazz of cocktails and parties, we could all focus our full attention on the clothes.

After three seasons of static tableau-style presentations, Harris Reed’s gender-fluid demi-couture came to life in a catwalk show that recalled the ballroom scene. His jewel-toned silk taffeta creations, some rendered in giant circles, swept past in close proximity to the audience. “People have criticised that sometimes my work is a bit untouchable so this time, I almost wanted people to be hit in the face with silk taffeta — which some people were!” Reed was already thinking about future red carpet moments and awards season appearances. Savvy.

KNWLS staged a show supported by Lulu Kennedy’s new post-Fashion East scheme XLNC. And whilst the KNWLS woman was still living through an apocalypse in cropped shearling jackets and corset-detailed separates, the designer also went softer with chiffon dresses and a powder pink palette. That tenacious Y2K trend was evident at Central Saint Martins graduate Masha Popova’s first show, which featured oil-slicked, tyre-printed denim, dyed in ominous shades, that’s sure to G up her fan base of celebrities like Bella Hadid and Dua Lipa. Up in Old Finsbury Town Hall, Tessa Vermeulen’s IG-friendly brand Hai (sea in Mandarin), best known for cute silk pochettes, made a case for crinkled silk ready-to-wear.

Since 2017, designers Emma Chopova and Laura Lowena-Irons have bided their time, waiting for the right moment to do a show for their label, Chopova Lowena, which has attracted a cult following for its kilt skirts, upcycled fabric and grunge-tinged bricolage. At their catwalk debut, the time they’ve spent building out their aesthetic and community paid off in a big way. On a streetcast cohort of friends and peers, CL’s collision of Bulgarian folkloric textiles (Chopova was born in Sofia, Bulgaria before moving to New Jersey when she was seven) and schooldays team sports (lacrosse, in this case) brought raucous cheers to the Porchester Hall.

Keralan-born Harri showed his inflated latex creations bouncing on trampolines. A surreal silhouette, with legs morphed into vase-akimbo formations, recalled Bauhaus ballet, but the underlying concept was simpler: Harri distorts gym-body ideals with a dose of wit. Menswear designer Paolo Carzana also reshaped limbs and had organza arms extending from his “textiles monster” which in fact were beautiful when seen in person with their hand-treated fabrics.

Dilara Findikoglu hadn’t shown since before Covid and her comeback was defined by the feeling of being trapped by tradition and religion, stemming from her Turkish background. “I’m 32! This is about my journey that is both spiritual and physical,” she said. Feeling all the weight of those years, Findikoglu found a beautifully dilapidated house in which to show her macabre visual feast: blood red silk, real human hair and sculpted feather tops that had shades of Lee McQueen. The absence of a soundtrack, except for Turkish bells on a shoe or the drag of a Victorian mourning dress, amplified the mood.

Paria Farzaneh was equally contemplative. Her collection, shown in a hidden community garden in the West End, was dedicated to the nomadic tribes of Iran, her homeland, from which she draws significant inspiration.

There was no shortage of buzz around S.S. Daley, who won the LVMH Prize this year. His show didn’t waver from his personal fascination with the British upper crust and the Queen’s passing sharpened those ideas. “I grapple with ideas of the aristocracy and monarchy in regards to class, so it’s been an interesting week.” As a mark of respect, Daley opened his show with a mourning passage, which gave way to a sapphic love tryst between Vita Sackville West and Violet Trefusis, which played out in a theatrical reading of their letters. Whilst shedding light on British queer culture of yesteryear, Daley turned out highlights like a dramatic trenchcoat printed with an illustrated rabbit (a leitmotif of Sackville-West) as well as garments rendered from defly upcycled tea towels featuring Royal Family commemoration dates.

At Molly Goddard, all facets of her now-established aesthetic were presented in four chapters. “I wanted each of them to have their own space.” Cotton tent T-shirt dresses worn over toile de jouy jeans and cowboy boots made a strong case for Goddard’s insouciant casual frills. But her party dresses were the neon cherry on the cake: a passage of brightly-hued tulle creations, ballooned out with contrasting knitwear and striped underwear. The final dress, rendered in white, seemed to have a life of its own with its undulating ruffles.

If you want hard evidence that national mourning does not put an end to life, look to Saturday night in the heart of Soho, where Jonathan Anderson staged his London Fashion Week comeback. With a show set against banks of twinkling slot machines in a well-loved Soho arcade (where this writer misspent much of her teenage youth), Anderson probed the surreal impact that technology has on our lives. “Are we falling into the screen or becoming our phones?” he mused. His ponderings informed the conceptual nature of the clothes, ranging from Pachinko ball metal dresses to stock image beach-and-sunset prints to upcycled silk h dresses with sequined globes and giant care labels. But his bumper bag was on almost every arm and that translates into cash that’s very real.

Anderson ended his show with a satin black mini printed with the simple tribute to the Queen seen all over London: “Her Majesty The Queen 1926-2022 Thank you.” And yet he was firm in his decision to band together with the city’s young designers to keep calm and carry on. “It’s so important for designers to stick together in London and it’s so important that we went ahead. To have gone through the pandemic and now this? It would have been devastating if we had to cancel.” And that’s no royal “we” but a testament to the camaraderie that’s increasingly on show alongside London’s creativity.