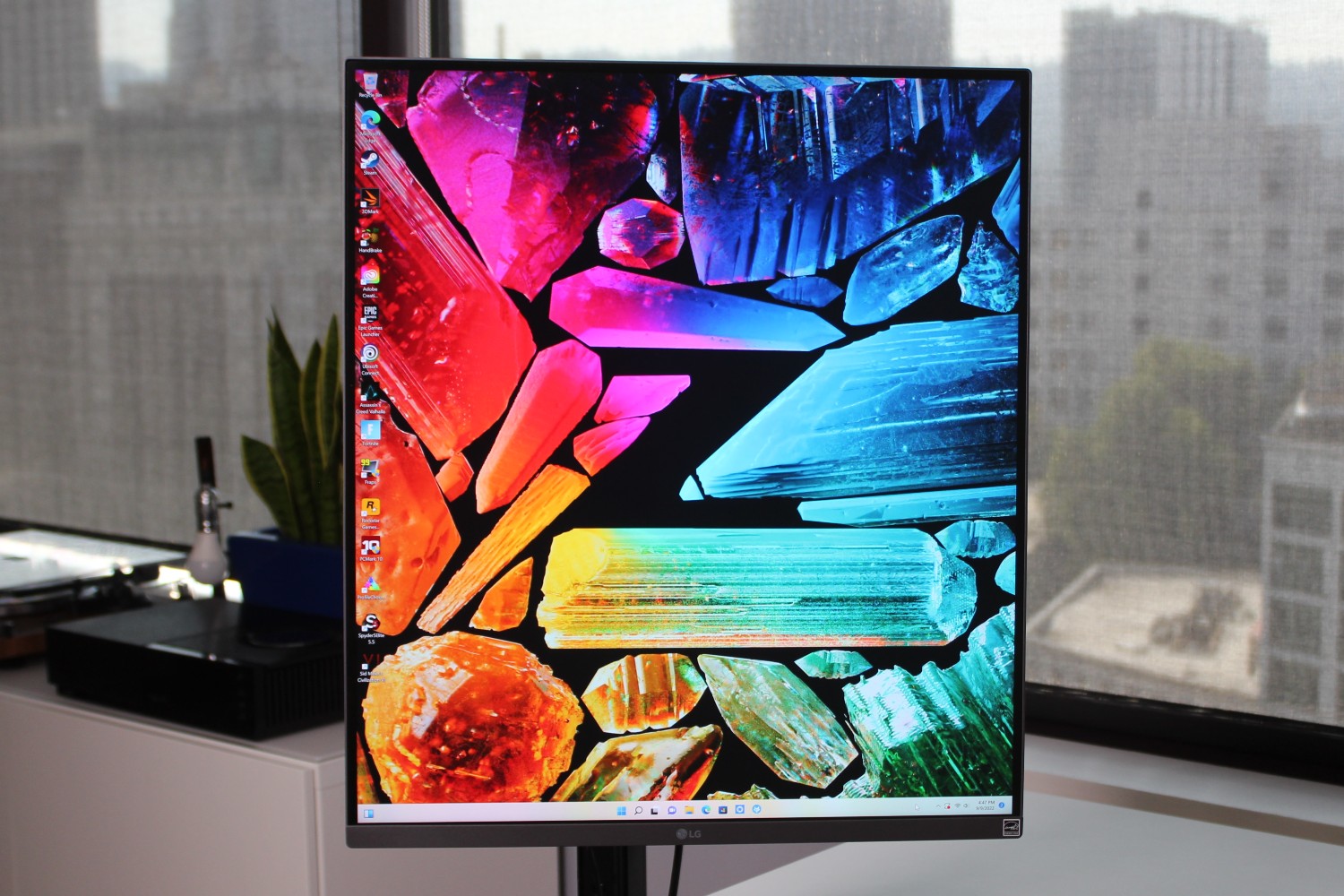 Having a secondary monitor flipped vertically is a solution more and more people are trying out. That’s the exact setup the LG DualUp thrives in, despite being a monitor unlike any other that exists.

Its odd, 16:18 aspect ratio makes it a surprisingly effective secondary monitor. It’s not a display without some eccentricities though, making it more of a luxury item than something most monitor buyers should consider. But for the right person, this is probably the monitor they’ve always wished existed.

Not quite a square

No one wants to use a vertical screen while writing emails or running spreadsheets. But the desire to move more of our computing time to vertical makes some amount of sense. Whether its YouTube Shorts or TikTok, more and more of our content is being made specifically for vertical screens, and it’s awkward to both watch and create on a traditional 16:9 monitor.

That was my first thought when I began setting up the LG DualUp. The monitor doesn’t actually come with a traditional stand at all, but instead features an arm desk mount, which LG calls the “ergo+ stand.” Like with most arm desk mounts, you should plan on needing some extra time to set it up properly.

Without a proper stand, that also means if you’re centering it on your desk, you’ll need to connect . The single click VESA mount on the back of the display is simple enough, but positioning the clamp and grommet in a place that makes sense with your desk takes some effort. Fortunately, the LG DualUp is extremely lightweight, so handling it for the setup isn’t too bad.

But the ergo+ stand comes with lots of benefits, of course. And that’s important when using the LG DualUp as a second screen — especially because of its unique shape.

The LG DualUp isn’t “vertical” in an extreme way. The 27.6-inch screen (measured diagonally) is closer to a square than it is true vertical, which makes it useful in a few different scenarios. Having a 16:18 aspect ratio means it is slightly taller than it is wide, but it’s not as extreme as flipping a 16:9 vertical.

So, what’s the reason for 16:18? Well, it’s the equivalent of having two 21.5-inch displays stacked on top of each other. That means you stack two windows vertically without having to shrink them down.

Think of it as the opposite of an ultrawide monitor, bringing the benefit of multiple monitors in a single package. In that way, it’s ideal for multitasking, just not in the side-by-side way you might be used to.

I found it particularly useful for having a 16:9 video above and a website or Word doc opened below. It’s also a great space to have a feed or chat app open like Slack or Twitter. If you’re even considering this monitor, you can probably quickly brainstorm a few scenarios where this aspect ratio might be handy. I know video and audio production pros would probably love the additional vertical space.

Unfortunately, Windows 11 doesn’t always play nice with the form factor. Snap Layouts tends to handle different screen sizes and resolutions with grace, but a dual top and bottom setup isn’t one of the options. So, if you want to stack windows, you’ll have to do it manually.

Beyond the form factor, the LG DualUp is a quality monitor in terms of visuals. It’s a Nano IPS panel, meaning it still uses traditional backlighting, but with a layer of LG’s nano particles applied on top. This layer is what gives this monitor superior image quality for your standard IPS display.

The enhanced colors are the most obvious benefit. Hitting 89% of AdobeRGB is solid for color saturation, while the Delta-E is at just 0.77. That’s some fantastic color calibration for a display that isn’t specifically aimed at content creators.

Contrast is this display’s biggest weakness.

In terms of resolution, the DualUp sits in-between a conventional 27-inch 1440p and 4K monitor with a pixel density of 139 ppi (pixels per inch). It’s plenty crisp, even sitting up close. I measured the display’s max brightness at 330 nits, which is higher even than LG’s own claim of 300 nits.

Contrast is this display’s biggest weakness. It measured at just 730:1, which is a result of the poor black levels. As a result, text doesn’t pop as much I wished, and watching dimly lit movies or shows isn’t a great experience. The display also has a fairly strong antireflective coating. That makes it great for deflecting glare, but heightens the slightly washed-out look. But hey, LG never claimed this was a multimedia machine.

All the ports of the LG DualUp are located on back, and the selection is fantastic. The 90 watts of power delivery in the USB-C port, in particular, provides one-cable connection with just about any laptop you can imagine.

Meanwhile, the on-screen menus are controlled by a single joystick located in the center of the display’s underside. There, you’ll find the standard assortment of customization, such as different color modes, brightness control, and volume control.

Speaking of volume, the LG DualUp does feature a pair of speakers, but they are extremely mediocre. For anything more than dinging you for notifications, you’ll want to connect to headphones or external speakers.

Should you buy it?

As a primary monitor, I don’t know that the LG DualUp makes a lot of sense. There are some specific use cases that could take advantage of the unique shape, such as a video editor who can use the top half for a timeline. But the LG DualUp works best as a secondary monitor, which is why it doesn’t even come up with a traditional stand.

At $700, though, you’re paying quite a premium for the novelty of this screen. You can buy a solid 4K monitor that can rotate vertically for around $500, and even though I prefer the LG DualUp’s aspect ratio, it’s just a bit too expensive to justify for most people. Still, there’s a lot to like about the LG DualUp, and as a proof of concept, I’m sold.

‘This is the size of the figure Roger Federer represents’, says legend