The Rings of Power: What is Mithril? 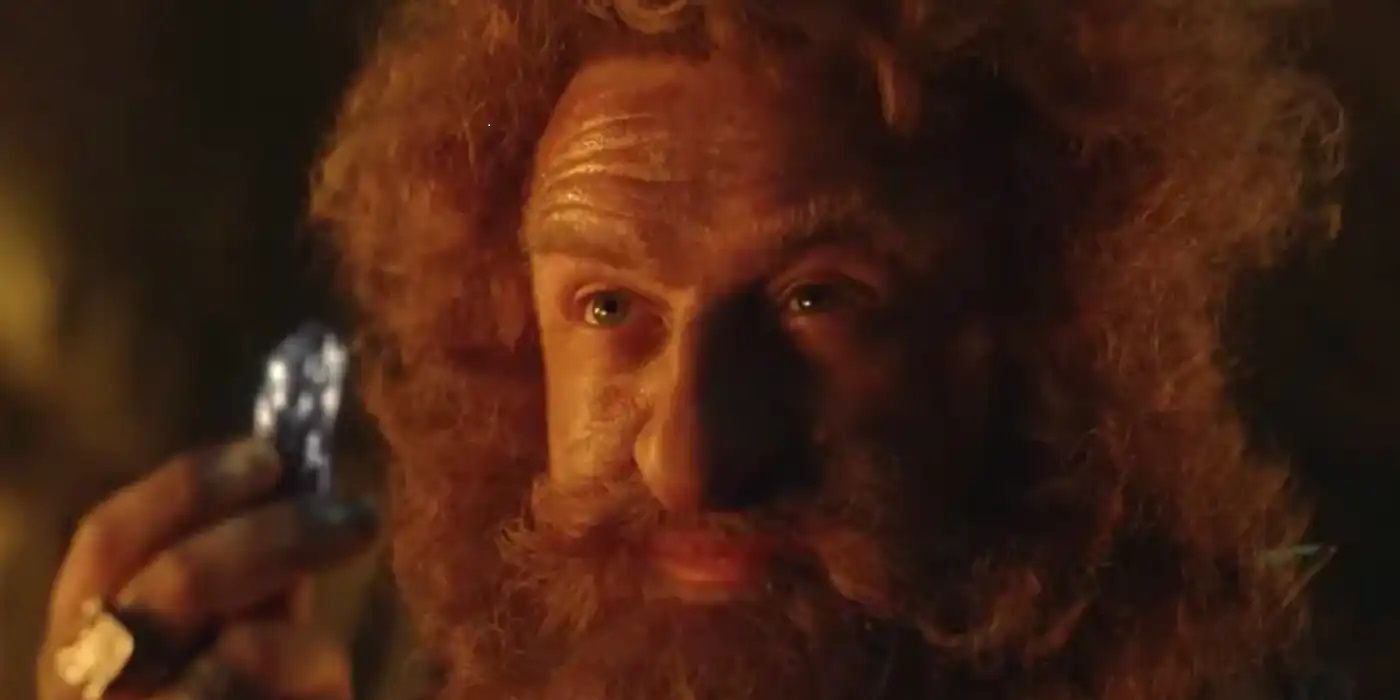 Since his introduction in The Rings of Power, Prince Durin IV (Owain Arthur) has been hiding something, and Episode 4, “The Great Wave,” finally revealed the truth. Prince Durin has been secretly mining mithril from the depths of Khazad-dûm. The idea of mining a mineral isn't groundbreaking, but mithril has a significant history in Middle-earth. A history that is just beginning in The Rings of Power series and will have a heavy impact on the future of Middle-earth.

In the episode, Elrond (Robert Aramayo) learns that Durin is sneaking off to an old mining tunnel. Elrond follows his friend to the tunnel, forcing Durin to explain. He is mining a unique substance, but the process is dangerous. As such, the king has put restrictions on the work. When Elrond asks what it is, Durin calls it “gray glitter.” Though the substance has no name in the Elvish language, Sindarin, Durin approximates it to be “mith-raud.” Elrond corrects him, translating his term with the word “mith” for gray and “ril” as glitter, putting them together to make mithril, a name more familiar to Tolkien fans.

Related: How Accurate Is ‘The Rings of Power' From a Tolkien Book Fan Perspective?

Durin gives Elrond a shard of mithril as a token of friendship. As Elrond and Durin are discussing the substance, the mine caves in, trapping four Dwarves. Although they manage to save all four without any fatalities, Durin's father decides to shut down the mining operation, much to Durin's anger. It seems unlikely that Durin will let it rest forever, especially given the lore explained in The Lord of the Rings.

Mithril is a precious metal known to be both lightweight and strong. It's worth 10 times its weight in gold and does not tarnish. As mithril can only be found in a handful of locations, it is in high demand with all the people of Middle-earth. Khazad-dûm, more widely known as Moria, is one of the few locations, along with Númenor. Due to its rarity, the single mithril-vein in Moria made the Dwarves exceedingly wealthy.

Though most commonly referred to by its Elven name, the metal was called many things. Men used the term Moria-silver or true-silver. And the Dwarves are said to have a secret name for it.

Middle-earth saw mithril as a sign of wealth and power. The guards of Citadel in Minas Tirith wore mithril helmets that lasted for generations as a remnant of their former glory. Additionally, one of the Elven rings of power was forged from mithril — the ring was given to Galadriel and will likely appear later in the series.

Mithril can also be found in the Doors of Durin in the form of an alloy called ithildin. The doors were made by cooperation between the Elven craftsman, Celebrimbor (Charles Edwards) and the dwarf, Narvi. They guard Moria against foes with the riddle “speak, friend, and enter.” In The Fellowship of the RingFrodo and his companions encounter these doors on their journey. The door stumps them briefly, but Merry Brandybuck asks Gandalf the word for friend. When Gandalf answers, “Mellon,” the doors swing open and allow the group to enter.

Sauron supposedly craved the metal, and much of the mithril mined from Moria was collected by Orcs, who gave it to him as a tribute. By the time Bilbo and his friends went on their adventure, the only way to get mithril was to inherit it or to melt down something else to reforge it. Thorin Oakenshield gifted Bilbo a small mail shirt made of mithril from the recovered treasure as a reward for his help against the dragon Smaug. The armor was forged for a young Elven prince before becoming part of the dragon's hoard. Bilbo wore it during the Battle of the Five Armies. The same mithril armor saved Frodo's life in the mines of Moria when it deflected an otherwise lethal stab from the cave troll.

The Fate of Moria

By the Third Age, Moria was the only remaining place where mithril could be found. The Dwarves grew greedy, and as the mithril in their mines was exhausted, they dug deeper. But they went too far. They disturbed a Balrog, a powerful fire demon. This Balrog became known as Durin's Bane after it killed the Dwarven king and sent the rest of Khazad-dûm's citizens fleeing. The mines were abandoned, and that is why the place was renamed Moria, which means “Black Pit.”

Moria became the home of Orcs, but even they avoided the depths where the Balrog stayed. Eventually, the Dwarves attempted to reclaim their ancestral home. This conflict was known as the War of the Dwarves and Orcs. Though the Dwarves won, they suffered heavy losses, and in the end, couldn't stay in Khazad-dûm because of the Balrog.

Some years after his adventure with Bilbo Baggins, Balin decided to resettle Khazad-dûm. His colony was successful in taking back the Eastern halls. They lasted for five years before the Orcs slaughtered them. Dwarves outside of Moria didn't know of the loss, only that they lost contact with Balin.

When the Fellowship traveled through perilous conditions on the mountain outside of Moria, Gimli suggested a shortcut through the mines, as he believed his cousin Balin to be in control of Moria. But the company arrived and found Balin and his colony dead. They ventured further and realized Orcs had infested Moria once again. The Fellowship fought their way through Moria, but the battle angered the Balrog. Gandalf tried to lead them away, and the Balrog pursued them. Gandalf faced the Balrog, destroying a bridge and letting it fall back to the depths. But the Balrog pulled Gandalf with it. With Gandalf's sacrifice, the Fellowship was able to escape Moria. Gandalf fell with the Balrog until they landed on the peak of Celebdil. There, wizard and demon fought for two days and two nights before Gandalf defeated the Balrog.

After the destruction of the ring and well into the Fourth Age, a descendent of the House of Durin finally succeeded in reclaiming Moria. With the Balrog dead, Dwarves were able to return to their long-abandoned home once more.

What Does That Mean For ‘Rings of Power'?

While the destruction of Moria would be thrilling, these events are meant to happen hundreds of years later. Though it is true that the series has already condensed the timeline, the fall of Moria would bring the story well into the Third Age of Middle Earth, while The Rings of Power is set primarily in the middle of the Second Age. If adhering strictly to Tolkien's text, the Balrog is awoken during the time of Durin IV's grandson. The series already has a lot of action to cover without expanding that far into Middle Earth's future. Although the destruction would mirror the Númenor plot beautifully, it seems unlikely The Rings of Power will get to the end of this particular story. However, more than likely, the show will depict Durin getting rich off mithril and perhaps hint at Khazad-dûm's future.