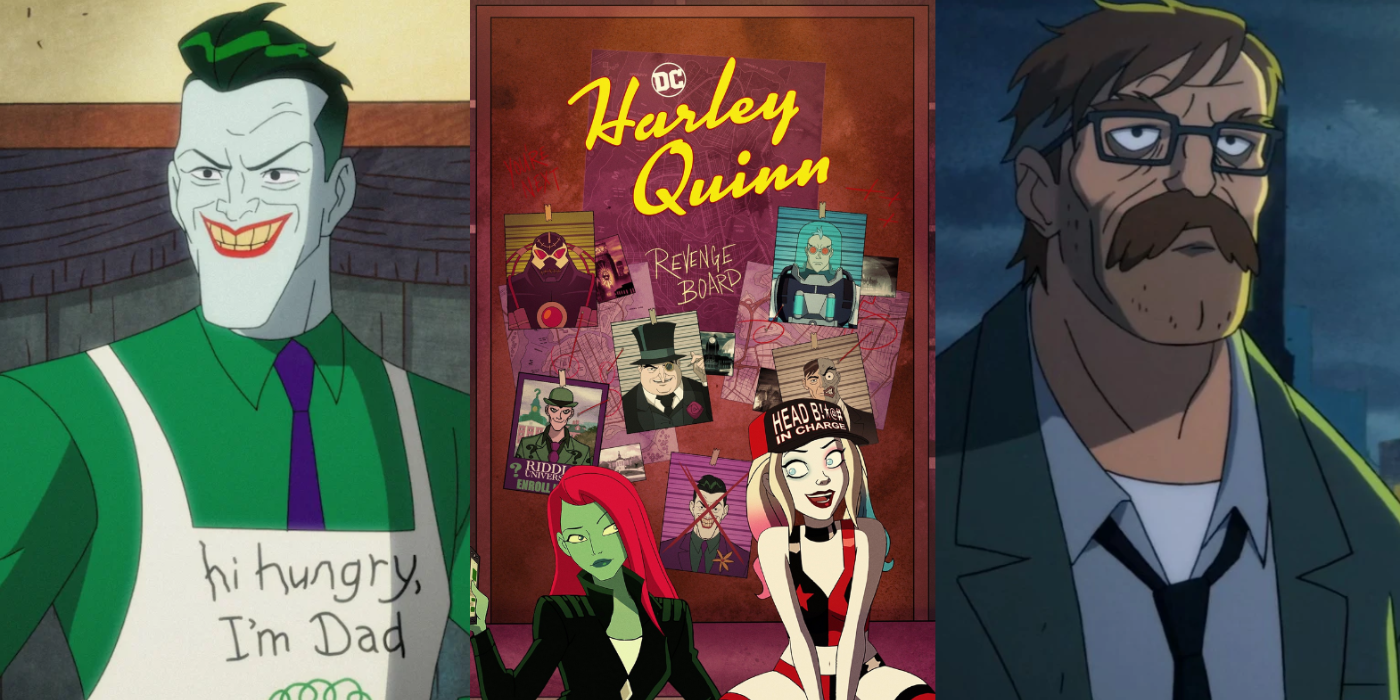 Harley Quinn’s third season just came to its thrilling conclusion, and fans loved it. With the confirmed renewal for a fourth season, show fans can rest easily among the sea of HBO’s recent cancelations. Part of the show’s success is thanks to its deep understanding of Batman stories.

Harley Quinn isn’t just a raunchy comedy that pokes fun at the Batman mythos with shallow references. All of its jokes and characterizations are firmly based on fundamental traits that these characters consistently have. The show simply twists it for a fantastic comedic effect.

10 Commissioner Gordon At His Lowest

Commissioner Gordon is usually portrayed as the level-headed and highly competent police chief of the Gotham City Police Department. His staunch belief in justice and doing the right thing makes him one of Batman’s staunchest allies. In Harley Quinnnot so much. Here, he is very much unhappy, particularly hitting rock bottom in season 2.

RELATED: Every Live-Action Version of Jim Gordon in Movies and TV, Ranked

This characterization isn’t actually inaccurate. Many times in the comics, Gordon has lost hope or didn’t do his job as well as he could. This is particularly present in Batman: Year One. Understandably, the show tackles what Gordon would most likely be like having to face the horrors of Gotham every day. Despite it all, Gordon does still remain a good man at heart, just incredibly jaded and bitter.

Dick Grayson eventually left Batman’s side because they constantly butted heads over how to do each other’s jobs. Now an adult, he felt that he could no longer stand being in Batman’s shadow. Dick Grayson quickly became a sort of mirror to Batman by becoming Nightwing. In the comics, he was a happy-go-lucky guy with great social skills and was generally seen as a cool older brother type.

In contrast, Nightwing in the series is a hilarious parody of the CW Titans' interpretation of the character. Overly edgy and belligerent, he seems lost without Batman’s direction. So, he overcompensates by mimicking what he thinks Batman is like. It’s a fun way to parody the character. Thankfully, the show keeps his surprisingly toned rear, a running gag from the comics, much to Harley’s delight.

Damian Wayne was in the running for the most annoying Robin in a long while. After the beloved Tim Drake left the mantle, Batman was in need of a new sidekick. It came in the form of a biological son, Damian Wayne. He was an abrasive, socially inept, and violent little scamp, and fans were split on what to think of him. The show keeps him a brat but does change a few things.

For one, this Damian is a lot more well-adjusted. Although he remains a bratty child with a chip on his shoulder, he also acts more like a normal kid his age. He plays video games, appeals to adults with his cuteness, and is generally just a more likable person. It’s a fun way to appease those who aren't a fan of Damien while not ruining the character in the eyes of Damien fans. It’s hilarious that the best way to parody Damien is by making him less abrasive.

King Shark is portrayed in most media as a city-busting bruiser, who could handle whole superhero teams with relative ease. He was typically not given much dialogue, because when the writers are given a big shark guy, they tend to make him do big shark guy things. In recent years though, the character has been given a much funnier edge.

RELATED: 10 King Shark Comic Stories To Read Before The Movie

Harley Quinn is no different, and this version is by far the most different. They completely change his personality by making him an adorably quirky computer nerd with a disarmingly dorky voice. Hilariously, his role as the big shark guy is still kept. He could be talking about Beyoncé one minute and then eat people’s faces in the next scene. The juxtaposition makes it both shocking and hilarious for audiences.

6 Joker Is Good (For Real This Time)

Joker is Batman’s most iconic and hated enemy. Joker’s core character trait has always been his psychopathic insanity. The show is no different, at least during the first season. He was basically just a more vulgar and snarky version of the Joker. Starting with Season 2, however, the show starts Joker on an unexpected redemption arc.

The “reformed Joker” storyline is nothing new. The entirety of White Knight is a serious take on this. The show version takes a more comedic approach by keeping the Joker a huge jerk, and still relatively insane. Only this time, he also happens to be a doting family man and eventually, a great mayor. Funny enough, nobody actually forgives him, it’s just that the Joker is such a wildcard that they would rather let him stick around doing good things because it’s way less of a hassle.

Bane is arguably among the most serious of Batman’s rivals. In most media, Bane is taken with deadly seriousness. He’s a threat because of his incredible strength and surprisingly intelligent mind. Bane has broken the Bat, yet at times, helped him heal. He’s a fan favorite for all these reasons. The show subverts this by making him the butt monkey of the show.

With a hilarious parody of the Tom Hardy voice, this Bane is a lovable goof who can’t catch a break. He’s surprisingly wholesome, despite his constant threats of blowing up things he doesn’t like. Bane even turned “the darkness that molded him” into a rehabilitation center. The show skillfully inverts Bane’s personality but makes him iconic in an entirely different way.

Poison Ivy is one of Batman’s most iconic female villains. She had two core traits that defined her whole character. First, she was a well-intentioned extremist who valued plant life over everything else. In that part, the show keeps relatively unchanged, as she is portrayed as an extreme environmentalist. Second, she was sultry and seductive and loved to toy with men’s feelings before disposing of them.

That part requires confidence that this show’s Ivy sorely lacks. Instead, Ivy is very reserved and incredibly awkward when it comes to romance. She also wears a decidedly conservative outfit. A long-sleeved leather jacket and pants are a far cry from her leaf toga. Interestingly, the show does slowly build up Ivy to be more comfortable in her own skin. The only difference is her affections are purely dedicated to Harley.

Harley Quinn is at her best in this show, and even she’s not safe from parody. It might seem hard to parody a character who is already so self-deprecating, but they pull it off. Mostly through Harley herself. The show tackles the idea of Harley legitimately reforming. Through complex hallucinations, mind palace visits, or just plain old therapy, Harley constantly cringes at her past self.

They cleverly frame the satire of the character as Harley’s rehabilitation. She knows she was a very flawed person, but as she starts to grow closer with Ivy and her friends, she starts to truly heal. That gives her the ability to take a look at her life and cringe at herself. The cringing is for a good cause, as this Harley is the most well-adjusted she’s ever been.

Batman is considered the most badass of heroes by a majority of DC fans. With no powers (and an absurd amount of money), he fought off dozens of villains, oftentimes by his lonesome. Through it all, he suffered the mental anguish of being Gotham’s guardian. All thanks to that one fateful night, in a random alleyway in Gotham.

The show starts off with a rather typical version of Batman. Stoic to a fault, supremely skilled, and feared by villains. It’s when the show reveals his personal life that it starts to subvert things. His trauma and lack of socializing made him a bit of a manchild. Alfred is amusingly kept accurate to his comic self, always snarky about his master’s childishness. Sadly, Season 3 tackles the darker side of this. It shows Batman’s trauma struggling to cope with everyday life, having panic attacks and commitment issues outside his Batman persona.

Perhaps the most surprising subversion of the Batman mythos here is Gotham itself. While still riddled with supervillains and criminals, it’s honestly the safest it’s ever been. Mayor Joker has proven himself a competent if unorthodox, politician. He taxes the rich and is working hard to provide universal healthcare and education to Gotham citizens.

A direct answer to a common criticism of some Batman media outside the comics, where Batman seemingly never does anything to help Gotham outside of violence. Not only that, but Harley Quinn has also become a legitimate anti-hero. She’s reconnected with her past self, the one who wanted to help people. For a comedy show centered on villains, it ends on a shockingly hopeful note.

NEXT: 20 Of The Best Batman Comic Book Arcs Of All Time