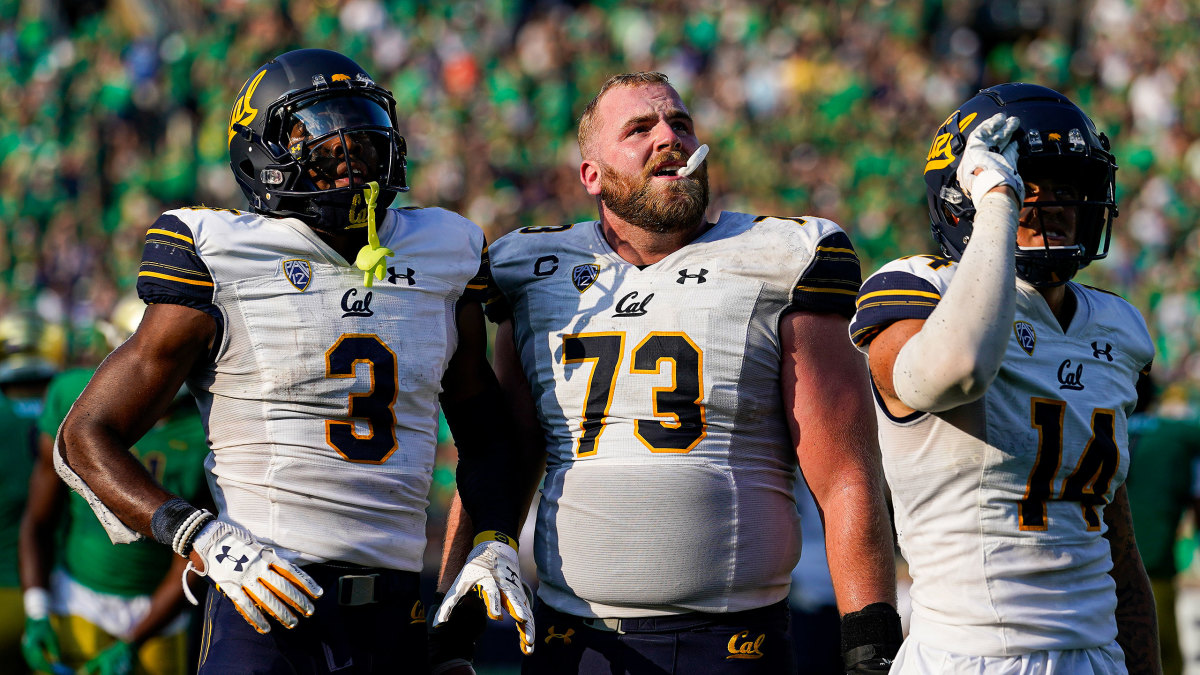 There have been 67 one-score games thus far this season, which seems to be on par with most years. But it does seem like we’ve had an inordinate number of games in which defenses couldn’t hold leads, or the kicking game malfunctioned at crunch time, or penalty flags flew at an inopportune moment, or coaches temporarily took leave of their senses.

In other words, as many close games have been lost as won. And sometimes even the winners are shaken to the core by how hard they tried to lose.

Prime example of the latter: Our Lady (21) on Saturday. Rookie coach Marcus Freeman looked like he was scarcely concealing his suffering as his team’s seven-point lead over California grew more and more imperiled in the final minute. “I keep trying to tell myself to enjoy it,” he said afterward, but there was no immediately enjoying how close the Fighting Irish came to an 0–3 start.

After rallying in the fourth quarter to take a 24–17 lead, the Irish sent out their stout defense to secure the win with 1:03 left. Sure enough, Clarence Lewis intercepted Cal’s first pass of the possession, which would have ended it—but linebacker JD Bertrand, a veteran playing in his 27th college game, inexplicably targeted the Golden Bears receiver on the play, overturning the interception and keeping the game in doubt. Six plays later, Cal got a game-of-inches break when quarterback Jack Plummer was correctly ruled down milliseconds before serving up what would have been a game-ending turnover. That left Cal time for one last play.

Plummer’s Hail Mary into the end zone should have been batted down. Instead, veteran safety Brandon Joseph, playing in his 28th college game, twice tried to catch the ball instead of swatting it to the turf, and twice had it knocked from his hands to keep it in play. After the second carom, the ball landed on the body of Cal receiver Jeremiah Hunter, who nearly made the catch while lying on his back in the end zone.

Bottom line: Even the veteran players are still young enough to do things that are hard to understand with the game on the line.

There is a multitude of other, oh-no-they-didn’t plays that didn’t end quite as well. The pressure on players, coaches and officials in these games is significant, and it can affect performance. A brief Dash compendium of game-losing breakdowns, while wondering whether anyone can finish a game without it dissolving into panic and chaos:

Purdue (22) probably set some kind of record at Syracuse on Saturday in finding a way to blow what would have been a great comeback victory. After taking a four-point lead with 51 seconds left, the Boilermakers received two unsportsmanlike conduct penalties that pushed the ensuing kickoff back to their own 10-yard line. That gave the Orange the ball at midfield after the return. But Purdue was only getting started.

There was a third-and-10 holding call. Then a third-and-10 interference call. Then Garrett Shrader completed his only pass of the drive, a 25-yarder with seven seconds left to a receiver who was somehow single covered and got open deep rather easily against a defense that should have been covering the goal line. After that, there was a Purdue offsides penalty that was declined, and two more personal fouls on the Boilermakers that were accepted.

Seven penalties, six accepted, in the final minute of play. While at least one of the flags was questionable, the responsibility is on Purdue to shut up and play. Which coach Jeff Brohm acknowledged Monday. “The chatter has to stop,” Brohm said. “We just have to be really, really by the book and keep our mouth shut and coach and play football.”

Iowa State (23) did its part to keep rival Iowa and its rickety offense in the game until the final play Sept. 10. The Hawkeyes had a final possession in the final half minute, and the Cyclones contributed an offside and a personal foul to aid Iowa’s drive into field goal range. Iowa missed the kick from 48 yards to end the game, which is part of another subset of late-game calamities.

LSU (24) nearly pulled a rabbit out of its hat against Florida State in the season opener, only to have the tying extra point blocked on the final play. Of course, this followed two muffed punts and a blocked field goal earlier. (The Tigers were on the receiving end of a crucial special teams miscue Saturday against Mississippi State, when the Bulldogs muffed a punt inside their own 10-yard line with a six-point lead.)

South Florida (25) was nine plays into a really nice drive for a potential tying field goal in the final minute against Florida—keeping alive hopes for what certainly would have been the biggest victory of Jeff Scott’s coaching career. Then the center fired a ground-ball snap in shotgun formation, resulting in a 14-yard loss, and USF opted for a conservative run call on third-and-20 that threw the onus onto the shoulders of kicker Spencer Shrader. Still, he had a chance from 49 yards—and the holder dropped the snap. Shrader followed through with the kick and came miraculously close to making it, but the game was lost.

East Carolina (26) had a pair of #CollegeKicker moments late to derail an upset of North Carolina State in the season opener. Owen Daffer hooked the tying extra point wide left with 2:58 left (the holder gave him the laces, a no-no) and then pushed the winning field goal wide right from 41 yards out with five seconds remaining.

South Alabama (27) outsmarted itself badly at UCLA on Saturday, contributing to a lost opportunity for yet another Sun Belt Conference upset this season. With a 31–29 lead and three minutes remaining, the Jaguars lined up for a 39-yard field goal—then shifted out of it into a regular play. Ultimately, nothing was regular about it: coach Kane Wommack put the ball in the hands of holder/third-string QB Tanner McGee, who last threw a pass in 2020; he sent the kicker deep on a pass route; he had a wing blocker and a tackle on the right side of the line who both appeared to be perplexed and completely whiffed as UCLA rushers ran past them. End result: a sack and 11-yard loss that paved the way for the Bruins’ winning field goal.

Wommack told a Mobile radio station Monday that if he had the fourth-and-2 to do over again, he would have gone for it in a more conventional manner—like, with his starting offense on the field. Wommack said standout running back La’Damian Webb had been cramping up, but there were other options beyond the multilevel debacle he went with.

Troy (28) similarly found a way to outthink itself while trying to hang on to a lead on the road late. The Trojans were up 28–24 on Appalachian State when coach Jon Sumrall opted for an intentional safety instead of kicking out of his own end zone. While that brought the Mountaineers within a field goal of victory, more important might have been the decision to squib the ensuing free kick from the Troy 20-yard line. Troy’s average kickoff length on the season before that had been 63 yards, and this one traveled only 46—and it was returned 13 yards on top of that, negating any advantage to the squib. That put App State within prayer range on the ensuing Hail Mary, and we all know how that ended up.

This has been the biggest culprit in blown late-game leads, as teams have seemed to struggle to find the right approach—soft coverage that gives up too much ground underneath, or more aggressive coverage that can surrender deep plays. But, hey, it’s not just a college thing. NFL teams blew several leads Sunday when their defenses couldn’t get off the field.

The defenses staged joint collapses in the fourth quarter of Purdue-Syracuse, and even more so in App State–North Carolina. But those are hardly the only examples.

Florida State (29) giving up 99 yards to a previously hopeless LSU offense on the final drive in the Superdome was certainly something to behold. (That collapse was salvaged by the previously mentioned PAT block.) And teams playing Indiana (30) have conspired to keep the Hoosiers 3–0 with a couple of late defensive flops.

After starting 21 of 42 against the Illinois defense, Connor Bazelak completed seven of his next nine passes to march Indiana inside the 10-yard line and set up the winning touchdown with 23 seconds left. Then Saturday, Western Kentucky reprised Illinois’s role in keeping Indiana undefeated by allowing a 90-yard drive for the tying score in the final minute, including committing four penalties (one was declined).