10 of the Creepiest Haunted Houses in Horror History 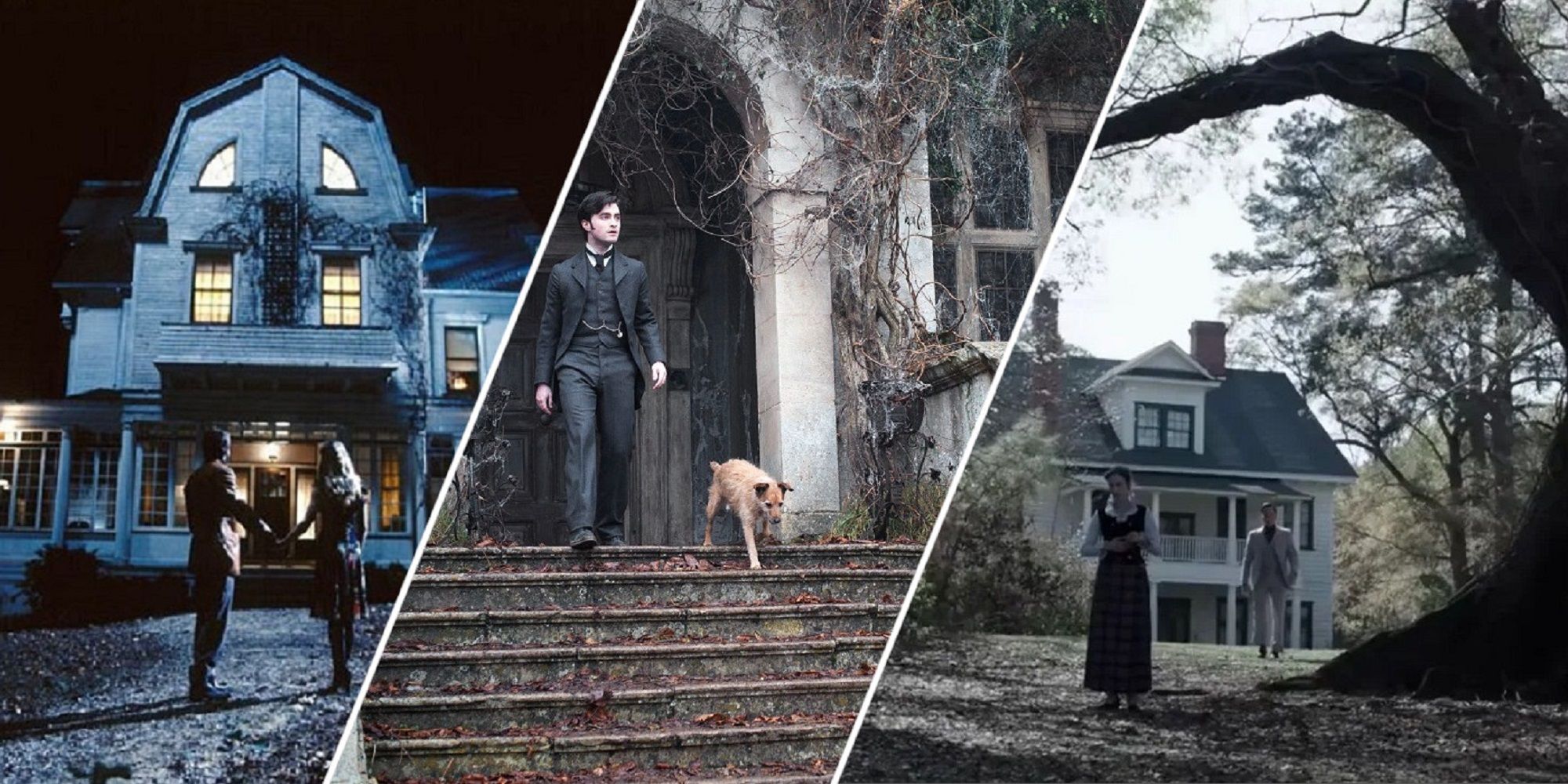 There are many types of horror movies to get you scared during the Halloween season. Whether it's vampires, the paranormal, disturbed dolls, creature features, or slashers, there is a special type of horror out there for everyone. One of the most beloved staples in horror though remains the haunted house.

RELATED: Funny Horror Movies That Will Scare You and Make You Laugh in Equal Measure

Filled with grief, misery, and ghosts, there is nothing more terrifying than a house alive with the unknown. No one has the desire to come home and be taunted by slamming doors and floating silverware. Haunted houses, where strange secrets lurk in dark corners and basements, remain a classic trope for a reason – not being in control of your surroundings is petrifying.

James Wan's The Conjuring helped create an entire cinematic universe of the paranormal. With the introduction of paranormal investigators, Ed and Lorraine Warren, The Conjuring was a milestone in the haunted house horror genre. Its intensely terrifying visuals and basis in reality scared audiences around the globe. And for good reason – the movie's story comes from the real-life séance conducted by the actual Lorraine Warren in the 1970s.

Like most haunted houses in scary movies, the home starts off as a calm and pleasant refuge for a new family moving in. As the house's supernatural presence becomes increasingly hostile to the five daughters, the Warrens help the family discover the house's macabre history.

One of the most terrifying situations portrayed in the haunted house genre is a home that holds you hostage. In another one of James Wan's horror masterpieces, Insidious goes beyond the realm of the usual home hauntings and takes it into the land of the comatose.

In the film, Josh and Renai Lambert take drastic measures to save their son who has fallen comatose in their new home. When it seems that their new house is haunted, they seek help waking up their son, only to discover that he is possessed by a malevolent entity. The film includes an intensely creepy scene when Josh is put into a trance and the spirits of the Further infiltrate their home and terrorize them.

Thir13en Ghosts shines in almost every way. Between its gnarly practical effects, enchanting set designs made of glass, maze-like hallways, and one of the most elaborate puzzle box houses ever created, the spectacular old house is rife with energy. It's difficult not to fall in love with the home itself, even if the story's plot is cheesy at times.

The film follows a family who inherits a bizarre house from their eccentric uncle. There's one huge problem though: the house seems to have its own dangerous agenda. The family becomes trapped inside their new home by strangely shifting walls and vengeful entities that threaten to annihilate them.

RELATED: Horror Movies That Were Near Perfect, According To Metacritic

The legends surrounding the real-life Amityville house at 112 Ocean Avenue are some of the most infamous haunted house stories in the world. The house was home to the grisly DeFeo murders before the Lutz family claimed to endure paranormal terror there when they moved in, which inspired The Amityville Horror.

The Amityville house remains one of the most well-known haunted houses to this day. 1979's chiller follows a family who is terrorized by supernatural forces after moving into a new house in New York, which was the scene of a recent mass killing. The home also belonged to an 18th-century satanist, and the family must call upon a priest to exorcise their home.

Paranormal Activity took the world by storm with its found-footage and low-budget film style that made it seem like a video straight from your family's home movie stash. It kickstarted another round of found-footage craze, much in the same vein as The Blair Witch Project in the 90s, and paved the way for even more experimental movies like Rec and Cloverfield.

While there have been numerous sequels and spin-offs, the first movie in the franchise remains the most terrifying. Soon after moving into a seemingly normal Suburban track home, Katie and Micah become increasingly disturbed by what appears to be a supernatural presence. When they try to capture the entity on film while they sleep at night, they are not prepared for the sinister events that follow.

The Japanese haunted house film, Hausuis every bit as eccentric and bizarre as it is scary. This masterpiece of a movie is celebrated for its absurdness and the childlike inspiration for its scares. As odd as the film is, Hausu digs a lot deeper than most people give it credit for. It deals with the heavy subject matter of grief and loss and often blurs the line between reality and the unknown.

The movie follows a young girl who visits her aunt's home to avoid spending time with her father's new lover. After arriving at the sprawling estate, supernatural events begin to occur immediately. Household appliances come to life, a severed head floats through the air, and a portrait of a cat seems to contain an evil spirit.

By the time that The Others was released, the haunted house genre was full of tales of houses coming to life and being possessed by demonic entities. The 2001 hit became a breath of fresh air when the movie took the opposite approach. Its house was home to a gothic-inspired atmosphere filled with palpable dread instead of cheap scares and special effects.

Set in war-torn 1945, The Others tells the story of devoutly religious, Grace, and her two children, Anne and Nicholas. Grace moves her family into a new house and awaits news of her missing husband while protecting her children from a rare photosensitive disease. Young Anne claims to see a ghost, and chilling events begin to take place.

Ju-on: The Grudge came out at the time that Japan's superb horror was taking over the world. It was released during a wave of Japanese horror movies in the early 2000s that spooked audiences and gave way to American remakes like The Ring and The Grudge. The films' scares were rooted in traditional Japanese folklore, which made their chilling stories all the more real and feared.

The movie is based on the terrifying urban legend of Kayaka woman who was repeatedly stabbed to death by her husband before he drowned their son. It also took on the premise of Japanese haunted houses: if a building has endured a singular horror, it absorbs it and returns it to those who visit. With a petrifying shower scene that Hitchcock would have admired, Ju'on: The Grudge is one Japanese horror film that will make you sleep with the lights on.

The Woman in Black made headlines for being the first movie that Harry Potter's Daniel Radcliffe would star in after finishing the decade-long franchise. Based on the Gothic horror novel by Susan Hillthe film was released to critical acclaim due to its stunning production design, and near-perfect atmosphere.

In the film, Arthur Kipps, a lawyer, is recently widowed and sent to a remote village to put a deceased eccentric's affairs in order. Soon after his arrival, it becomes clear that the village's people are hiding a terrible secret. Arthur discovers that his client's house is haunted by the spirit of a woman who is desperately trying to find something that she lost.

While The Awakening doesn't necessarily take place in a haunted house, it still remains one of the scariest horror movies in the genre. Instead of a home coming to life, a young boys' boarding school is haunted during post-World War I.

The movie is special to the horror genre because of its stunning and dreary atmosphere that fills you with fear and anxiety without resorting to gore or frightening jump scares. The post-war dread is palpable in a setting that is full of haunted doll houses, toys that move on their own, and hands that grab out at you from the water.