How America’s Retirees Are Turbocharging Politics 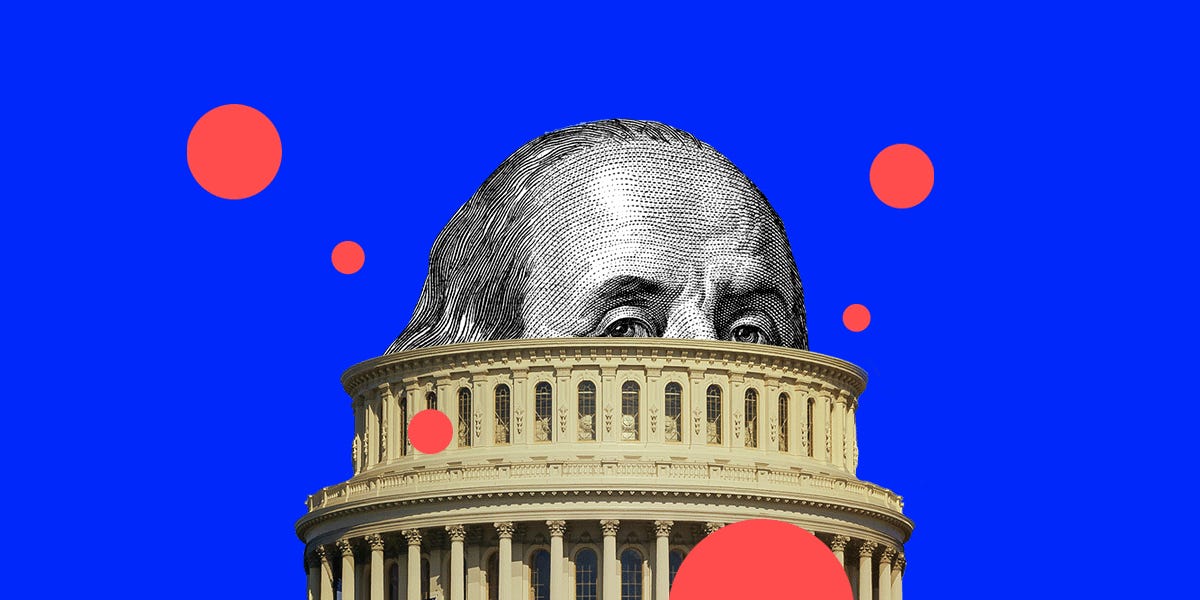 Roy Podorson, 81, of Wilmington, Delaware, was so afraid the United States was “turning into a third-world country” in the 2020 election cycle that he spread more than 450 donations among various Republican PACs and candidates.

Crystal Snow, a 60-year-old retired business owner, also donated hundreds of times to Republican groups ahead of the 2020 election, according to federal records. Snow told Insider she donated according to her Christian values and did so exclusively online, including to the likes of Sens. Tim Scott and Tom Cotton, and Rep. Jeff Van Drew.

Podorson and Snow represent a growing trend in how politicians fund their campaigns.

Retirees are becoming one of the most powerful political financial forces in the nation as they spend their savings to fuel federal-level campaigns, according to an Insider review of congressional campaign contribution data from the 1999-2000 election cycle to the present.

During the 2019-2020 election cycle alone, more than 1 million retired people contributed to congressional campaigns and political committees, according to records compiled by the nonpartisan research organization OpenSecrets.

For years, retirees supplied about $1 in every $10 that federal-level political candidates raised from those contributing more than $200.

Retirees' expanded influence coincides with the rapid increase in politicians fundraising by email and text message — and targeting older Americans with never-ending solicitations.

Contributing money to a politician 15 or 20 years ago usually involved writing and mailing a check or attending an in-person fundraiser. Today, donating to a candidate is as simple as other kinds of online interactions, such as making a one-click purchase from Amazon or placing a bet at an online casino.

During the 2022 midterms, federal candidates have already received $145 million from big-dollar retiree donors.

“If you're looking at the party split, Democrats, as well as Republicans, are benefiting from retiree contributions,” Weber said, calling it a “bipartisan phenomenon.”

Rise of the retirees

To understand this phenomenon, look no further than Republican Rep. Chris Smith of central New Jersey's 4th Congressional District. Retirees have increasingly contributed more and more money to him during the past two decades, according to fundraising data from OpenSecrets.

But by the 2019-2020 cycle, retirees combined to donate more than $124,000, according to OpenSecrets. This doesn't even include small-dollar donations — those of $200 or less — which political candidates aren't required to detail in their public financial disclosures.

Democratic Rep. Diana DeGette of Colorado has had a similar experience collecting contributions from retired folks.

When she ran for Congress in 2000, retirees gave a paltry amount to her war chest. But similar to Smith, retirees have slowly been increasing their financial support for the representative, ultimately donating $38,550 to her 2020 reelection campaign, excluding donations under $200, to become the eighth-largest interest group funding her campaign according to OpenSecrets.

Despite the increase in donations, DeGette's campaign spokesperson, Jennie Peek-Dunstone, told Insider that DeGette hadn't done anything new or different on the campaign trail to court retiree voters. While in office, DeGette “has worked on some high-profile issues that are important to the retiree community,” Peek-Dunstone said.

Insider's “Red, White, and Gray” series explores the costs, benefits, and dangers of life in a democracy helmed by those of advanced age, where issues of profound importance to the nation's youth and future — technology, civil rights, energy, the environment — are largely in the hands of those whose primes have passed.

Older Americans, many of whom are retired, tend to be more engaged politically and represent a larger share of each party's base, said Sheila Krumholz, the executive director at OpenSecrets.

Beyond technical innovations, Krumholz said, one possible explanation for the rise in retiree donations could be because of an increase in divisive politics.

“The heightened level of partisan vitriol in recent years might be higher among the party base and therefore among older Americans,” Krumholz said, “or it could simply be that retired people have the money.”

Krumholz told Insider that people expect to be “catered to” after making contributions and that corporate leaders and PACs often make contributions to “get a foot in the door” with politicians.

“That access is not simply to feel good, but to be able to then convert that to be able to pitch their perspective and ultimately help shape policy,” Krumholz said.

Weber, the senior researcher at OpenSecrets, noted that in addition to an increase in political engagement and interest from retirees, campaigns may have simply “gotten more efficient at tapping that potential source and getting into contact with it.”

What would have been virtually impossible not long ago — scoring a contribution directly from a phone in someone's pocket — has become standard operating procedure for many candidates and committees.

But congressional and presidential campaigns have faced scrutiny for using deceptive techniques to fundraise, such as too-good-to-be-true “matching” promises and the practice of pre-checking boxes to opt donors by default into making monthly, recurring contributions.

The automatic box-checking, which Trump's campaign and PACs have regularly used, has drawn the ire of several Democratic representatives, who introduced legislation that would ban the fundraising strategy.

“Political campaigns are about persuading voters on your values and ideas, not scamming people out of every last dollar they have,” said Rep. Mike Levin of California, one of three representatives who introduced the Uncheck the Box Act. “Unfortunately, many Americans have unwittingly paid thousands of dollars to campaigns through the deceptive practice of automatic recurring contributions.”

“Politicians are always courting the votes of seniors then, behind their backs, they're scamming them for money,” Klobuchar said.

Many deceived donors have requested refunds. An analysis from the Times focusing on California found that older people tended to refund their donations to Republicans and Democrats at much higher rates than younger people.

The analysis found that those who were 70 years old and above were refunded four times as much money compared with those ages 50 and younger. This showcases that senior donors — which certainly includes many retirees — may feel less satisfied or tricked more often by the group they donated to in comparison with their younger counterparts.

As for Podorson, the 81-year-old frequent GOP contributor, he told Insider he'd grown tired of receiving so many emails from campaigns asking for money — more than 20 a day by his count. He's cut back on political spending this election cycle, having donated only 13 times to groups including Trump's Make America Great Again PAC and the campaigns of Sen. Lindsey Graham and Rep. Jim Jordan.

“Donations have gotten me so many emails, so I'm not interested in doing that at this point in time,” he said.

Snow has taken similar measures as Podorson this cycle, she said, donating much less than before because, in an allusion to the economy, “times are tighter.”