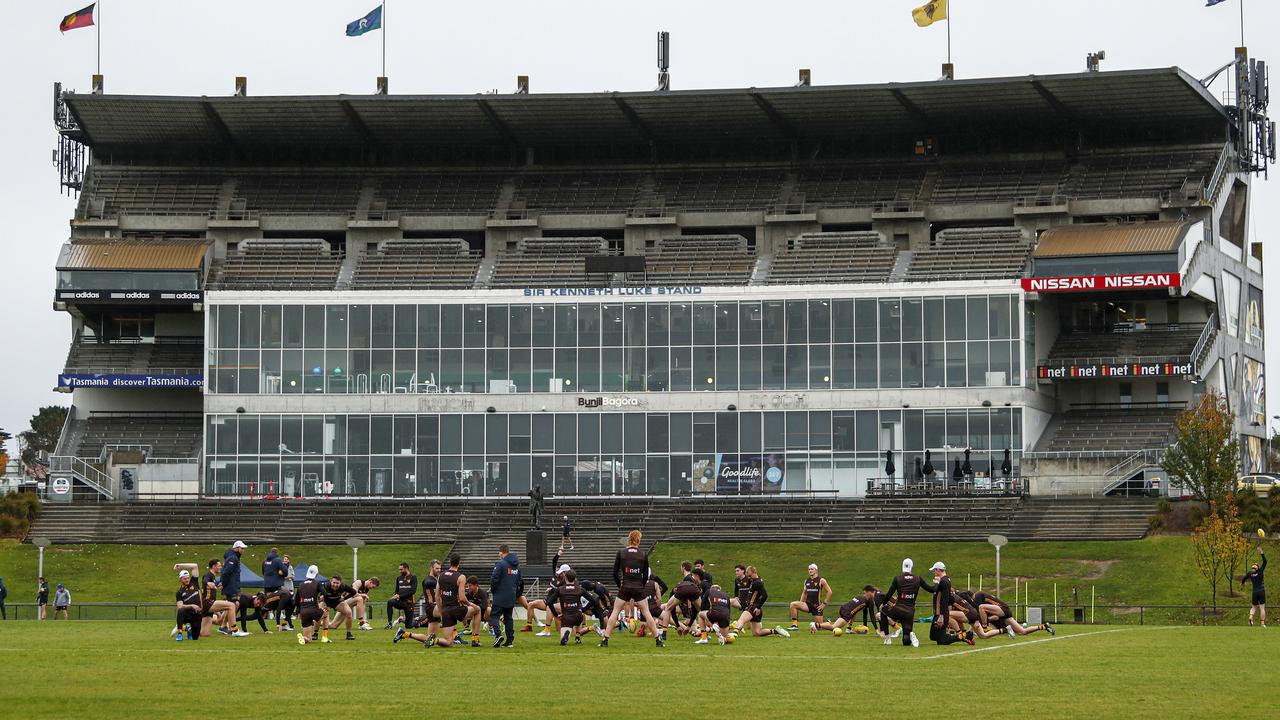 A Hawthorn-commissioned review document has revealed troubling and concerning accusations about the club’s past treatment of First Nations players during the era in which Alastair Clarkson was coach.

ABC Sport on Wednesday morning published an extensive piece detailing the confronting contents of an external review that’d been commissioned by Hawthorn, as well as first-hand accounts from three First Nations players spoken to by ABC journalist Russell Jackson. The report was handed to senior Hawks management two weeks ago and now in the hands of the AFL Integrity Unit.

Jackson’s article, which can be read in full here, reveals details that allege key Hawks figures at the time:

— Urged one player to instruct his partner to terminate a pregnancy

The report also alleged some of the club staff involved were Clarkson — the recently-appointed North Melbourne coach that guided Hawthorn to four premierships — and Chris Fagan — the former Hawthorn football operations boss that has been the Brisbane Lions’ head coach since late 2016.

One player, whose name had been changed to ‘Ian’ in the ABC Sport article to remain anonymous, alleged he was ushered into an office with coaches, including Clarkson and Fagan, after he’d told teammates his partner was pregnant. Ian said he was encouraged to have the pregnancy terminated, leave his partner and move in with a Hawks assistant coach.

“It was so intimidating, confusing and upsetting,” Ian said.

“Clarkson just leaned over me and demanded that I needed to get rid of my unborn child and my partner. I was then manipulated and convinced to remove my SIM card from my phone, so there was no further contact between my family and me. They told me I’d be living with one of the other coaches from that night onwards.”

Ian’s partner told ABC Sport about how difficult it was to then communicate with him. ‘Amy’ alleged then-Hawthorn development manager Jason Burt and another Hawthorn staffer met with her in a cafe — Ian was not present — and was told of the club’s stance on the relationship.

The couple would have the baby then fell pregnant six months later. But due to Ian’s anxiety around how the club might react, Amy had the pregnancy terminated.

“To this day, I haven‘t been able to completely forgive myself. I often wonder what life would have been like if I had just listened to my mother or followed through with walking out of the hospital that day. It’s a decision I have made in my life that I will always regret.”

“This is a sacred thing, the bond between a mother and a child, and Hawthorn wiped their feet all over that.

“Hawthorn says it‘s the family club. Yet they tore ours apart.”

Another player, ‘Zac’ was pulled into a meeting with Clarkson, Fagan and Burt and told his relationship with his partner, ‘Kylie’ — who was seven weeks pregnant at the time — was holding him back from reaching his potential as an AFL player and for him to progress, the relationship needed to end. Zac then moved out and was urged by the Hawks to change his phone number. Kylie received no updates from the Hawks about Zac’s welfare, despite her persistence in reaching out.

Kylie had a miscarriage, but Zac only found that out via Burt.

“Jason Burt came up to me at training and just mentioned it in a ‘by the way’ kind of comment. He said ’mate, Kylie had a miscarriage but don’t worry, she’s fine and has good support’,” Zac said.

A third couple interviewed by ABC Sport detailed how the player, ‘Liam’ had been asked by the Hawks to distance himself from his mother, partner and young child after they had visited Melbourne and wanted to stay.

Clarkson, Fagan and Burt hadn’t responded to the ABC prior to publication.

In a statement on Wednesday morning, Hawthorn said the investigation had uncovered “disturbing historical allegations”.

“Earlier this year the Hawthorn Football Club engaged external First Nations consultants to liaise with current and former First Nations players and staff to learn more about their experience at the club,” the club’s statement read.

“This important work has raised disturbing historical allegations that require further investigation. Upon learning of these allegations, the club immediately engaged AFL Integrity as is appropriate.

“The club will continue to provide support to those who have participated in this process, and their wellbeing remains our priority.

“While the process indicated the current environment at the club is culturally safe, it also recommended that some of the club‘s current First Nations training and development programs should continue to be strengthened.

“The club places the best interests and welfare of our players and staff as our number one priority.

“Given the matters raised are confidential, the club will not provide any further comment at this time.”

The AFL confirmed to ABC Sport its Integrity Unit was investigating the document it received from Hawthorn, which outlined “very serious allegations”. It said the experiences outlined in the document were “extremely serious and require further and full examination”.

“The AFL is committed to providing a safe, welcoming and culturally appropriate environment for all players and staff throughout the industry, ensuring that physical, mental and emotional welfare is a key priority for all in our sport,” a league statement read.

“The AFL takes extremely seriously all matters where people report experiencing harm, discrimination or mistreatment in our industry.

“The experiences outlined in the document are extremely serious and require further and full examination.

“The AFL is finalising a process to investigate the allegations and has sought further details of those who shared their experiences in order to progress its investigation.

“The AFL is committed to ensuring all who shared their experiences are fully supported through this process. The AFL will liaise with the parties to ensure appropriate support and cultural safety are in place in accordance with the wishes of those involved.”

For further information about depression, contact beyondblue on 1300 22 4636 or talk to your GP, local health professional or someone you trust.

For pregnancy and infant loss support, contact Bears of Hope or Sands