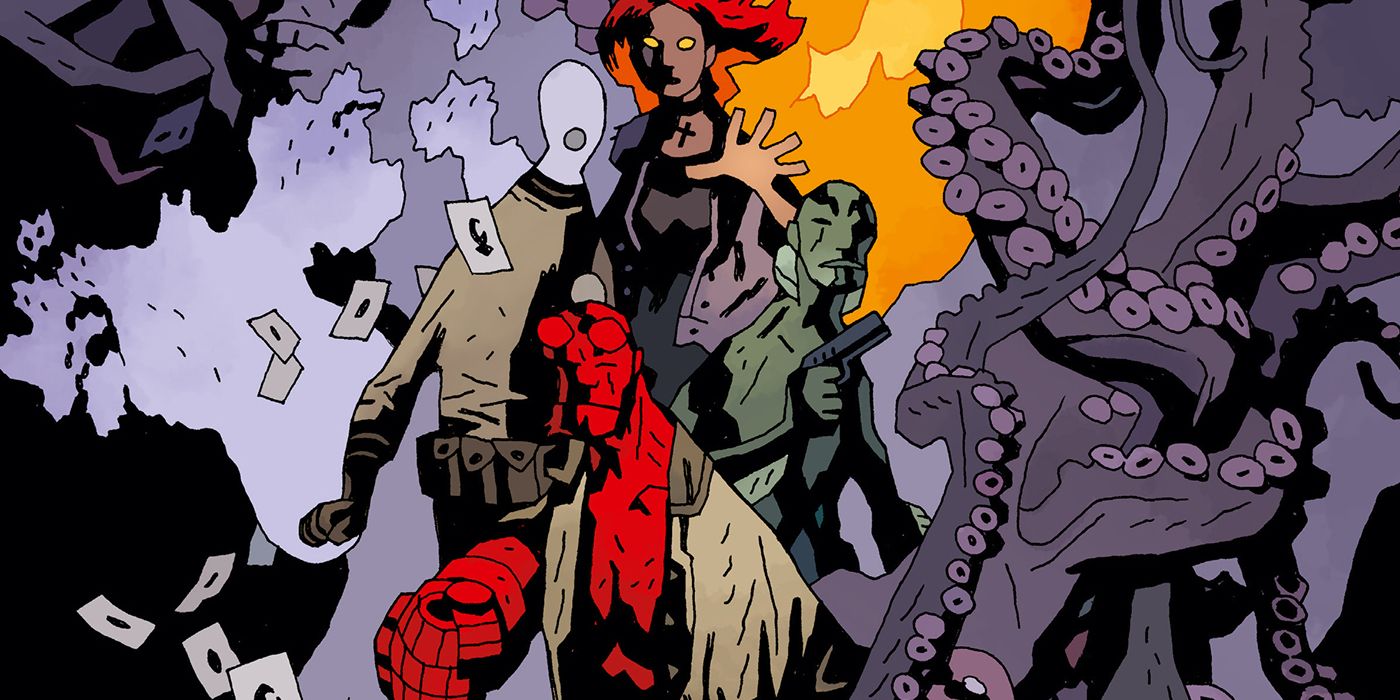 The Hellboy mythos is one of the richest the comics medium has ever seen, but it's been woefully underused in video games and that needs to change. Apart from a guest appearance in NetherRealm's Injustice 2 as a DLC character, Hellboy doesn't have many prominent gaming roles to his name, with his last solo adventure being 2008's Hellboy: Science of Evil – a tie-in for Guillermo del Toro's 2008 film, Hellboy: The Golden Army. Unlike del Toro's films, however, Science of Evil didn't do the character justice, and with Embracer Group acquiring Dark Horse earlier in 2022, it's high time that a new Hellboy game was made – one that does justice to Mike Mignola's vision.

Created in 1993 by Mignola, Hellboy is a gothic superhero who takes after his pulp idols from the Second World War – Lobster Johnson in particular. Arriving on Earth to seal its doom but being raised in secret by a warmhearted professor and his not-so-sentimental organization, the B.P.R.D., Hellboy becomes an agent fighting all kinds of supernatural threats – including the remnants of the Third Reich. He is joined by other notable characters, including the amphibious fish-man Abe Sapien, the pyrokinetic Liz Sherman, and the ghostly German scientist Johann Kraus. Hellboy eventually leaves the Bureau in 2000, after which he embarks on his own journey of self-reflection, eventually culminating in an epic battle for the throne of England (followed by an unfortunate trip to Hell).

DC and Marvel fans are spoiled for choice when it comes to video games. New Bat Family game Gotham Knights releases in October, while next year will see the launch of Marvel's Spider-Man 2 and Suicide Squad: Kill the Justice Leaguewith other titles like Marvel's Wolverine and Wonder Woman also in development. In the meantime, the Hellboy mythos constructed by Mignola and his collaborators in comics like Hellboy, B.P.R.D.and Abe Sapien continues to be ignored by the gaming medium. This seems likely to change now that Embracer has acquired Dark Horse (which had itself established a video game division in 2021), but the lack of any new announcements underlines just how long Hellboy has gone unappreciated in this space. In short, Hellboy deserves the opportunity to show gaming what he's made of, particularly in light of the gothic successes of games like FromSoftware's Bloodborne and Elden Ring.

Like the DC and Marvel universes, the Mignolaverse of comics at Dark Horse would lend themselves well to a wide variety of gaming genres. A B.P.R.D. title that took inspiration from the third-person gameplay of Resident Evil could be exciting, with players taking on the role of Major Ben Daimo, Roger the Homunculus, or the aforementioned trio of Hellboy, Abe, and Liz. It's also possible that a B.P.R.D. game could take a similar route to 2022's Evil Dead: The Game. Saber Interactive's impressive multiplayer title authentically translated the Evil Dead license to the gaming medium, allowing players to take on the role of survivors from the Sam Raimi movies and Ash vs. Evil Dead TV show or as a Kandarian Demon to stop them. A similar premise could work for B.P.R.D.only with agents being sent in to stop a particular supernatural threat – perhaps inspired by the Plague of Frogs arc – and an opposing player taking on the role of a sinister force trying to stop them.

Equally, while the prospect of an ensemble B.P.R.D. game is cool, a slower-paced, story-driven Hellboy title could be even cooler. The horrific and charismatic characters found in FromSoftware's Soulsborne games have much in common with those encounters Anung Un Rama has in the Hellboy comics. Hellboy is always able to find beauty in the horrific, and a story-driven game that incorporated the character's often unsuccessful diplomacy with his shooting and melee prowess could be compelling – particularly when he's forced into battles with enemies three times his size. Something with the atmosphere of Elden Ringbut with the presentation of Rocksteady's Batman: Arkham games, could capture the nuances of Mignola's Hellboy comics, combining moments of levity and dark humor with gothic horror and melancholy.

It certainly seems as though it's a matter of when and not if a new Hellboy game gets made, in light of Embracer's acquisition and Dark Horse's prior motions to the gaming industry. Regardless of that, a new title based on the world of Mike Mignola's comics needs to tap into its aesthetic, and ultimately have the polish and authenticity the license deserves. Hellboy has never gotten his Batman: Arkham moment, but hopefully, that'll soon change.