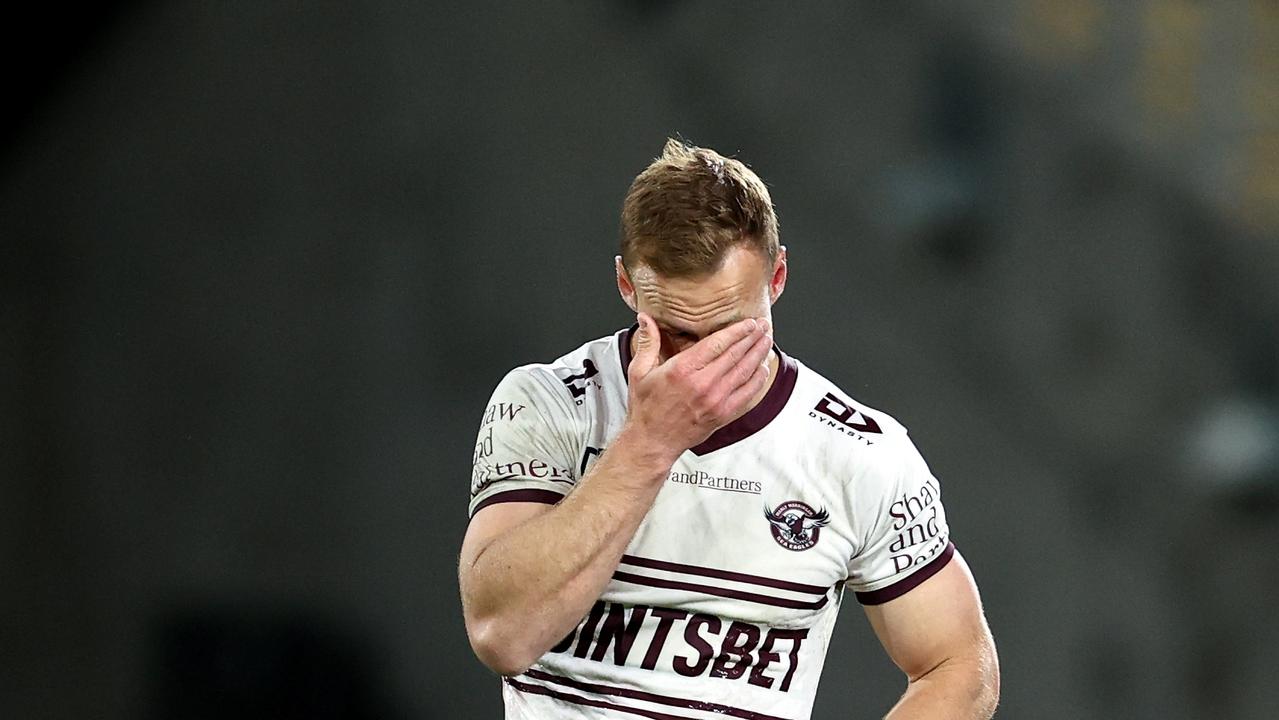 Manly captain Daly Cherry Evans has admitted he considered leaving the club in the wake of the turmoil that has engulfed his side in 2022.

The Sea Eagles lost seven straight games to finish the season amid the pride jersey saga and calls came for Jake Trbojevic to replace Cherry-Evans as skipper.

Des Hasler was also blueing with owner Scott Penn and it’s still no clearer if the veteran coach will be going around again in 2023.

“People just want to cause uncertainty and I know that sounds ridiculous, how could people at a club want to rip the place apart,” Cherry-Evans said.

“But unfortunately that is the situation we have at Manly. So those things I can’t control. The playing group I can have an impact on.

“I’m really confident about where I stand and where the playing group stand with each other.”

Cherry Evans was asked about his alleged split with Polynesian players in his side and whether he was the best man to captain the club.

“I thought that was pretty funny to be honest considering how comfortable I am with all of my teammates let alone the seven that didn’t play and the rest of the Polynesian group,” Cherry-Evans said.

“They are just rumours that came out because people wanted to unsettle me as a person.

“But the longer it went on and the more people I spoke to the more I realised that these were just personal attacks and there were certain agendas that were trying to be driven, but I’m really comfortable with my relationships at Manly.

“I’ve said from the start I am a big fan of Des Hasler and I’m a big fan of him being our coach for as long as he can do that,” Cherry-Evans said.

DCE was then asked if he’d considered leaving the club over the drama.

“I’d be lying if I said it didn’t cross my mind,” Cherry-Evans said.

The NRL 360 panel sprayed the Manly skipper on Wednesday night for inconsistencies in his stance on the controversies embroiling the club.

“Daly Cherry-Evans said he considered walking away during the latest drama to engulf the Sea Eagles and has hit out at people within the club who are trying to rip it apart,” Braith Anasta said on NRL 360.

“Come on, this is the captain of the club,” Kent said.

“He started that interview by saying, people want to cause uncertainty at this club. And he ended it by saying, I’d be lying if I said leaving didn’t cross my mind.

“That is uncertainty. The captain is saying it crossed his mind to leave the club, given what is happening within the club.

“He is answering the questions without actually giving any truth to what is going on at Manly.

“He went for the answer that is the least offensive in every instance.

“You cannot sit there and say, people want to cause uncertainty. Well who are these mystery people. When he is uncertain himself. He didn’t know whether he wanted to stay or go. He is the captain of the club.”

Phil Rothfield then revealed the club was no closer to stability than after a crisis meeting between Hasler and Penn two weeks ago.

“The club is as messy if not messier as it was two weeks ago when Scott Penn was here before he got on a plane back to New York,” Rothfield said.

“He left with a bit of certainty that Des will be there next year. There is none now. It is remarkable.

“I think when Penn left there was uncertainty because he walked out of a meeting with Des and there was two completely conflicting views of that meeting on what came out of it,” Read said.

“And nothing has changed. I’m not sure des will be there next year.”