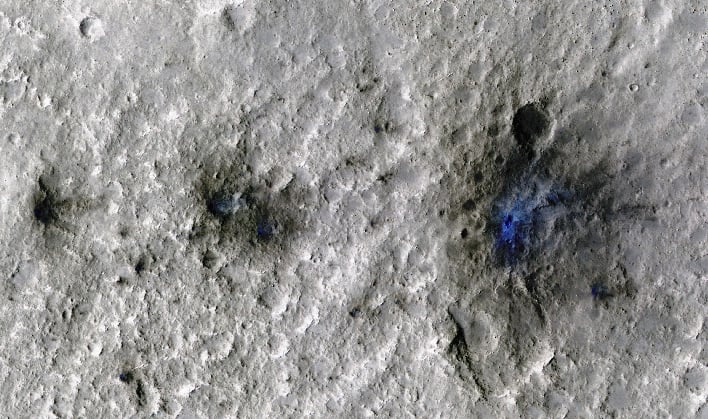 NASA's InSight lander has captured the first audio of a meteoroid impacting another planet, and it sounds quite different than one might imagine. The lander's seismometer has been able to pick up vibrations from four separate impacts in the past two years.

InSight first landed on the Red Planet in 2018. Since its arrival, the spacecraft has been able to capture seismic and acoustic waves from four different impacts on Mars. Scientists were able to detect the first marsquake caused by a space rock on September 5, 2021. This impact was the first time seismic signals were detected on another planet.

A new paper published earlier this week in Nature Geoscience lists the details surrounding the impacts. They ranged from between 53 and 180 miles (85 and 290 kilometers) from the lander's location in a region of Mars called Elysium Planitia. It was the first of these impacts, however, that seemed to be the most dramatic, according to NASA's Jet Propulsion Laboratory. This particular impact, which occurred a little over a year ago, is thought to have exploded into at least three different shards, each leaving a crater behind on the Martian surface.

Following the impact, NASA's Mars Reconnaissance Orbiter took flight in order to confirm the location. Utilizing its Context Camera, the orbiter was able to identify three darkened spots on the surface. Once the location was determined, the team then used the High-Resolution Imaging Science Experiment camera, or HiRISE, to get a color image of the craters. Scientists believe there could be at least three more craters, but they would be too small for the orbiter's HiRISE camera to capture.

“After three years of InSight waiting to detect an impact, those craters looked beautiful,” remarked Ingrid Daubar of Brown University, and co-author of the paper.

The audio that emerged from the September 5, 2021 event sounds more like a rock being dropped into a pond, rather than a piece of space rock slamming into the surface of a planet. This odd sounding impact is caused by a “peculiar atmospheric effect heard when bass sounds arrive before high-pitched sounds.”

The fact that the lander has not detected more impacts has puzzled researchers. Mars is located near the solar system's main asteroid belt, which in turn should provide more than a few space rocks entering the Red Planet's atmosphere. Due to Mars' atmosphere being 1% as thick as Earth's, more meteoroids should pass through without disintegrating.

While InSight's seismometer has detected over 1,300 marsquakes, the September 5, 2021 event was the first that could be confirmed as being caused by something crashing into the Martian surface. The instrument is so sensitive, it can detect seismic waves from thousands of miles away.

The data being collected by InSight is being used to refine Mars' timeline. “Impacts are the clocks of the solar system,” explains the paper's lead author, Raphael Garcia. He continued, “We're learning more about the impact process itself. We can match different size craters to specific seismic and acoustic waves now.”

The lander could be entering its last months of service, due to dust buildup on its solar panels. This buildup is reducing the lander's power and will eventually shut it down completely. Engineers believe it could actually lose power between October of this year and January 2023.