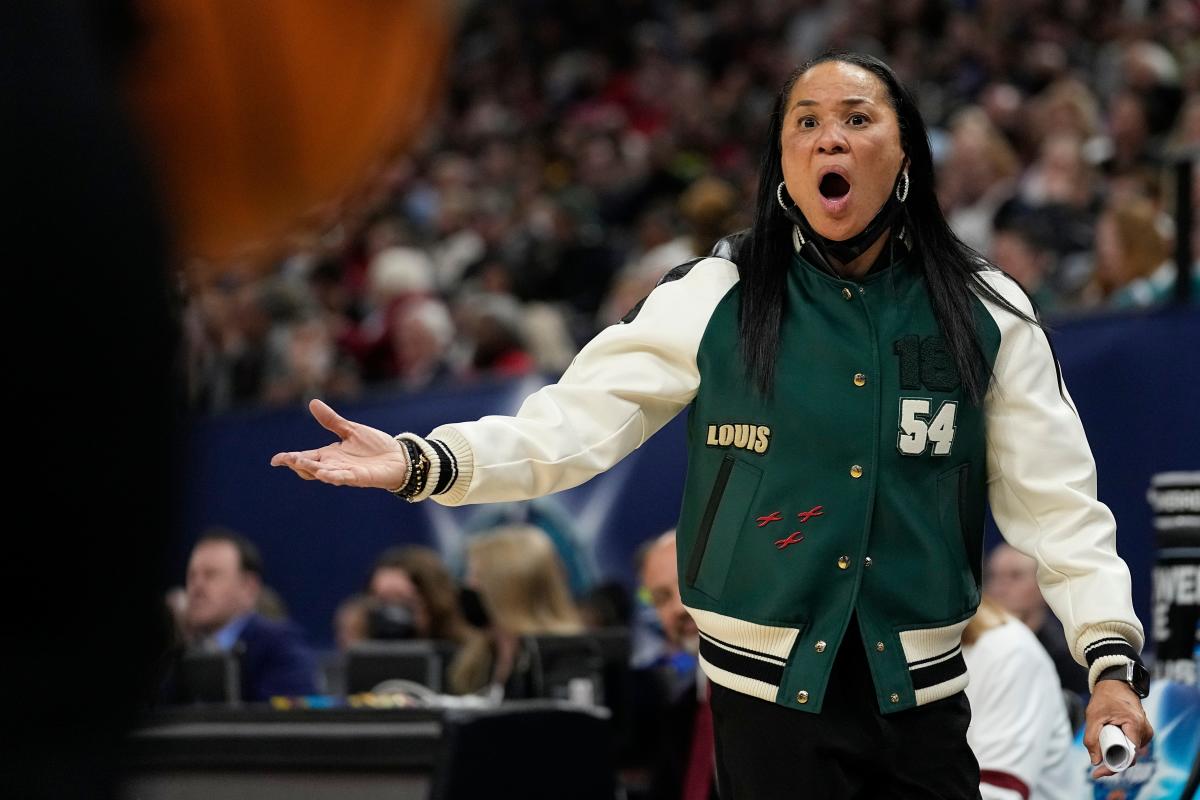 Dawn Staley has a secret she needs to tell the world. South Carolina’s women’s basketball coach apparently knows what really happened at a BYU-Duke volleyball match a couple of weeks ago.

It turned out to be a lot more than a volleyball match. It detonated the latest racial mushroom cloud, and the fallout continues.

“After my personal research,” she said, “I made a decision for the well-being of my team.”

Out of control recruiting: Texas’ romancing of Arch Manning shows how recruiting has gone absolutely batty

It’d be nice to know what her research discovered, because BYU’s investigation turned up squat. Somebody needs to be held accountable, but who?

Duke’s Rachel Richardson has perpetrated a hoax, or BYU allowed an unruly racist to rain down N-words on a visiting player.

I can’t say because I wasn’t sitting in the student section that night in Provo, Utah. Neither were you, nor Staley, and nor the media, university officials and poohbah influencers who’ve reacted to the incident.

Perhaps no epithets were yelled, but Richardson sincerely believes they were. One thing I know is that when it comes to race, she has been conditioned to immediately conclude the worst in people.

She’s hardly the only one.

“We have her back. This is not sports,” LeBron James tweeted.

I’m saying BYU – you did it!” ESPN’s Stephen A. Smith bellowed.

Dozens of volleyball teams at other universities posted #StandwithRachelRichardson hashtags on their social media accounts. Some wore black armbands in matches to show solidarity.

Utah Gov. Spencer Cox tweeted how disgusting the incident was. BYU officials immediately banned a spectator they thought might be guilty.

Then they began their investigation.

The rush to judgment was predictable. We saw it when the social justice world detonated on NASCAR after a noose was supposedly found in Bubba Wallace’s garage.

The FBI scrambled a team to Talladega, only to find the rope was a door pull that had been there long before Wallace’s team was assigned to that garage.

We saw it when a Colorado fan supposedly peppered Miami Marlins outfielder Lewis Brinson with the N-word. That triggered a media onslaught, with one columnist calling for the man to be jailed.

It turned out the guy was yelling “Dinger!” trying to get the attention of the Rockies’ mascot for a photo.

It doesn’t matter if the specific allegation is true. It represents a greater truth that racism exists. And to even question that proves you’re a racist.

Sure enough, that’s how this one’s playing out. The narrative is BYU is 1% Black and Mormons have a tainted racial history and how can anyone trust the school to investigate itself?

Well, there were 5,007 fans at Smith Fieldhouse. Cops have pleaded for eyewitness or cell-phone evidence, and nobody’s stepped forward.

Were they all sworn to secrecy?

Nobody who was actually there has corroborated Richardson’s story – not even her teammates.

And that fan who got banned? It turns out he’s a mentally-challenged kid who had no idea what all the hubbub was about. His lifetime ban has been lifted.

Duke has issued a boilerplate statement saying how it deplores hate and bias. It didn’t address BYU’s specific findings. A lot of people just want to move on, but this has turned into a political football.

Republican South Carolina lawmakers want Staley to justify canceling the series with BYU. Democrats say South Carolina has no business taking up the cause of a school that’s “affiliated with a well-funded denomination, in a state 2,000 miles away.”

Red or blue, it shouldn’t matter. The truth should matter.

There are more than enough people guilty of racism. It undermines the fight when innocent Americans are reflexively condemned.

There’s also the matter of precedent. Should a coach be allowed to cancel a series based on evidence she won’t share?

What if Staley pulled out of basketball game against Florida for same reason?

What if a visiting player thought she heard a racial taunt at the O’Connell Center during a volleyball match? Would the SEC allow Staley to unilaterally pull out of games against Kelly Rae Finley’s basketball team?

“It wasn’t a knee-jerk reaction,” she said. “I don’t knee-jerk anything.”

Fine, but can’t she at least clarify her decision?

Richardson is being labeled a liar. Jussie Smollett 2.0.

Staley's a respected coach with a lot of well-earned clout. If  she can back up Richardson's story, I’m sure the Duke sophomore would very much appreciate it.

If she can’t, Staley owes BYU an apology, if not a couple of basketball games. The Cougars hopefully aren’t holding their breath.

A South Carolina spokesman told me Monday that Staley has no plans to further address the issue. Whatever evidence her investigation turned up shall remain sealed.

Given what we do know, I believe Staley found that a lot of knees jerk when it comes to race. And people care more about promoting their agendas than seeking the truth.

No wonder she wants to keep things secret.