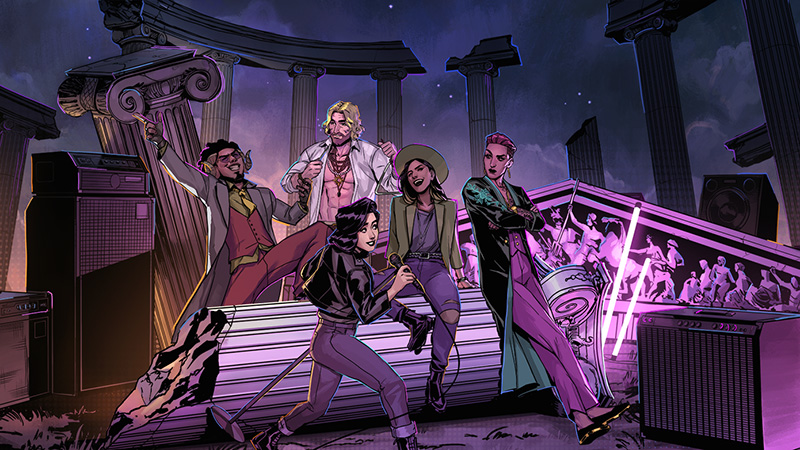 “A roleplaying musical? How does that work?” That was my primary question during PAX West 2022 as I met with David Gaider, former lead writer of the Dragon Age series, to discuss his new project.

Stray Gods: The Roleplaying Musical has a familiar format to fans of Gaider’s prior work, but the concept can be hard to wrap your head around at a glance. A song, after all, is typically more structured than most written dialogue. And that rigidity doesn’t lend itself to the spontaneity of player participation.

So what does such an unconventional premise look like in practice? It turned out that not only was Stray Gods surprisingly functional, but it had some lessons for other developers wanting to play around with the classic musical genre.

An Idea is Born

The idea for Stray Gods came while Gaider was still working at Bioware. At the time, he was thinking about using the format as a downloadable content expansion for the Dragon Age series. Though that musical-themed expansion never came to fruition, Gaider held on to the concept. He revisited it later when he and his collaborator, Summerfall Studios co-founder and managing director Liam Esler, began to build their company. “It was kind of on my bucket list,” Gaider explains. An interactive musical was fun in theory, but execution was another question. “It [was] like, ‘Oh, what are we doing? Well, gotta be an interactive musical, that should be easy, right? You're in a song, you make choices like you do in dialogue.’ [But] figuring that out has been the big challenge.”

Traces of Gaider’s narrative design past can be seen in Stray Gods’ format, which relies on choice-based dialogue structure. The game stars the Greek Pantheon in a dark, modern-day setting. It tells the story of Grace, a Muse who is caught in the middle of a murder mystery when her predecessor Calliope dies in her arms. Out to prove her innocence to the other gods, Grace must investigate the circumstances surrounding Calliope’s death, her path leading her through dialogue with many key mythical figures, many of whom engage Grace in song.

At PAX West, Gaider and Esler chaperoned me through Stray God’s opening sequence and twice-through one of its musical numbers. Rather than cut scenes of static material, the game allows the player to contribute lines to each song through its dialogue system, feeding their responses to move the sequence along.

This, of course, requires timing, a factor affected by the unpredictable nature of audience participation. To address this, the game uses a timer wheel that displays Grace’s available responses, choosing one based on her default character profile if the player does not select one in time.

These options then inform not only how a conversation between characters plays out, but also how the scene’s accompanying musical piece takes form, including aspects of the arrangement, like instrumentation. Whatever they choose will also have an effect both on the immediate scene and the end-game, directing the course of Grace’s investigation.

As Gaider explains, the game has hundreds of permutations depending on players' choices in dialogue. In play, the effect leans more towards opera than Broadway musical, in that the songs play out like spoken-word ballads, with room for variance. The refrains, however, are powerful and follow established genre rules, with frequent callbacks weaving throughout the game.

One of the composers is Austin Wintory (Flow, Journey), who elevated the game’s core musical concept to include multiple arrangements of each song to better accompany Grace’s three character profiles, Kick-Ass, Clever, and Charming. Pulling this off was a particular challenge, as the tone of the song can change at any time in response to the player’s choices. Says Gaider, “Normally, in the dialogue, if you're familiar with RPG play, traits come up as requirements for certain options. But in [Stray Gods’] songs, they form stylistic options.”

“You can make choices based on how you feel at the moment like, but the trait path changes the style of the music itself. So if you go to Kick-Ass, it's going to become more aggressive, more drums, more percussive; if you move to Charming, that's a little bit sweeter, that goes a lot more into the strings. It can go back and forth depending on how you make your choices and Austin has been very clever in making sure that if you do that, it transitions gradually back into the other style so that it feels like a cohesive whole.”

During my demo, much of the audio and art was bookmarked by placeholders. Nonetheless, even with some of the vocals and arrangements supplemented with temporary stand-ins, the performances were powerful. And they’re strongly supported by the art direction, a moody, graphic novel style that mirrors the darker tones of the musicals that inspired the game, like Into the Woods, Wicked and Buffy the Vampire Slayer.

The character designs themselves, supplementing this visual style, are also of note; piercings, asymmetrical haircuts and perfectly winged eyeliner abound. This take on the pantheon appearance is a deliberately contemporary reimagining. Says Gaider, “The eidolon–when an idol dies that their eidolon is passed on to somebody else– means they can be anyone, we don't have to say, ‘Oh, they have to be Greek.’ Well, no, some of them have died like dozens of times. So this is some person down the line.” This deeply enhances the game’s narrative themes of identity and fate, as characters must come to terms with inherited memories that are not their own.

As they become beings that are split between their earthly and immortal selves, they grapple with not only centuries of trauma but the damage of losing their sense of self. “How do they deal with all the traumas from their past? If you never forget them, do you just…bring all that with you?”

The game’s cast of Greek gods, and their new look, bring to mind the similarly modern take depicted in 2018’s Hadesa comparison that Gaider and Esler do not seem to mind. “Hades kind of put people in the mood for Greek gods again. I think it's a plus if anything–it shows that there's interest there. We're taking familiar characters, the Greek gods, and we're kind of subverting them a little bit,” Esler says, citing Persephone, whose in-game temperament and appearance are miles from most depictions of the goddess.

In Stray Godsshe has killed Hades and taken over the Underworld, only to have it usurped by other gods. “She’s angry because everybody only knows the story that she was kidnapped and forced to be his wife. And then what? They had to live together for a thousand years. She grew to hate him and finally killed him. Then other gods took the Underworld away from her. So she's, she's very angry and, and ruthless. This is a very different version than what we've seen.”

This divine makeover is fitting given Stray Gods’ penchant for reinvention. But the demo also reveals a game mechanic that, for whatever risks it takes, works well in context. By eliminating the issue of timing with the dialogue wheel and autoselect feature, the player’s participation is no longer an obstacle to each song’s flow.

And with that out of the way, the game is free to lean into broader experiential variances and deepen the impact of player choices rather than sticking to surface elements of the design. I look forward to seeing how this narrative cohesion plays out on a micro and macro level upon Stray Gods’ full release.