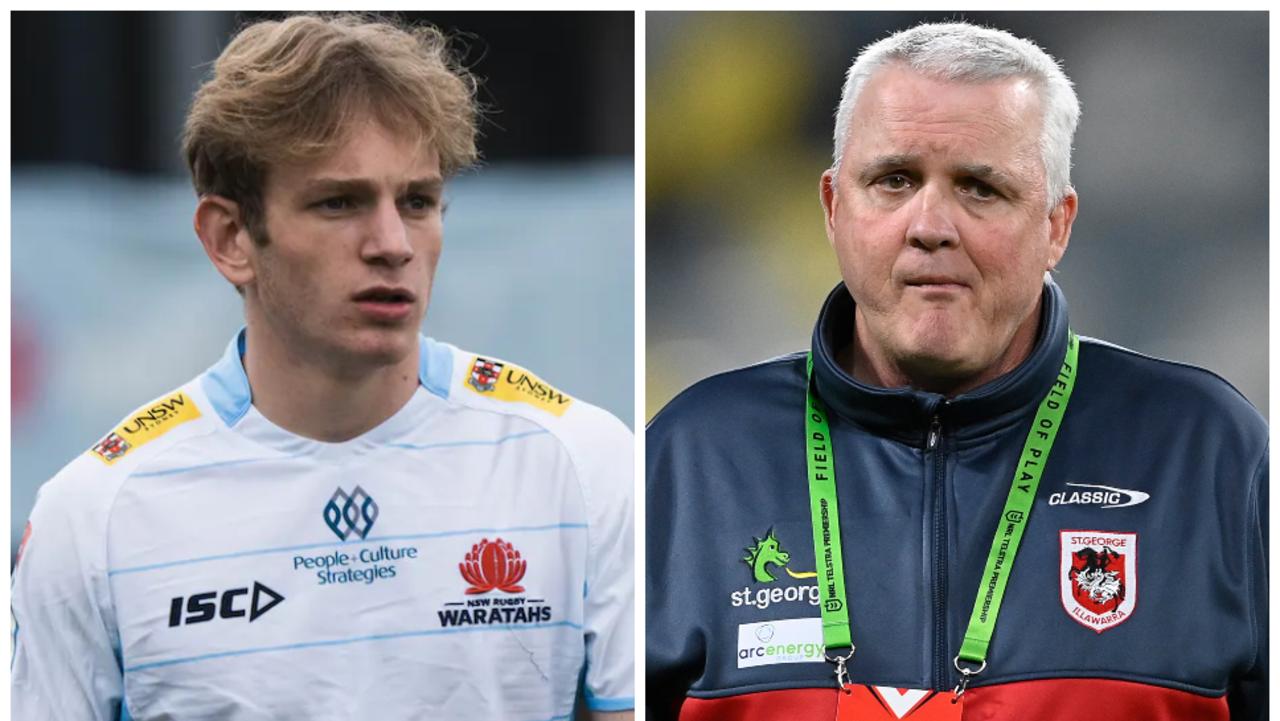 The Sydney Roosters thought they’d landed another huge recruitment coup in the form of schoolboys rugby union star Max Jorgensen only for the teenager to backflip at the last minute.

Jorgensen, the son of former Roosters, Panthers and Wallaby flyer Peter Jorgensen, had gone as far as telling the Roosters he intended to join the club only for rugby union to trump the Tricolours at the final hurdle.

The Chooks even had the teenager in the Allianz Stadium dressing rooms on the opening night of the new stadium prior to their round 25 victory over arch-rivals South Sydney to try and seal the deal.

With the Roosters boasting an all-star backline including James Tedesco, Joseph Manu and Joseph Suaali’i, the young gun rugby union player has instead opted to remain in the 15-man code by inking a two-year contract with the NSW Waratahs.

The Roosters next major recruitment move is trying to convince teenage superstar Suaali’i to remain at the club for the 2024 season before May of next year – forgoing the option in his contract to have a look around elsewhere.

It’s interesting St George Illawarra chairman Craig Young has taken a much greater hands on role in the space of recruitment and retention for the Dragons.

Young has become heavily involved around the Red V negotiations with captain Ben Hunt and out-of-favour fullback Tyrell Sloan in the last fortnight.

Both players have held meetings with the retired champion forward who is now seen as the figurehead of the Dragons in a bid to resolve their futures.

Sloan certainly hasn’t held back about his opinion on being left out of the NRL side in meetings with Young and also coach Anthony Griffin.

St George Illawarra remain adamant they won’t be releasing Sloan and have asked the local junior to be patient in terms of his development as a player.

Read into that what you will but it’s no secret coach Griffin needs a fast start to next season to ensure his own job security.

Sloan is signed with the Dragons until the end of 2025 and has strong support at the Red V as being a huge part of the future of the club.

The St George Illawarra extension for Hunt appears to be on target with the only hitch being whether they include a clause in the contract surrounding Dragons coach Anthony Griffin.

The question has been asked from the Hunt camp but it’s unlikely St George Illawarra will want to go down that road.

Hunt is Griffin’s staunchest ally and it’s all tracking towards the Dragons halfback signing a two-year extension with St George Illawarra for 2024 and 2025.

By that stage Hunt will be turning 35 in March in the final year of the deal.

In fairness, given Hunt’s level of professionalism there’s no reason the champion halfback couldn’t kick on even longer.

The move to get Young more hands on is a smart play from the Dragons.

The champion prop bleeds red and white after winning premierships with the Dragons in 1977 and 1979 and will always put the best interests of the club first.

IT’S been a remarkable achievement by South Sydney coach Jason Demetriou in his first year at the helm to pilot the Rabbitohs into a preliminary final.

Aside from having the unenviable job of following supercoach Wayne Bennett into bat, Demetriou also had to contend with losing star players Adam Reynolds, Dane Gagai and Jaydn Su’A.

When Latrell Mitchell went down with a hamstring injury in round five, plenty of people were prepared to put the red pen through South Sydney even making the top eight.

But off the back of the return of Mitchell in round 16 and Cody Walker growing into the role of being South Sydney’s dominant playmaker, the Bunnies have built their season perfectly leading into September.

Not many people will give the Bunnies a chance leading into the preliminary final against premiers Penrith but if there’s one thing Demetriou has shown this year he’s got great attention to detail when it comes to the art of coaching.

The game plan South Sydney devised to roll the Roosters in week one of the finals after being convincingly beaten by the Chooks in round 25 is the perfect example. Good coaching.

There were never any question marks in the mind of the man he succeeded about Demetriou having what it takes.

Bennett had such a high opinion of Demetriou he also pushed him as the best option to replace him at the Brisbane Broncos back in 2019.

The Wests Tigers latest halves pursuit of Mitchell Moses reminded us of one of the best lines out of the all-time classic Australian comedy flick The Castle.

Granted, Darryl Kerrigan had a lot of funny one-liners. One of his best: “Tell him he’s dreaming”.

Good on the Wests Tigers new brains trust of Tim Sheens, Benji Marshall and Robbie Farah for being prepared to roll the dice and have a crack at trying to sign the Eels halfback.

But there’d need to be some serious bridges mended after the way Moses left Concord following the opening 67 games of his NRL career at Wests Tigers.

Aside from asking for and being granted a mid-season release to join Parramatta in 2017, there was also an ongoing strain with Tigers champion Farah.

The pair never saw eye-to-eye and it would take all of Marshall’s best negotiating skills to be able to heal the rift.

The other element of it all is what sort of message are the Tigers sending to the player and local junior they should be building the club around in Adam Doueihi?

Doueihi has been the Tigers best player for the past two seasons and is a free agent as of November 1.

Rival clubs will no doubt come knocking given the Tigers pursuit of Moses and Cameron Munster.

It was a case of “get-in-the-queue” for Penrith Panthers king pin Brian Fletcher when the premiers beat arch-rivals Parramatta in week one of the finals.

Aside from the Panthers moving to within 80 minutes of a third straight grand final appearance, Fletcher is also a part-owner in two very good horses.

After Penrith rolled the Eels Friday night, the Stephen O’Dea-trained Scallopini then led all the way to win a listed race at Flemington at the strong each way price of $7.50.

Then to really send the weekend into orbit, another horse Fletcher has a share in – the Chris Waller-trained Waterford – saluted in the last race at Rosehill at the shorter quote of $2.10.

Connections of Waterford are now hopeful the horse can gain a start in the second richest race in Australia the $8 million Golden Eagle at Rosehill next month.

In the meantime, Fletcher and the Panthers will be cheering for the club to qualify for a third straight grand final by rolling the Rabbitohs in the preliminary final on Saturday night.