Why Adults Still Dream About School 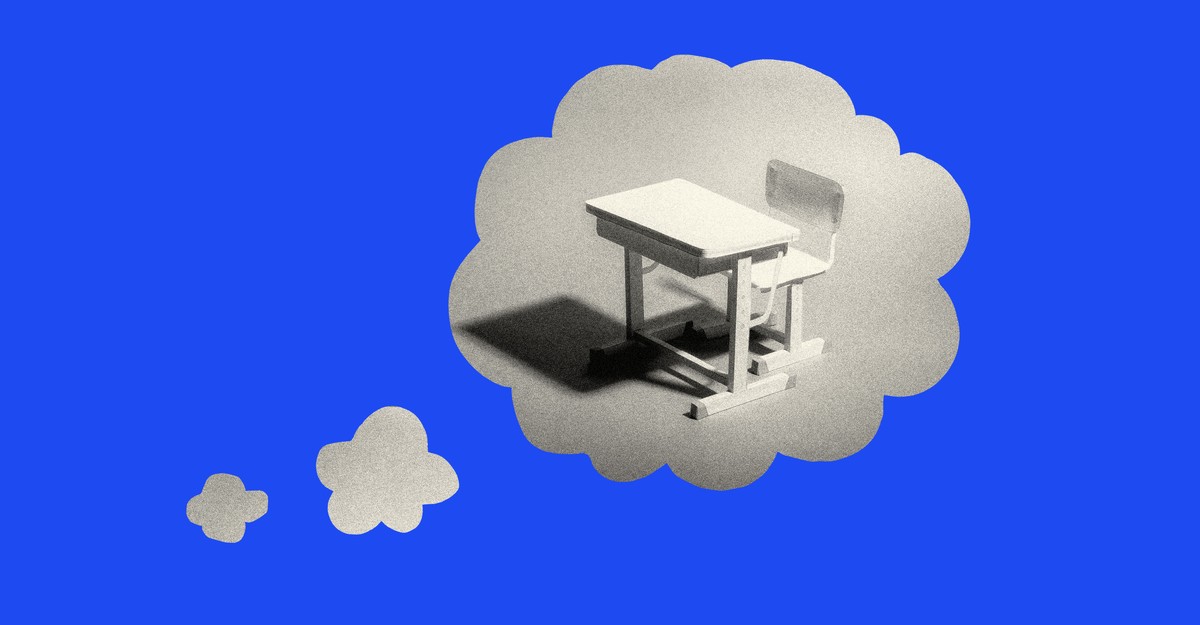 I have a recurring dream. Actually, I have a few—one is about dismembering a body (I’d rather not get into it), but the more pertinent one is about college. It’s the end of the semester, and I suddenly realize that there is a class I forgot to attend, ever, and now I have to sit for the final exam. I wake up panicked, my GPA in peril. How could I have done this? Why do I so consistently self-sabota—oh. Then I remember I haven’t been in college in more than a decade.

Someone with intimate knowledge of my academic career might point out that this nightmare scenario is not that far removed from my actual collegiate experience, and that at certain times in my life, it did not take the magic of slumber to find me completely unprepared for a final. And, well … regardless of what may or may not be true of my personal scholastic rigor, I suspect the school-stress dream is quite a common one. Even among nerds.

Deirdre Barrett, a dream researcher at Harvard University and the author of Pandemic Dreams and The Committee of Sleepconfirmed my suspicion. She rattled off a few common school-dream variations: The dreamer has to rush to an exam after having overslept, or they can’t find their classroom, or they prepared for an exam by studying the wrong subject, or they sit down for an exam and the text is in hieroglyphics, or they show up to school nude. “It’s a really common theme,” she told me. “And it’s common not only for people who are still in school … It’s a very common theme for people who are far into adulthood, who have been out of school forever.”

Read: What can our craziest dreams tell us?

Barrett explained that these dreams tend to pop up when the dreamer is anxious in waking life,  particularly about being evaluated by an authority figure. She’s found that people who wanted to act or play music at an early age tend to experience anxiety dreams not about school, but about auditions—in their youth, that was where they interacted with the authority figures who could most easily crush them. In each of these dream scenarios, we revisit the space where we first experienced success or failure based on our performance.

To find out what my specific performance-based anxiety dream means, I went to Jane Teresa Anderson, a dream analyst and the author of The Dream Handbook. Although science is undecided about the exact purpose of dreams, Anderson believes that dreams are the result of your mind attempting to process memories, both conscious and unconscious. Aspects of your past might come up in a dream to help you categorize new experiences (even if you aren’t conscious of the connection) and maybe, as Anderson put it, “wake up with a newly shifted mindset.”

What might be behind “that dream scenario that you’ve picked out, being back at school and having to take this final,” she told me, is “feeling tested in life, feeling that you have to respond to other people’s expectations,” and feeling that I’m not meeting those expectations. “So you think back to school.”

Certainly, we feel tested by people other than teachers throughout our life: bosses, the IRS, guys on Twitter with names like @weiner_patrol_USA. The reason school dominates as a go-to anxiety setting, Anderson said, is because school is where we build our understanding of how life works. “So much stuff happens in school that really sets your foundational beliefs and really sticks there in your unconscious mind,” she said. Feelings of stress, inadequacy, embarrassment, heartache—these often happen first in the school setting. “It can be very hard to shift those beliefs,” she said.

But the system of beliefs ingrained in us starting at age 5 (or earlier) may not really be applicable to adult challenges. Knowing that can be helpful in separating reality from the feelings that lead to school-themed anxiety dreams. “You can then go back and say, ‘Well, when I was 15, I was a different person, but … I know it was the expectation of my father that I do well on my tests,’” Anderson said. “‘Am I now still actually responding in life as if my father is expecting me to do well?’”

Too real, Jane Teresa. But I was curious about whether there is also a primal reason for why people remain enrolled in night school until death. My guess at the evolutionary purpose behind these dreams: reminding aging dreamers that being young was actually not that fun. But Barrett has a different theory: It’s about “what was important to survival.”

Obviously, in terms of evolutionary history, the amount of time that students spend in classrooms is a blink of an eye. But the experience of learning skills from authority figures who might increase our chances of survival is much older. “Even though physical survival is not necessarily in question for many people … certainly, what is taught in school are skills that are necessary to do well in life,” Barrett said. If feelings of inadequacy prompt you to have an anxiety dream, and if that anxiety dream prompts you to study harder, you might just have a better chance of “surviving” AP calculus—or a big work presentation. That, Barrett said, has “an evolutionary purpose.” (“In general,” she quickly added.)

Read: The ways to control dreaming

Still, if you’d like to defy evolution and finally graduate from dream school, Anderson has a method. First, make the connection between the events in your dream and the recent events in your life, so you can learn something about what you’re feeling and more easily let it go. Then, she said, “you revisualize a positive ending”: Immediately post-dream, while you’re lying in bed, imagine the dream scenario again, but this time with a more calming outcome. The example she gives is a teacher telling you that you’ve already passed the class. You don’t need to do thisthey might say. You’re fine. “And although that seems to be just changing the outcome of the dream,” Anderson said, “it will actually change your mindset, whatever the situation is in your life that you’re responding to.”

Well, it’s worth a shot. You don’t have to take a final right nowI’ll envision my professor saying. And by the way—you can stop dismembering that body.

Has the media gone too far writing about Anthony Bourdain’s death?

What is déjà vu? What researchers have discovered about phenomenon previously thought of as paranomal