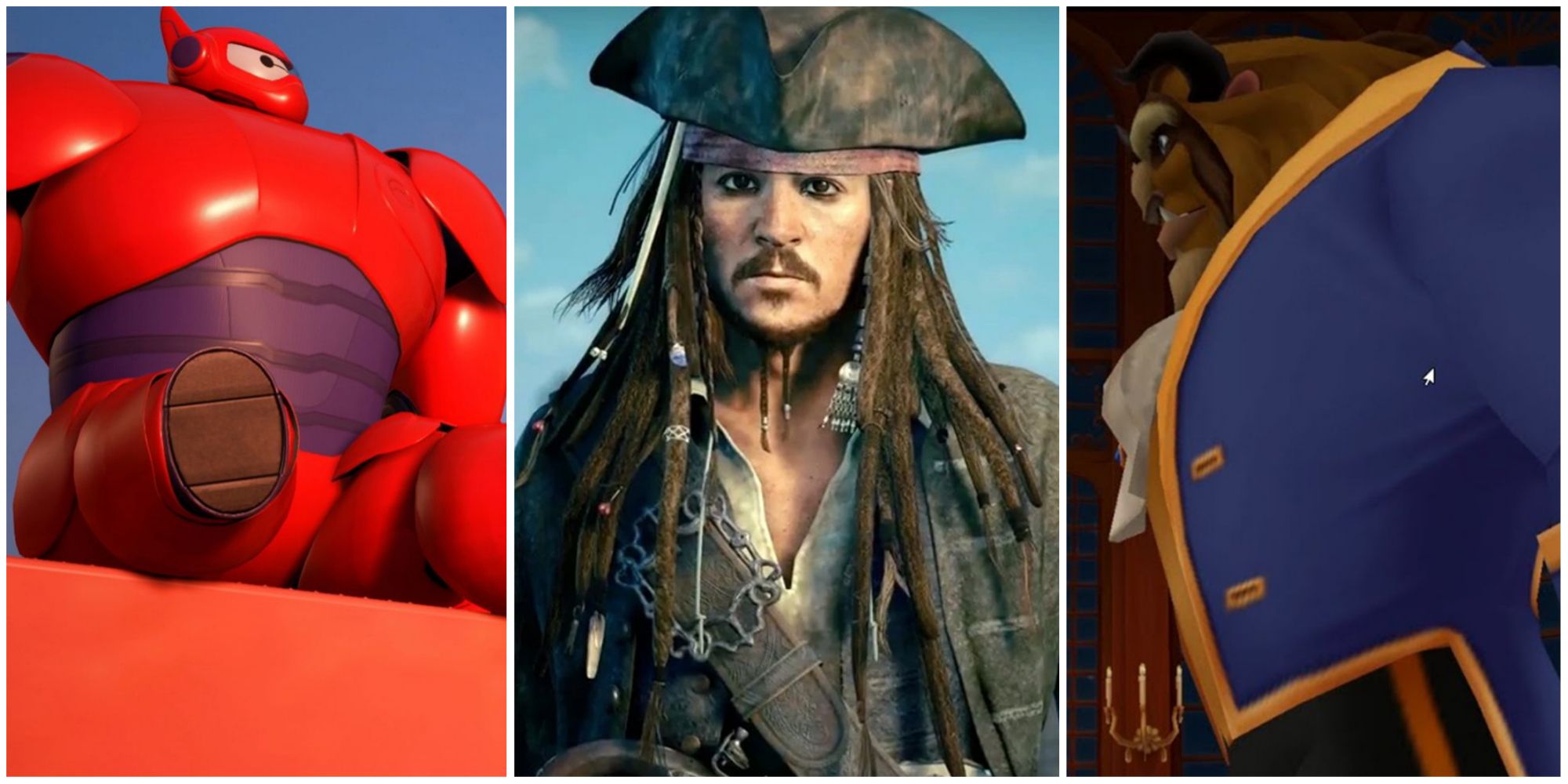 The game uses Disney characters in a variety of ways. Some of them help out the protagonist by physically joining Sora's party to fight alongside him. Other characters help in basic utility or provide narrative context for the story. The characters in this list are those that managed to be some of the most memorable in the story or in how they helped Sora and friends along the way.

Aladdin–in the Kingdom Hearts games–is as cunning as he is in the Disney movie. He joins the team in many of the games and offers a fun variation as to how Goofy plays. He's a little weaker than Goofy in terms of the damage per hit that he puts out, but he does more hits per second.

Aladdin is very fun to have on the team, and having him there adds to the investment that the player has in his different worlds' stories. His swords are also the most satisfying weapons to watch slice through the Large Body heartless.

If any of the Kingdom Hearts games that included Sora were to take out Jiminy Cricket, that would be one of the biggest video game tragedies. He's been on the journey since the first game, and his character adds a pleasant atmosphere to each title. It also feels nice knowing that he records every journey that Sora's gone through in his journal.

The lore Jiminy Cricket carries in his diary is some of the most interesting to dive into; it gives the players a much more well-rounded and well-thought-out version of the story unfolding around them.

Jack Skellington is precious in his own creepy way. He appeared in many of the games and feels a lot like his Character in The Nightmare Before Christmas. A lot of the time, he seems too lost in what he values as his purpose at the time–whether that be with creating a perfect Halloween or Christmas. He feels like an overtly ambitious and impulsive character who seeks validation from others yet always comes to the realization that he must come to accept and embrace himself.

He is also wonderful to have on the team as he is wildly eccentric and cheerful in nature. He's always trying a little too hard, but that's what makes him lovable.

Beast is a very complex character that is, in a way, difficult to understand–especially in Kingdom Hearts 2. In Kingdom Hearts 2, beast is in a rage and throws his servants into the dungeon. He even gets in a fight against Sora, Donald, and Goofy. It's pretty off the cuff as it shows him unable to control himself until he's beat to his senses.

He is a character that is extremely flawed and prone to aggression in the series, and that comes out in his fighting style with big heavy damaging attacks.

Donald is extremely silly in nature as he gets hot-headed quickly, but the anger always comes out in comedic ways that make people want to laugh at him and give him a hug instead of getting frustrated. The character is always at Sora's side in the main series when players choose to have him on the team.

Donald is exceptionally powerful as a mage, and watching him grow stronger until he's using the same caliber of spell that Sora uses–as well as watching him use his own powerful attacks–is magnificent.

Goofy serves as the main tank class of the game and provides really heavy strength-based attacks throughout the series. He's great to have on the team as he will always fight to his fullest extent. He does notable area of effect damage with different moves that can, a lot of the time, help players set up great combos.

Goofy's personality is also contradictory to what most would expect as he is the most intuitive of the trio and deduces a lot about situations that give key details to the game's narrative.

Jack Sparrow first appeared in Kingdom Hearts 2 and is one of the best characters to be around. He feels like he's always disoriented and slurring–most likely due to him having had a little too much to drink. Though he carries these characteristics with him, a lot of his personality is also amplified in the games as he has a lot less of an ego and more of a sense of ethics.

Jack has an explosive arsenal of attacks when he's in Sora's party–quite literally. He throws bombs at heartless and flings a flurry of sword swipes, getting a large area of enemies' health low and ready for Sora to take out.

Baymax is one of the most interactive characters on this list. He appears for the first time in Kingdom Hearts 3, and his kit is one of the best. He's almost the perfect combination of Donald and Goofy as he deals a large amount of damage to enemies but is also heavily focused on healing the different characters in his party.

Sora is additionally able to jump on Baymax's back and control Baymax, which lets him shoot projectiles at enemies and do an attack that unleashes a flurry of punches. Baymax also keeps his stoic yet caring personality from the Big Hero 6 movie, and it translates well over to the Kingdom Hearts series.

Simba has an interesting role in Kingdom Hearts as he appears in most of the games that feature Sora except for Kingdom Hearts: Dream Drop Distance. In most games, he appears as a summon, but in Kingdom Hearts 2 his character appears as a companion that players can fight alongside. Simba is quick and powerful, able to unleash a barrage of quick attacks on the enemy. He also has the ability to cure is teammates, though his damage is where he excels.

Simba's story–throughout the Kingdom Hearts series–is intricate in its presentation. In the first game, his world had ceased to exist, but his spirit was able to live on. This then goes into his world coming back and all the events that occurred in The Lion King happening in Kingdom Hearts 2. He's a great character that has a lot of depth.

Mickey Mouse is one of the primary drives as to how the Kingdom Hearts adventure starts off and is one of the main protagonists of its story. Suspending disbelief for Mickey can be kind of difficult as he's so silly in his design–watching him talk about serious matters can feel like the setup to a joke with a punchline that never comes, though he still adds a lot of profundity to the series' story.

He has some extremely cinematic moments in the story with his cool array of Keyblades. Players will have many moments where they get to play Mickey and see how powerful he is as the primary Guardian of Light in the series. All of his big moments will still make his personality feel like it's the setup to a joke, but it'll feel more like his personality and aesthetic is a facade to mask the true potential he has inside for both power and kindness.

NEXT: Most Unique Game Mechanics