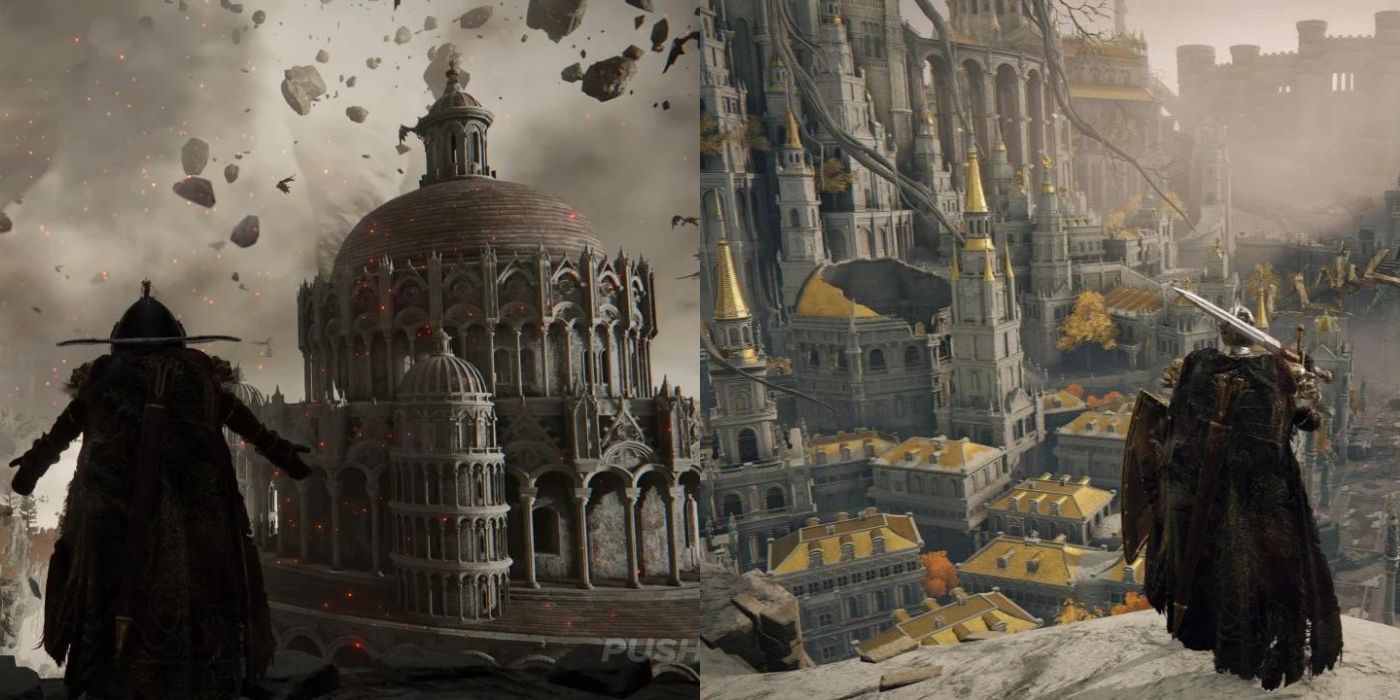 With the exciting news of Steamforged Games turning FromSoftware’s Elden Ring into a board game, invading tactics used in the video game may find yet another use. In Elden Ring’s PvP Invasion locations, each time the player’s skill level increases, so does the level of their opponents. Generally, once a high enough level is reached, the invader will have to battle not just one foe, but at least two.

The challenge is welcome to the most ambitious and fortified players of the game, though others would rather stay in their own lane. Where the player chooses to invade must be weighed out in a risk-to-reward basis, and some locations are just too worth it to pass up. From the distracting stomping of the Giants on the Mountaintops Of The Giants to the narrow corridors of Raya Lucaria Academy, taking into account the environmental elements of each location and using them as an advantage can easily lead a player to swift victory.

Lower-level invasion areas like Siofra River may not be the best for farming rewards, but prove to be a pretty entertaining. As the player mows down foes they can relax a little knowing that nothing insanely strong is going to pounce at them at any moment.

With the offensive help of the Ancestral Archers wandering about the area, defeating foes becomes all too easy, making for a decently quick and easy battle. Since the location displays a wide-open spot with very little obstructions to hinder the Ancestral Archers, the host is left extremely vulnerable as they are fired upon by the spirit beasts.

The First Step Site Of Grace

Known by fans of Elden Ring as one of the easiest areas to invade, The First Step Site of Grace is a convenient invasion location that almost every player has, since it is the very first Site of Grace encountered within the game.

The map allows for players to be near enough to each other to gain support, but it does come with its faults. Without many foes nearby, the player won’t run the risk of being overrun in that sense. However, helpful enemies won’t be around to aid the player, leaving them with a considerable chance of being attacked by multiple teamed-up players at once.

Another invasion location that is reached by players early on in the game, Stormveil Castle is a place where home field advantage matters and should be fully explored before invading, since leading the hosts into a trap of harmful enemies can grant an easy victory.

The area is used best when both players are still at a low level, but being a couple levels higher or lower than the host can make or break chances of success. Luckily, most people who invade and host in this area are new to the game, so the danger of it dwindles down by a decent amount.

Truly utilizing the great invasion potential of Volcano Manor is quite simple once the area is fully understood, specifically due to it being inhabited by Recusants, which the player can exploit to recruit Man-Serpents.

Though there are plenty of various foes that aid well in invasions, the Man-Serpent is much more valuable of an ally, since they wield a sword and shield. The Volcano Manor may be a treacherous location, but these summonable enemies add a certain charm to it, even more so when they facilitate a win.

Liurnia Of The Lakes

The Liurnia of the Lakes is a large body of water where not many enemies reside, which is helpful not only when the player gets stuck in a tough spot, but also while going against hosts with the most powerful magic builds in Elden Ring.

Since there are many barriers to exploit against ranged attacks and spells, magic users will have a severe disadvantage. Furthermore, the area works well for invasions of lower and high levels, so don’t shy away in intimidation if the host is more powerful. Having lesser damage and smaller stats are the only downside, though because of this, the player isn’t likely to die quickly.

The Crumbling Farum Azula is a perfect pick for players who yearn for an adrenaline rush backed by the onslaught powerful foes, only made better by exploiting the disadvantages of the location at the host’s expense.

While the host is busy battling the strong enemies of the area, like dragons, they leave their backs open for the invader to join the enemy in taking the host down. Due to the high-leveled nature of the environment and opponents, most fights will be over as quickly as they started.

Mountaintops Of The Giants

Living up to its name, the Giants that venture about the lands of the Mountaintops of the Giants are plentiful, making for an easy distraction when invading unprepared hosts. The area becomes much easier to invade when running specific builds as well.

Without obstacles to fortify their defenses and much danger amiss, the host will be at the mercy of the invader and their summons. Having a build that prioritizes damage is key to taking on the Mountaintops of The Giants and will give the player a bigger chance to advance further as massive enemies' pummel the unfortunate host.

Not even the best antidotes in Elden Ring can save the player from the insanely insidious and fatally narrow spots sprinkled throughout Miquella’s Haligtree, infamous for tripping up even the most skilled invaders.

Although, the generous number of formidable enemies roaming the land somewhat balances of the disadvantages of the invader, since they can be extremely helpful in offensive progression. Lower locations of the Miquella’s Haligtree are much easier than other spots, but caution and high alert is still recommended.

The Raya Lucaria Academy is equipped with several great benefits that come with invading the area, like the NPC foe near the location’s most powerful boss, that can be teamed up with to take down the host.

Unlike previously discussed invasion spots, the Raya Lucaria Academy has one specifically awesome trap, which is a boulder that the invader can lure the host under to vanquish them in an instant. In fact, there may not be any funnier than flattening your opponent instead of using the best weapons in Elden Ring.

The least aesthetically apocalyptic invasion location, aka Lyndell Royal Capital, is a breath of fresh air for players. Its charming creatures and gold-roofed buildings make it seem like a fairytale land, until the snowmen murder the in-awe, distracted invader with bubbles.

There is a slew of different foes to encounter here, as well as areas that are made for invasions of any build. As a favorite spot for players, Lyndell Royal Capital’s various wide open or cut-off zones are entirely addicting to explore and conquer, as long as the player doesn’t lose focus while listening to the amazing sound of the horns.

Next: 9 Best Fantasy RPGs For Fans Of House Of The Dragon