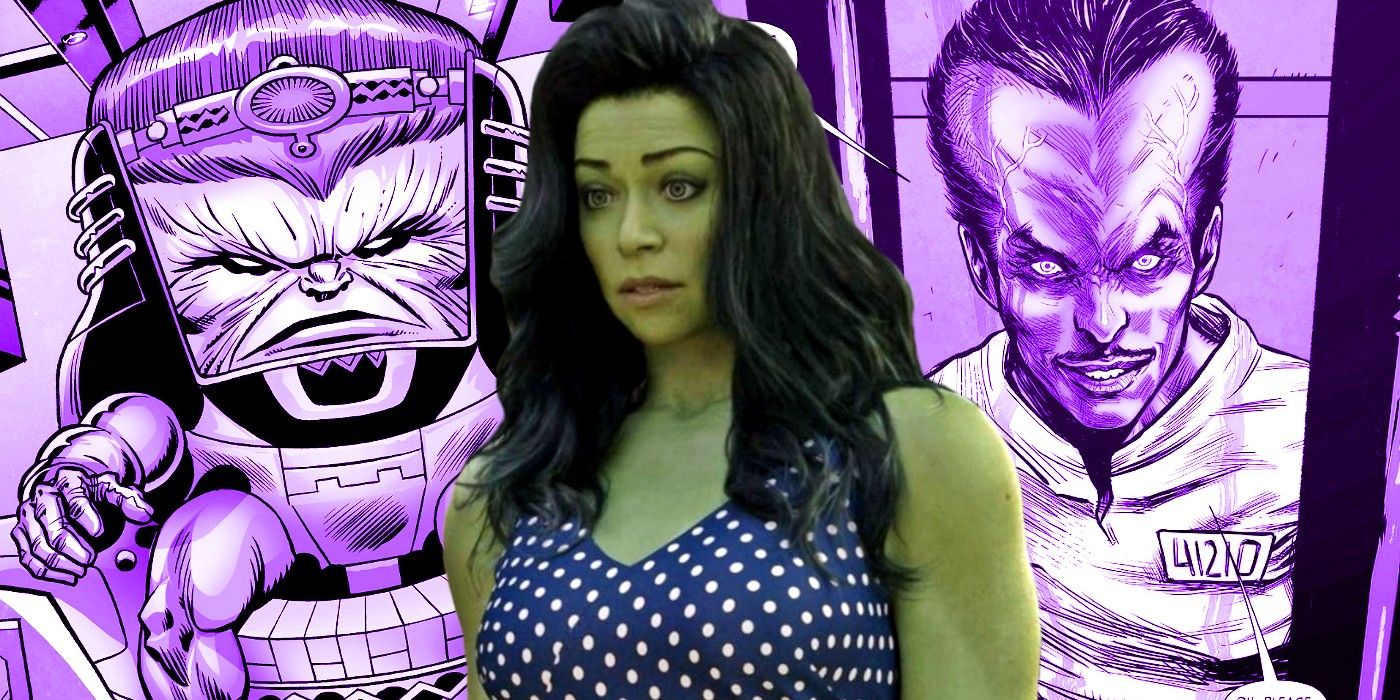 There are plenty of She-Hulk: Attorney At Law villain theories and every single one would be great. The origin story for Tatiana Maslany's Jennifer Walters on Disney+ has seen her encounter plenty of trouble. She-Hulk‘s design as a half-hour legal comedy gave Marvel Studios room to introduce her to various “villains” and other life problems. The episodes often revolve around Jennifer's troubles dating, her difficult legal cases, or fighting bad guys. Through it all, Marvel has continued to drop various teases about who the real villain is, leaving plenty of room for She-Hulk speculation and theories.

Much of the mystery about She-Hulk‘s villain comes from the lack of information Marvel has given about the remaining episodes. It is also worth noting that the MCU Disney+ shows have a history of introducing the real villain late in the game. This includes bringing in notable characters for the very end of a season, as Loki featured Kang the Conqueror and Hawkeye featured Kingpin. The setup for She-Hulk‘s villain is much broader, with episode 6's mention of the Intelligencia delivering potentially the biggest clue yet as to where the story is going. It also opens up several exciting possibilities for whom the show's antagonist really is.

Some of the earliest theories about She-Hulk‘s villain might not come to pass now since Abomination is on parole and in his human form. However, the show has dropped various teases for some amazing reveals. Marvel, unfortunately, cannot use all the She-Hulk villain theories. Still, the vast speculation points to how the remaining episodes of the season can incorporate past MCU villains, notable comic threats, and other fun possibilities.

The Leader Could Be She-Hulk's Villain (Before Captain America 4)

There seems to be real momentum behind the She-Hulk villain theory that The Leader is the show's big bad. Questions about The Leader's fate after The Incredible Hulk were raised by She-Hulk‘s earlier episodes, as it was implied that he could have died due to his gamma exposure. Marvel Studios has since confirmed that Tim Blake Nelson is returning as Samuel Sterns as The Leader is Captain America: New World Order‘s villain. It is a surprising place for The Leader to make his MCU return, but it would be less of a shock following an appearance in She-Hulk. The show has set up that someone is after She-Hulk's blood, and it would make sense for a gamma radiation expert like Sterns to be especially interested in her DNA. The case for The Leader being She-Hulk‘s villain has even been strengthened by episode 6's reveal of Intelligencia, which is originally a villain organization that The Leader is part of in the comics.

Another popular theory for She-Hulk‘s villain is MODOK: the Mental Organism Designed Only for Killing. Like The Leader, MODOK has strong ties to Intelligencia, as he helped reform the team and has repeatedly served as their leader in the comics. It was even MODOK and The Leader who developed a means to create Red Hulk through a combination of gamma and cosmic radiation. Now that She-Hulk has confirmed Intelligencia plays a role in what is to come, MODOK could be orchestrating events behind the scenes. He might want to get Jennifer's blood as a means to unlock the power to create more Hulks and use them to take over the world. There were even some unfounded internet rumors that Marvel secretly cast Jim Carrey as MODOK for She-Hulkwhich were never backed up by reliable sources but have resulted in theories about the giant Marvel villain being involved circulating for some time. The confirmation that MODOK will be in Ant-Man and the Wasp: Quantumania could complicate this, though.

She-Hulk May Tease Young Avengers' Hulkling Is A Villain

There is also a possibility that She-Hulk‘s villain will be a future Young Avenger, Hulkling. This would be a surprising move for Marvel to make, as Hulkling is traditionally a hero in the comics. The She-Hulk villain theories for him started thanks to episode 6 and a message from HulkKing. It is worth noting that a future version of Hulkling goes by the name King Hulk. Meanwhile, the username is just one letter from Hulkling's regular comic name. Phase 4 has made great strides in setting up the Young Avengers, but Hulkling is the one prominent team member yet to be introduced. Teddy Altman is not actually connected to Hulk in any sense, though. That does not have to prevent Marvel from making a fun reveal and setting up Phase 4's Young Avengers by including Hulkling in She-Hulk. His Skrull lineage could even provide the show with some Secret Invasion setup, which happens to be the next MCU Disney+ series.

Related: Marvel’s MCU Young Avengers Cast (As We Know It)

One of the other prominent She-Hulk villain theories suggests Red Hulk is the one who is really behind the show's events. Red Hulk's origin is directly tied to Intelligencia, but the villain group has taken on a new form in the MCU. That might include having Red Hulk be the leader of the team and the one who desperately wants Jennifer Walter's blood. The introduction of Red Hulk has been something viewers have been waiting for since The Incredible Hulk. It is a more difficult proposition now, as Thunderbolt Ross actor William Hurt passed away recently. That leaves Marvel in a place where it might need to recast Thunderbolt to use Red Hulk. However, the comics also have given other people the Red Hulk mantle, so She-Hulk could feature a new character who has Red Hulk aspirations. There is even the chance the MCU will go the Red She-Hulk route.

She-Hulk episode 6 added a new villain candidate by introducing Josh, the charming guy that Jennifer meets at her friend's wedding. While Josh and Jennifer hit it off, it is difficult to shake the knowledge that Intelligencia is monitoring their interactions together. Josh could be a good guy who has nothing to do with criminals and wanting to steal Jennifer's blood, but She-Hulk has also repeatedly shown that Jen's love life does not usually end well. Having her new potential love interest be a crazy guy who works with She-Hulk‘s Intelligencia and possibly wants to give himself Hulk powers would make sense for the story. There is even a chance that he was one of the Wrecking Crew members who attacked her before or is the one they were talking to.

Titania Is Set Up To Be She-Hulk's Real Villain

Many She-Hulk villain theories might be focused on introducing new characters to the equation. Still, the show has so far given every indication that Titania is the main antagonist for season 1. Jameela Jamil's character was the first person She-Hulk fought with and has since started a major rivalry with her. This included suing Jennifer for using the She-Hulk name and coming to the wedding in episode 6 to get her rematch. There is clearly still more to come from her storyline, so Titania being She-Hulk‘s villain is entirely plausible. Her status as a super-powered social media influencer has brought in a lot of money, so she could be the one funding Intelligencia's research. At the very least, it will not be surprising if Titania is working with the organization in some fashion, with Marvel possibly only teasing the answer of who she works for. This would allow She-Hulk: Attorney At Law to avoid the MCU's TV villain trope of introducing someone new late in the season and instead keep the focus on resolving Titania and She-Hulk's rivalry.

New episodes of She-Hulk: Attorney At Law release on Thursdays on Disney+.

James Gunn Reveals Scooby-Doo Movie You Never Got To See