How I Shop: Julio Torres 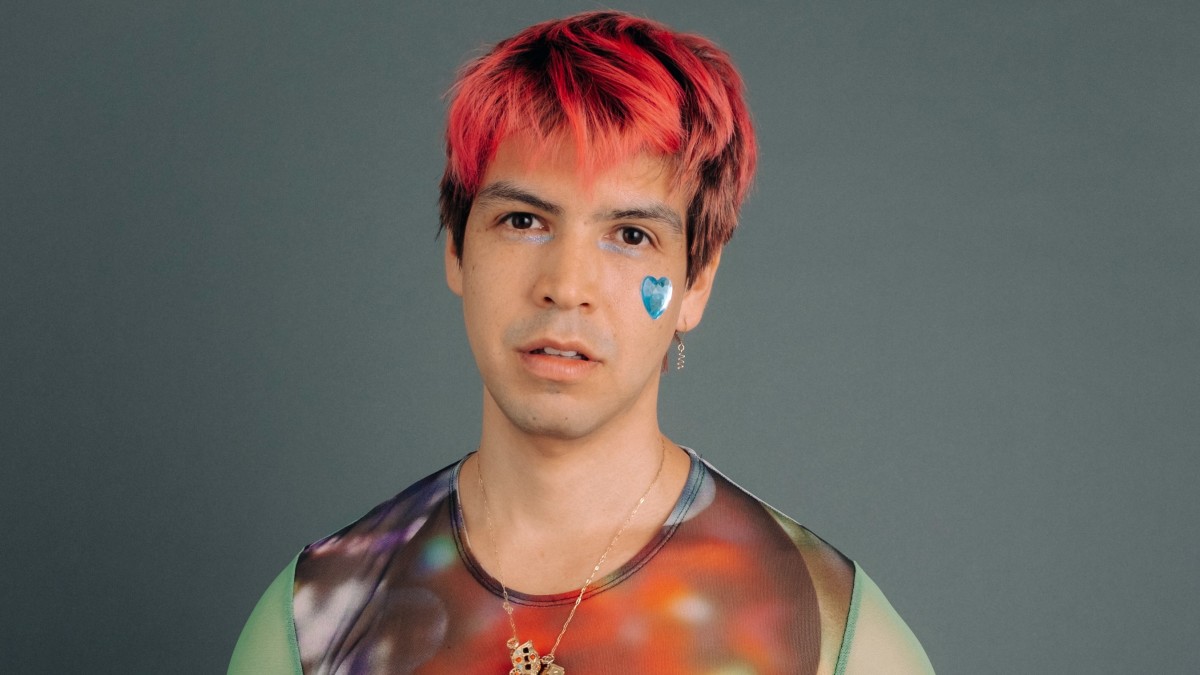 We all buy clothes, but no two people shop the same. It can be a social experience, and a deeply personal one; at times, it can be impulsive and entertaining, at others, purpose-driven, a chore. Where do you shop? When do you shop? How do you decide what you need, how much to spend and what's “you”? These are some of the questions we're putting to prominent figures in our column “How I Shop.”

Actor, writer, producer and comedian Julio Torres seems like the type to always have ideas percolating. He may also be wearing them — from his expressive and ever-evolving hair color (highlighter pink right now) to his accessories.

“These are just a bunch of charms I found,” he says, via Zoom, underneath a triumphant watercolor collage of a figure weightlifting (titled “Max Out” by multimedia artist Khari Johnson-Ricks). Torres considerately adjusts his camera to show me each of the emblematic gold baubles around his neck. “We've got a little clown. This guy's a little phone. A little carriage ride… This is a cuckoo clock.” (Remember this, because a theme will become apparent in a few.)

Torres is doing the promo rounds for the way-too-long-anticipated second season of HBO's “Los Espookys,” which ended its critically acclaimed debut in the before-times. (Right before Liza, Maria and I went to see Torres and writing partner, co-creator and co-star Ana Fabrega live in Brooklyn as part of Padma Lakshmi's comedy showcase to support the National Network of Abortion Funds. We're fans.)

Set in a fictional, unnamed Latin American country, “Los Espookys” follows a scrappy, entrepreneurial Scooby gang-meets-performance troupe led by the sweet, horror-obsessed Renaldo (played by Bernardo Velasco); Fred Armisen plays his Uncle Tico; Fabrega inhabits the savant-like Tati, and Cassandra Ciangherotti her goth sister Úrsula. Along with co-writing and producing with Fabrega and Armisen on the ingeniously hilarious, mostly Spanish-language series, Torres plays Andrés, the pampered and deliciously self-unaware heir to a chocolate fortune. (Torres and Fabrega also thoughtfully write the bilingual English and Spanish subtitles, in itself a fascinating and illuminating process.)

Andrés strikes out on his own this season — but without unlimited funds from his parents. Still, he clearly left the family mansion with his full wardrobe (and then some) to venture into uncharted territory, like the grocery store. Andrés treats each of these challenges like his own Oscar-bait costume drama. Or a Vogue spread, rather.

“Andrés is definitely more into editorializing his jobs than he is about performing his jobs,” says Torres. “It reminds me a little bit of ‘The Simple Life.' He's mostly excited about the little outfits he gets to wear.”

After an exasperated Úrsula accuses Andrès of spending all of his Los Espookys money on leather pants and music boxes, he finds a job that fits his skillset: modeling in a staircase showroom. He descends his version of the runway in a gleaming silver suit and a sequined checkered cape, complete with glitter shoes and an on-theme fascinator (above).

Torres collaborated closely with returning costume designer Muriel Parra; the duo even shopped for fabrics together.

“For that scene in particular — which is my favorite outfit that he's worn, ever — we wanted him to feel regal, but also put upon,” he says. “We found this fabric that was very harlequin and very court jester, which is to say that it's a little demeaning, that he has to perform for people. He's like this little clown.” (Torres also sketched the staircase headpiece.)

Since he writes for and plays Andrés, understandably there's some crossover — especially style-wise.

“I'm very into funny accessories. I've discovered that I love hats and I have waves of baroque, like Andrés does,” he says. “But I definitely moved away from blue — I was going through a very blue period when I came up with Andrés.” Torres also avoids ruffles, florals and “too much fabric,” unlike his character.

“I don't like feeling swallowed by fabric, and that's all Andrés is,” he says. “I like that sometimes. He's really tacky. I love it. Sometimes it's like, ‘Oh, God, no one's stopping him,' and that's a problem. No one's editing him down.”

But Torres does, in a way, costume, hair and makeup design his own aesthetic, based on his mood and stage in life. In a recent New Yorker profile, Fabrega explained that Torres went through dark clothing stage to “absorb,” and a silver moment when wanting to “reflect,” for instance. Notably, in his 2019 HBO comedy special “My Favorite Shapes” — in which he reimagines an hourglass, a tiny mirror tile and a marbled lucite toothbrush holder as “Tilda Swinton's apartment” — he's clad in a lustrous silver pleated suit, with glitter flecks on his hands for extra flair in displaying his shapes moving by on a clear conveyor belt. (Parra also costume designed “My Favorite Shapes.”)

Turns out, creativity and artistic talent run in his family: His mother Tita is an architect and fashion designer, who also creates handbags (and décor for Torres's Greenpoint office) with Torres' sister, Marta. He spent his childhood in San Salvador, El Salvador, living above his mom's boutique. The three would collaborate on his wardrobe after he moved to New York City to study at The New School (and then to write on shows like “Saturday Night Live,” which earned him four Emmy nominations). Torres would shop for interesting fabrics in New York and send his finds to a trusted tailor in San Salvador, where his mother and sister would oversee the production.

“I haven't done it in a minute [because of] Covid, obviously, but I'm making to do that again,” says Torres, contemplating his next round of custom designs, which actually sound very Andrés season two. “I'm going through a very ‘castle' [stage] — a harlequin, fantasy moment.”

Ahead, Torres reflects on his current style mood, which is inspired by Zoomers (or wannabe Zoomers), ponders how to wear a recent and very “Los Espookys”-esque purchase and more.

“I'm feeling jovial and playful. I'm at a moment where I'm just finding what the next thing will be. Something that I've realized recently is that everyone is doing ‘fashion,' right? I think it's a trickle-down effect from ‘Euphoria' or something: People are doing fun things with their hair; the earrings are getting bigger; people are mixing and matching patterns. Everyone's turning up the volume a little bit with what they're wearing. Also, everyone's dressed like a little bratty teen — like, everyone has their funny little necklace and the little bucket hat. Everyone's cosplaying as a little teen.

“It's weird: Usually, I'm dressed pretty differently than people, then I'll find someone and I'm like [surprised]'That's something that I would wear…' So now I think I have to find a way to feel like my own person within that.

“I discovered fashion very early on. My mom was a fashion designer when I was a kid. I loved picking my outfits. [When I was] like six or something, I would sketch princess dresses that were very not like what my mom was designing, which was very sleek and sexy and geometric. I loved seeing the bags that my mom would make. My mom's always very much about experimenting and being playful. Nothing is permanent. She'll pick a chair, then she won't like it, so she'll paint it, she'll get rid of it, she'll come up with something new. It's very ever-flowing. Nothing's ever static. That's something I think I've really absorbed — that nothing is final, and really experiencing life and expressing love through projects and creativity.

“I want to design a bag that makes the sound like a cuckoo clock [along with the bird popping out]. You just carry around the cuckoo clock. [Maybe I'd collaborate with my mom on it, but] she's not Baroque. She's not ornate. Sometimes you find a middle ground, but she's definitely sleeker, metallic and geometric.

“I have this tall blue cone hat that I'll wear when I'm performing on-stage sometimes. I'm sort on my way to something with that. Sometimes I like feeling like it's a performance and having fun; you're elevated or odd in some way, to clearly communicate a tone and world build. I mean, I love the idea of a persona. When I started doing stand-up, I dressed in all black and was a little almost robotic. Sometimes I find myself missing him a little bit. I did a lot of metallics for a while. Now, I would love some poofy sleeves — again, in the castle vibe. Maybe the cuckoo clock will become a little backpack or something.

“I never want to go shop, and then I go shopping. It's always like I'm walking by a store and I go in and I'm curious and maybe I'll get something. I never have something specific in mind because I'll never find the thing that I'm exactly craving. If I'm not sketching something to be made, I'm just allowing the city to surprise me.

“Recently, I got this — and I don't know what to do with it — really big ring of gold brass skeleton keys. Spooky castle keys. Maybe I'll like clip that to a belt or something. I just got this watch from Alabaster Industries, which is also a little ‘castle,' but like spooky. I'm really into it, because that's the other thing: It's like castle, but a little a little odd. A little bizarre, dark magic.”

This interview has been edited and condensed for clarity.