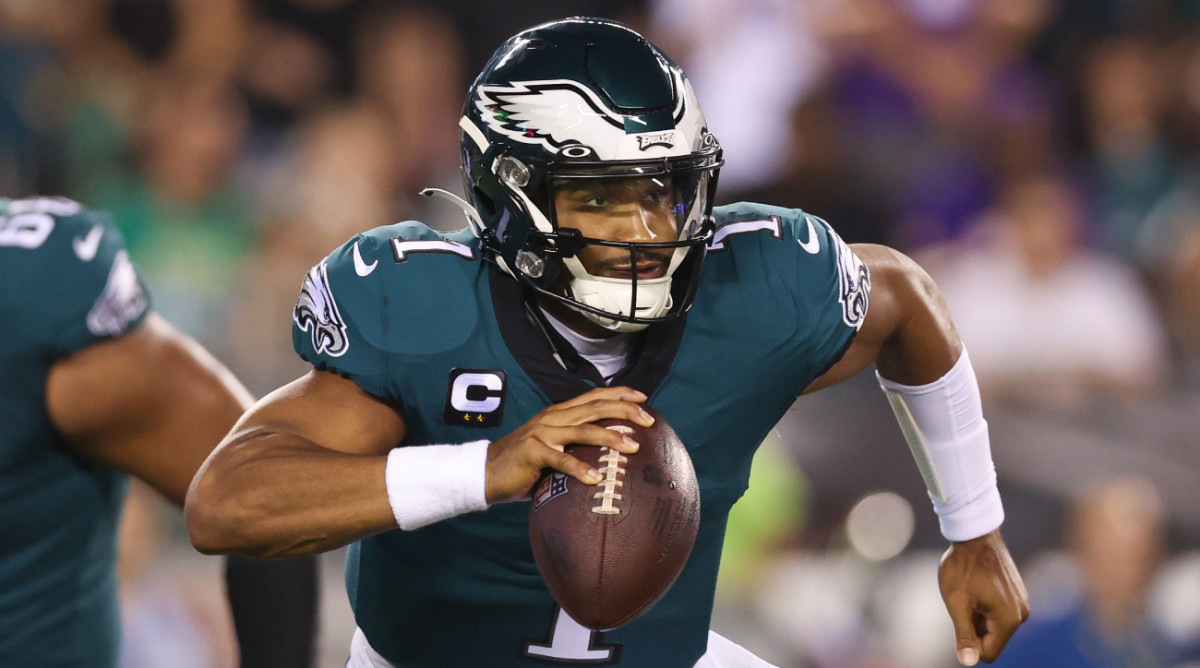 Are you looking to submit some NFL DFS lineups for this weekend? Here are players at every salary level that could help you win in cash or GPP contests.

Josh Allen has the second-most DFS points among quarterbacks, and he'd likely have even more if he didn't embarrass the Titans so badly on MNF that Case Keenum took over so the Bills could protect their superstar. This week he faces Miami in a divisional matchup, and the Dolphins have surrendered the second-most DFS points to opposing QBs. The spend-up should be worth it.

Jalen Hurts is a versatile and dynamic playmaker that racks up points with his legs and through the air. He has the third-most DFS points among quarterbacks, and he gets a Commanders team that has surrendered the 11th-most passing yards and the sixth-most rushing yards in 2022. It's a revenge game narrative and a divisional matchup. I like both quarterbacks in this game with the third-highest implied points total this week on SISB, but Hurts is the only one where you'll have to spend a pretty penny.

Dalvin Cook was nowhere to be found on Monday Night Football, but that should change this week vs. a Lions defense that has surrendered the second-most points to opposing running backs. His disappearance on Monday could work in your favor, as people may pivot away from the star RB.

Leonard Fournette promised us more touchdowns, and I believe him. Why? Because he got chippy on Sunday, he's not fat Lenny anymore, and Tom Brady will be down some of his favorite weapons. The Packers have allowed 6.09 yards per carry and got beat up by David Montgomery last week.

Justin Jefferson was held in check on Monday night, but I don't see that repeating vs. a Lions secondary that has surrendered the eighth-most DFS points to opposing WRs. This is the highest game total of the week, and if you're using a value Kirk Cousins, you'll want to pair him with Jefferson.

Speaking of DFS points, Amon-Ra St. Brown is hoarding them, yet he’s still a decent value compared to Jefferson. This Vikings/Lions game is the highest game total of the week, according to SISB, so leave some room in your budget for one of these studs.

Davante Adams won't be silent for a second week in a row versus a Titans secondary allowing 11.03 yards per target. You can pair him with a bargain Derek Carr who is listed below.

Travis Kelce has accumulated the most DFS points at the TE position, and this week he faces a Colts defense that has allowed the highest catch rate (85.7%) and two TDs to opposing tight ends through two contests.

I know Kirk Cousins disappointed us on Monday, but this week’s game isn’t prime time. With the highest implied points total on SISB and weapons like Justin Jefferson, Adam Thielen, and Dalvin Cook, Cousins should be able to get back on track vs. a Lions team that has allowed the third-most DFS points to opposing QBs through the first two contests.

Matthew Stafford looked sharper in Week 2, and another good week should be in store vs. a Cardinals defense that has surrendered the second-most DFS points to opposing QBs. His salary allows you to spend up for Cooper Kupp, too.

It looks like Josh McDaniels is willing to let Josh Jacobs have the lion's share of the carries, and this is the week it could pay off. The Titans have allowed the third-most yards to opposing running backs and the second-most yards per carry (6.44).

The Rams have allowed 10.58 yards per target and a 75% catch rate to opposing WRs, and that sets up well for Marquise Brownwho should be Kyler Murray's top target.

Derek Carr should be much better this week against a Titans team that has struggled. The Titans have allowed the eighth-most fantasy points to opposing quarterbacks this year. Of course, one of those quarterbacks was Josh Allen, but I'm still willing to roll out Carr and pair him with Adams this weekend.

Finally, Jared Goff is my contrarian QB for the week. If you're entering a large contest, this is a play you could roll with. We keep hammering this game because of the points total, and it's worth noting that Goff is tied for the second-most passing TDs with Justin Herbert and Lamar Jackson. It's also worth noting that the Minnesota defense has surrendered the tenth-most receiving yards and the 11th-most DFS points to opposing QBs. You can pair him up at this price with St. Brown and complete the stack with RB D'Andre Swift.

Cam Akers. Yep, I said it. Look, this is a contrarian play, but that's how you win a GPP. Akers out-carried Henderson 15 to 10, and though he wasn't super-efficient, this matchup vs. the Cardinals could be a good one. Arizona has surrendered the fourth-most DFS points to opposing RBs.

Darrel Williams is playable if James Conner doesn't go. Williams rushed for 59 yards on eight attempts while securing two of his three targets for three yards and scoring a TD in the Cardinals' come-from-behind win vs. the Raiders on Sunday. He could easily get a goal-line carry again this weekend.

Jacob Meyers has seen a 29.7% target share across the first two games of the season, and he led the New England WR room with 55 snaps on Sunday and a whopping 33% air yards share. This week he matches up with the Ravens secondary that surrendered 469 yards to Tua Tagovailoa.

As long as Rondale Moore remains sidelined and DeAndre Hopkins is on suspension, Greg Dortch remains a decent play. The WR has been targeted 13 times across the past two contests, and the Rams have allowed a 75% catch rate (third-highest) to opposing wide receivers.

Garrett Wilson‘s matchup isn't particularly good this week, but Mike LeFleur is getting him in the game any way he can, and Joe Flacco leads the league with a whopping 103 pass attempts. Last week Wilson had 14 targets, eight catches, 100+ yards and a pair of touchdowns, and this price is right.

Evan Engram could break out this week after seeing eight targets for a nearly 27% target share, making him the most targeted pass-catcher in the Jacksonville offense on Sunday. Engram has run routes on 82% of his snaps while blocking only 2.3% of the time this year, and this week he gets a Chargers team that has allowed the fifth-most receiving yards to tight ends. The Jags will likely play catch-up in this game where the -7.5 spread favors the home team Chargers, and we could get a good day from Engram.

Toffees come from behind to seal second straight win