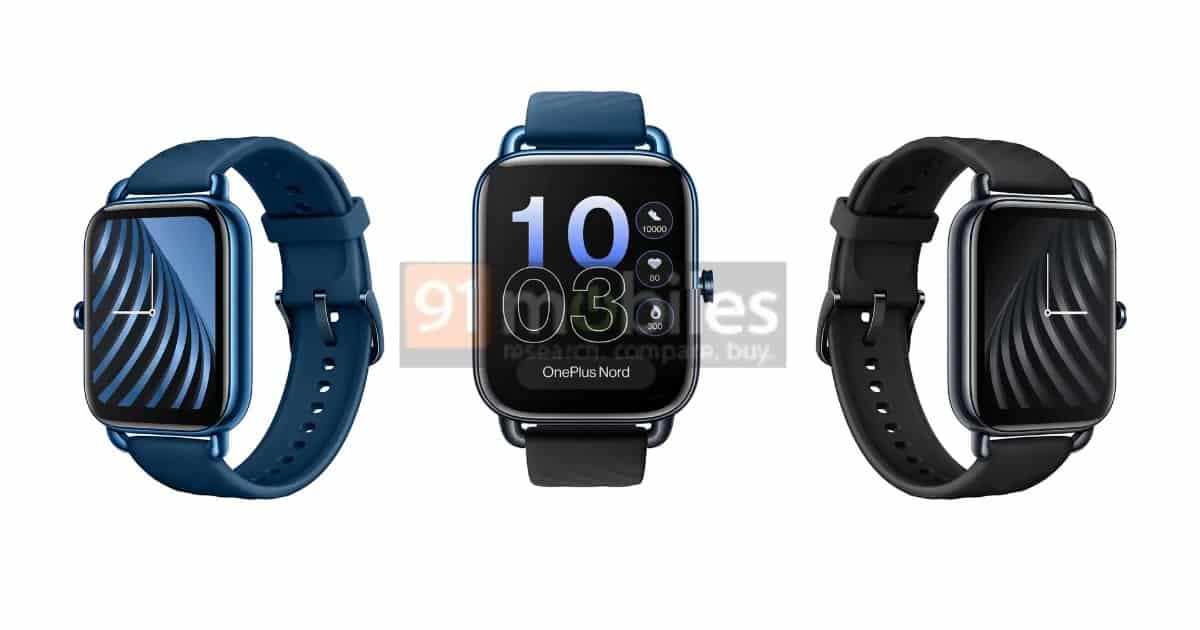 OnePlus is expected to launch the Nord Watch later this month, or early next month. Ahead of that, the company has been actively teasing the new wearable, revealing key information bit by bit. The firm has put up a microsite where it shares some specs about the watch every other day. The microsite already mentions the Nord Watch’s display and watch face details. Tipster Ishan Agarwal and 91Mobiles have now leaked the rest of the device’s specs before OnePlus officially shares them. We also get to see the watch’s renders in multiple colors.

We already know that the Nord Watch will sport a 1.78-inch (45.2mm) AMOLED display with a 368×448 pixels resolution, a 60Hz refresh rate, and a peak brightness of 500 nits. OnePlus will offer more than a hundred downloadable watch faces for the new wearable. The new report now tells us that the screen will have a pixel density of 326 PPI and 2.5D curved glass on top.

The Nord Watch will boast a slew of health features such as SPO2, heart rate, sleep monitoring, stress tracking, and women’s health tracking. Additionally, it will offer 105 fitness and activity modes. You can monitor your activity and health progress through the companion N Health app, which is available for both Android and iOS devices. The watch connects over Bluetooth 5.2.

The new report doesn’t detail the battery capacity of the Nord Watch. However, it mentions that you will get up to ten days of battery life on normal usage. On standby mode, the watch will run for up to 30 days on a single charge. Of course, the battery life will vary according to your usage pattern.

OnePlus will reportedly offer the Nord Watch in black and blue color options. The renders show a square-ish body with hefty lugs and a push button on the right side. The latter could work as a navigation crown as well. The standard silicone strap keeps the same colorway as the watch’s body.

OnePlus may unveil the Nord Watch next week

Some of these Nord Watch features, such as women’s health tracking and activity monitoring, are hinted at on the aforementioned microsite on OnePlus’ official website for India. The company will continue to take the wraps off those details every two days until September 28. That is when we are expecting the Nord Watch to go official, at least in India. A wider availability should follow soon after. We will let you know when we have more information.

Free instead of $4.99: Take full control of your phone’s camera