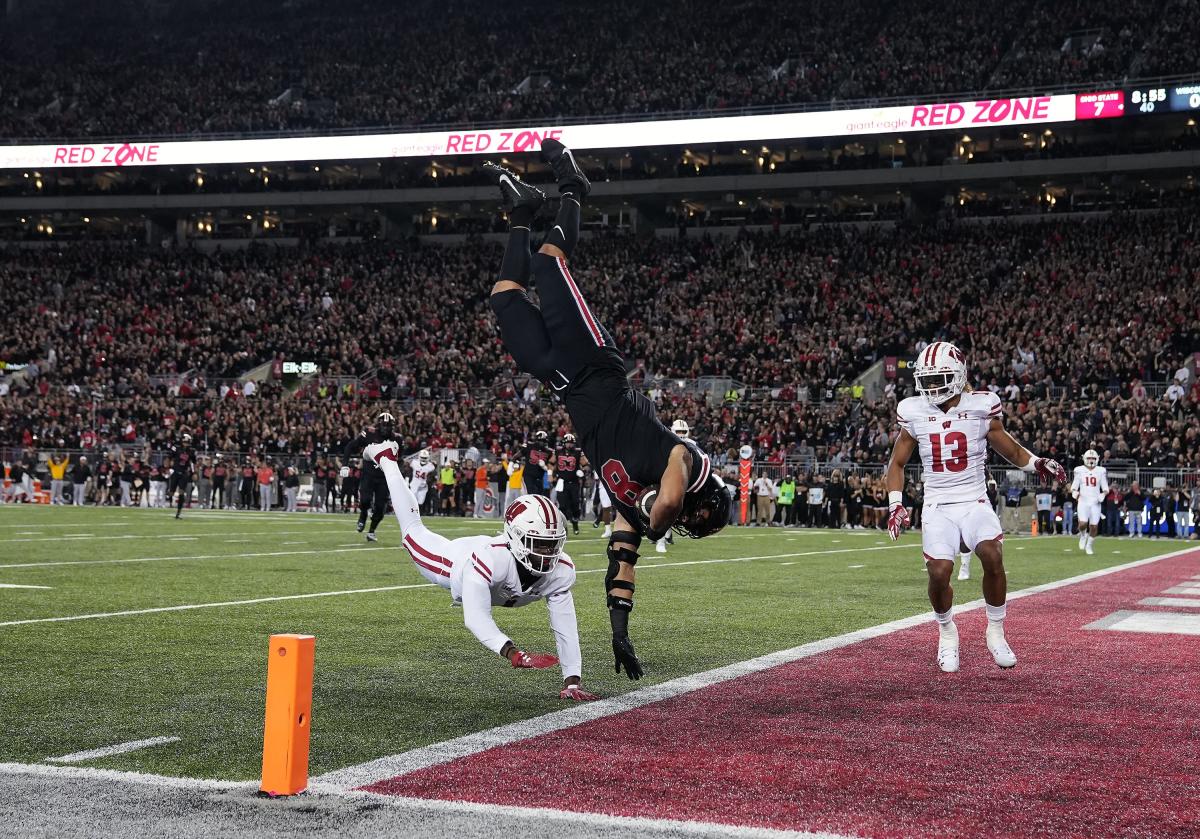 A lot of questions were answered in Ohio State's 52-21 rout of Wisconsin on Saturday.

Would the Buckeyes show toughness against a tough team? Yes.

Is a two-back offense effective? Yes.

Is Wisconsin a limited team? Yes.

After a game in which ABC's talking heads had to pull out all kinds of time-killing stories about Brutus Buckeye, Marvin Harrison Jr.'s shoes and Kirk Herbstreit's kids, Rutgers is next for Ohio State in what looks like a fairly weak Big Ten schedule. Regardless, the Buckeyes appear to be a legitimate national title contender.

Here are five things we learned from Saturday's game:

Tommy Eichenberg is turning into something special

The Buckeyes' linebacker had a quiet 2021 until emerging as the Rose Bowl's defensive MVP, and he has continued to look like a star this season.

He was credited with 14 tackles against Wisconsin. It sure felt like more than that. When he wasn't making tackles, he was swarming and forcing ballcarriers into other Ohio State defenders.

Eichenberg was thought by some to be strictly an inside guy, but he looks sure of himself and is playing fast from sideline to sideline.

On a team with so many offensive stars, the big guys up front are getting overshadowed. But another clean-pocket day for C.J. Stroud was complemented by two 100-yard running backs.

Add in the fact that there were no false starts and only one holding penalty, and the line set the tone and paved the way for victory.

“I always preach to our offensive line that ‘Y'all are the best players on the team,' ” quarterback C.J. Stroud said after Saturday's game. “I told them, ‘We don't move if you don't move.' “

All of those five-star receivers on Ohio State's roster, even ones who wear designer shoes and Apple Watches while they play, aren't too full of themselves to do the dirty work. They run crossing routes and take big hits, but they also pride themselves in making physical blocks downfield.

Julian Fleming, who had an injured shoulder a few weeks ago, plowed over a Wisconsin defensive back rather than run out of bounds in the third quarter. A few plays later, he caught a pass and bulled into the end zone.

No prima donna stuff there.

Defending Ohio State already was a problem with Stroud, all of those receivers and two good running backs. But every week, tight end Cade Stover looks more and more comfortable in the offense, and like a guy who will play in the NFL.

Stover had four receptions for 51 yards and two touchdowns on Saturday, and Big Ten defensive coordinators surely are rewriting whatever ideas they had over the summer on how to stop Ohio State. Stover can be a force in the run game and now he's showing soft hands and ability to find open spots in secondaries.

The times we are now seeing multiple defenders around him and delivering hard hits on him mean there aren't as many defenders around the receivers most are already worried about. Surely, Ryan Day and Kevin Wilson see that on film.

Few Ohio State players have been better than punter Jesse Mirco. He doesn't get many chances because of the high-flying offense, but he has been nearly perfect all season.

He punted twice on Saturday. The first landed inside the 5, and the second came down inside the 1 but Jayden Ballard caught it and carried it into the end zone.

Get more Ohio State football news by listening to our podcasts