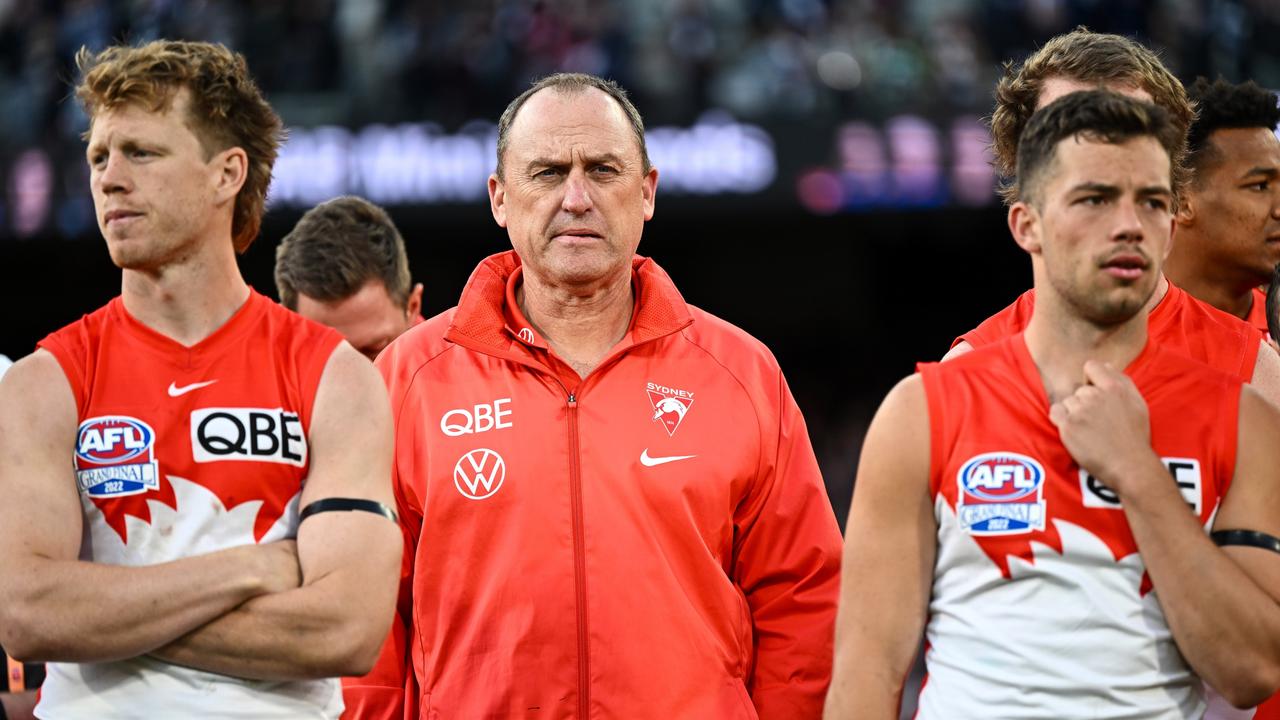 Sydney coach John Longmire has come under fire for his grand final day decisions, including playing injured Sam Reid and leaving star Isaac Heeney down at “starvation corner” when the match started to slip away.

Heeney just couldn’t get into the contest against the Cats and was held to just three disposals and a goal in the first half at the MCG.

Reid meantime, had no impact on the contest with is four disposals before heading down to the rooms late in the second term and being subbed out a short time later.

“Starting with the selection of (Sam) Reid, Geelong were decisive, they dropped (Max) Holmes, or he goes out with injury,” Brown said On the Couch.

“Heeney, not until the halfway through the second quarter, he goes into the centre bounce.

“They are getting smashed around the footy. He can’t get into the game, one of your best players.

“He had to go in to a centre bounce, just get him involved.

“I think this is the job of a senior coach – you have to get your best players into big games early. You can’t just have them down at starvation corner.

“Halfway through the second quarter he goes in for the centre bounce – it’s too far gone. It’s all over by then.”

Longmire has conceded the club made a mistake playing Reid and admitted they just “weren’t in the hunt”.

Fox Footy’s Mark Robinson said he believed there was a “psychological” effect on the Swans when Reid was given the nod to play over young Logan McDonald who was dropped.

“Whatever they did, it didn’t motivate them mentally,” he said on AFL360.

“Did they have the kill in them? Chris Scott made the killer decision – you’re out, you’re in. Is there something mental in that? The psychological effect of going in with an injured player.

“There is going to be baggage from this – I don’t know what’s going to happen to this mob next year.

“They were destroyed on the biggest day in Australian football.”

Brown also highlighted the fact Swan Luke Parker was left to “backpack” Cat Patrick Dangerfield instead of trying to win the footy when the match was on the line.

“They’ve left Parker on Dangerfield – Dangerfield strutting around like he owned the MCG,” Brown said.

“Parker’s their best ball winner, he’s their bull so cut him loose! Go head to head!

“Paddy McCartin had to go forward when Reid came off. They should have just rucked from the bench with McLean and Hickey.

“There were several things that didn’t get changed on the day – they needed to make some moves. It was just nothing happened when the game looked out of hand.

“Geelong were hunting the ball, hunting the Swans. To me, the Sydney mids looked like they were reactive partly because their best ball winner was backpacking Patrick Dangerfield and getting dragged to every contest.”