10 Horror Movies Where A House Is A Character 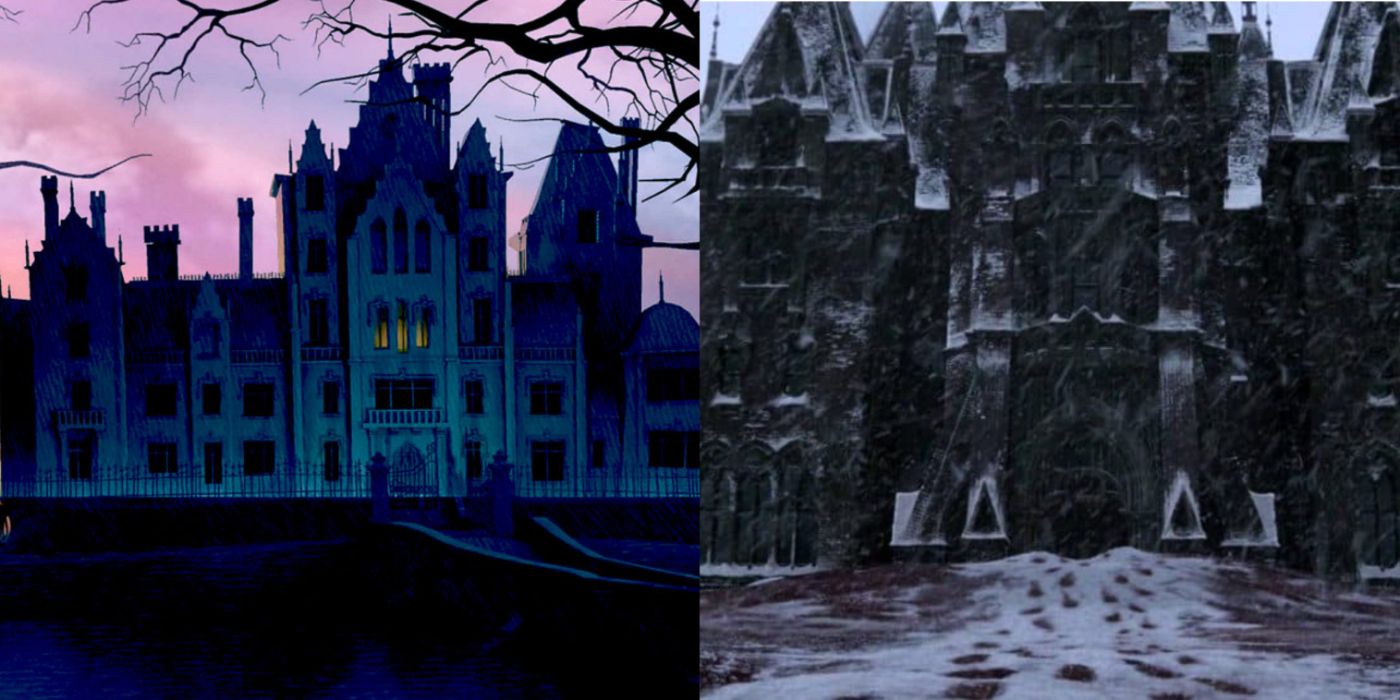 With one of the most recent examples being The Cellar, released in 2022, it's clear that haunted houses, mansions, and other abodes infested with spirits are still a primary source of terror in the horror genre. That all being said, sometimes a film will go the extra mile and push the envelope regarding the house or location itself.

Any house can be old, creepy, and decrepit, but it takes a special kind of design and reputation to where they become just as much of a fixture in the plot as one of the main characters. From Elm Street to Amityville, these houses, manors, and more are some of the most iconic set pieces in the genre.

When most standard movie-viewers think of “a house as a character,” the most blatant example would have to be the titular Monster House from the 2006 animated horror film. Easily one of the most surprisingly scary kids' movies, Monster House naturally has its primary focus in the form of a gigantic old house that becomes a kid-eating monster at nightfall.

RELATED: 10 Biggest Mistakes Characters Make In Every Haunted House MovieTons and tons of haunted houses in the medium have ghosts, but the house in this film is literally possessed by a restless spirit. From claws, teeth, and a tongue, the house is structured and designed to have monstrous or bodily features, allowing it to emote, express, and behave like a frightening creature. The tragic tale of Constance Nebbecracker only gives the monster a sympathetic flavor to counter the house's beastly nature.

When it comes to adaptations of Edgar Allan Poe, few do them better than Roger Corman and Vincent Price. The first entry in Corman's Poe Cycle, the 1960s take on “Fall of the House of Usher” featured Price in one of his most iconic roles as Roderick Usher, the unhinged master of the titular house. Roderick isn't the only malevolent force lurking within the walls, as he himself states, “The house itself is evil now.”

As in the original story, the house and surrounding countryside are reflections of Roderick's sanity. As his intentions go from suspicious to sinister, the house goes from gothic manor to a chamber of horrors.

The “House of Usher” segment from Extraordinary Tales is more than worthy of an honorable mention on multiple accounts. Not only is it a true text-to-screen adaptation of Poe's famous story, but it features one of the last performances of the late Christopher Lee with animation that would make Tim Burton swell with pride.

While the segment is narrated impeccably by horror icon Lee, the house itself is the star of the show. The further Roderick slips into madness, the more decrepit and dangerous the mansion becomes. From bits of rubble crumbling off to the great crack down the center of the structure, it's a downward spiral into the mouth of terror.

“We say haunted, but we mean the house has gone insane.” is a quote that perfectly summarizes and captures the spirit(s) of Rose Red. This miniseries penned by the legendary Stephen King features a beautiful yet incredibly haunted house in Washington state with more than a lion's share of supernatural activity.

RELATED: 10 Scariest Haunted Houses In Video GamesFans of The Haunting of Hill House will easily draw parallels between the Shirley Jackson work and that of Rose Red, but with arguably more bombastic twists and turns. With its iconic stained glass and crimson facade, the house certainly stands out on a visual level as well as spiritual.

While it was marketed as a grisly, ghostly horror movie, Guillermo Del Toro's Crimson Peak is a gothic fantasy masterpiece with one of the most elaborate and beautiful haunted houses seen in recent years. Built on a mountain of “bleeding” clay and home to a murderous pair of siblings and several of del Toro's most incredible monsters, Allerdale Hall is a dream come true for fans of spirits, phantoms, and other apparitions.

Ghosts and spirits aside, the house itself is impeccably designed, immense and elaborate, in scale, size, and appearance. Looking much more like Dracula's castle than just the standard-issue creepy mansion, this should be the image everyone pictures when they hear the words “haunted house.”

Sometimes, it's not the ghosts that currently live in the house that makes it scary, it's the history behind it. Like so many neighborhoods in small-town America, 1428 Elm Street is the resident spook house, but with a much more terrifying secret than the regular supernatural activity.

Before Nancy Thompson called it home, it was the abode of the Springwood Slasher himself, Freddy Krueger. The acts of murder committed by the clawed creep in the boiler room of that house were unspeakable, and it serves as his anchor to the living world. The location is iconic and serves as a key element in the plot across the series.

The Farmhouse (The Texas Chainsaw Massacre)

No matter which version of Texas Chainsaw it is, from the original to the Netflix adaptation, there is always an old house for Leatherface to call home. Featured in one of the most iconic shots in horror history, the large plantation house in the middle of an open field serves as the film's iconic location.

RELATED: 10 Best Animated Haunted House Movies To Watch Before Netflix's The HouseThe exterior is certainly recognizable, but it's the interior that truly serves up the shock factor, especially in the Tobe Hooper original. A living room full of skeletal furniture, a meat locker full of hooks, and the infamous dining room are as nightmarish now as they were then.

Whether it's the book, the original movie, the remake featuring a serious Ryan Reynolds, or the legion of series and spinoffs, few haunted houses come with such a reputation as the Amityville Horror house. Outside, viewers are exposed to a large, evil-eyed house among the pines. Inside, a hotbed of horrors and supernatural activity saturates the abode.

As the site of actual murders, demonic activity, and other supernatural occurrences, the house has more than a terrifying reputation. Whether it's in the original accounts or the film adaptation, the house remains one of the most iconic in and out of the realms of fiction.

Inspired by one of the most haunted locations in America, Winchester is home to a house built by restless spirits. While the movie was not well-received, it certainly got the appearance and reputation of the Winchester Mystery House right. Reviews aside, the house is just as important and imposing as the legion of spirits that haunt it.

Like the actual mansion, the winding staircase is the main feature, but the labyrinthine halls, stairs, and corridors turn the house into a twisting, turning maze of the macabre. Simply put, the film wouldn't exist without it.

The Overlook Hotel (The Shining)

Out of all the various haunted locations in cinema, there is perhaps no structure more infamous and iconic than the Overlook Hotel of Stephen King's The Shining. As one of the most studied and discussed horror stories of all time, the hotel itself has been viewed through a multitude of lenses well after both the book and movie have been in circulation.

Connections to the circles of hell, the effects of alcoholism and addiction, and even Edgar Allan Poe's “Masque of the Red Death” have all been drawn from this singular sinister structure. Axe-swinging Jack Nicholson aside, it already comes pre-packaged with a plethora of horror stories that give the place a life of its own.

Next: 15 Best Horror Movies On Netflix, According To Rotten Tomatoes