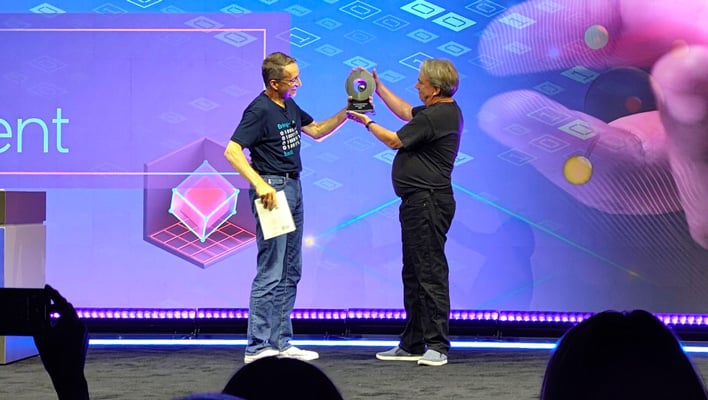 Linus Torvalds became the first ever recipient of the Intel Innovation Award for Lifetime Achievement during Pat Gelsinger's opening address at Innovation 2022. Torvalds is a Finnish-American software engineer who created and pioneered the Linux kernel, used by Linux distributions and other operating systems such as Android.

Toward the end of Pat Gelsinger's opening remarks, he took the time to bring Linus Torvalds on stage. The two reminisced a bit about how Torvalds got his beginning with Gelsinger's book on the 8386, with Torvalds saying he actually lost his own copy. Gelsinger fixed that, as he provided him with a signed copy before presenting him with a Lifetime Achievement award.

Torvalds was born in Helsinki, Finland, and attended the University of Helsinki between the years of 1988 and 1996. He graduated from there with a master's degree in computer science. He is best known for his open source work with Linux kernel. 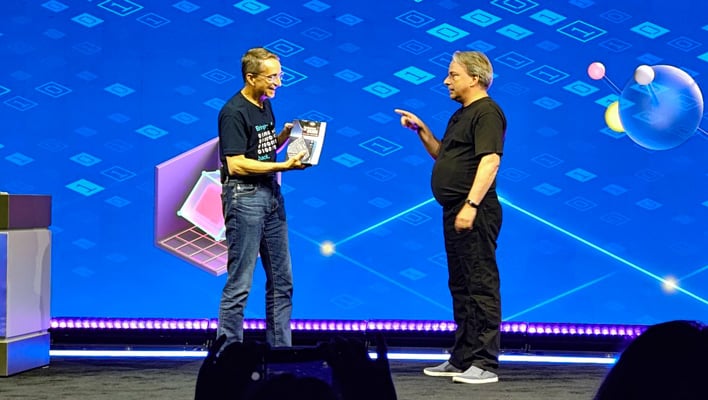 When Gelsinger asked Torvalds what his must do for a thriving ecosystem was, he responded that people need to feel they are a part of making decisions and are invested. He explained this played a role in the licensing model he chose for Linux—particularly because it does not afford him any special rights.

Pat then asked Torvalds what his vision for open source was over the next 20 years. Torvalds replied that he was not a visionary, but more of a “plotting engineer.” Therefore, he says he looks only a couple of releases ahead, and not 20 years away.

Following a short walk down memory lane, Gelsinger presented Torvalds with the first ever Intel Innovation Lifetime Achievement Award. He has also received awards in the past for his pioneering work such as the 2012 Millennium Technology Prize, as well as the 2014 IEEE Computer Society Computer Pioneer Award and 2018 IEEE Masaru Ibuka Consumer Electronics Award.

Linus and Intel have not always seen eye-to-eye. In the past, Linus has rallied against Chipzilla for stifling error correcting memory support on desktop platforms and has accused the company of providing lackluster solutions to the Spectre and Meltdown CPU flaws. Nevertheless, Linus understands the importance of the x86 architecture and Intel clearly respects the tireless contributions Linus has made.

If you would like to hear more conversation between Gelsinger and Torvalds, there will be an interview posted in the near future between the two on Intel's website.