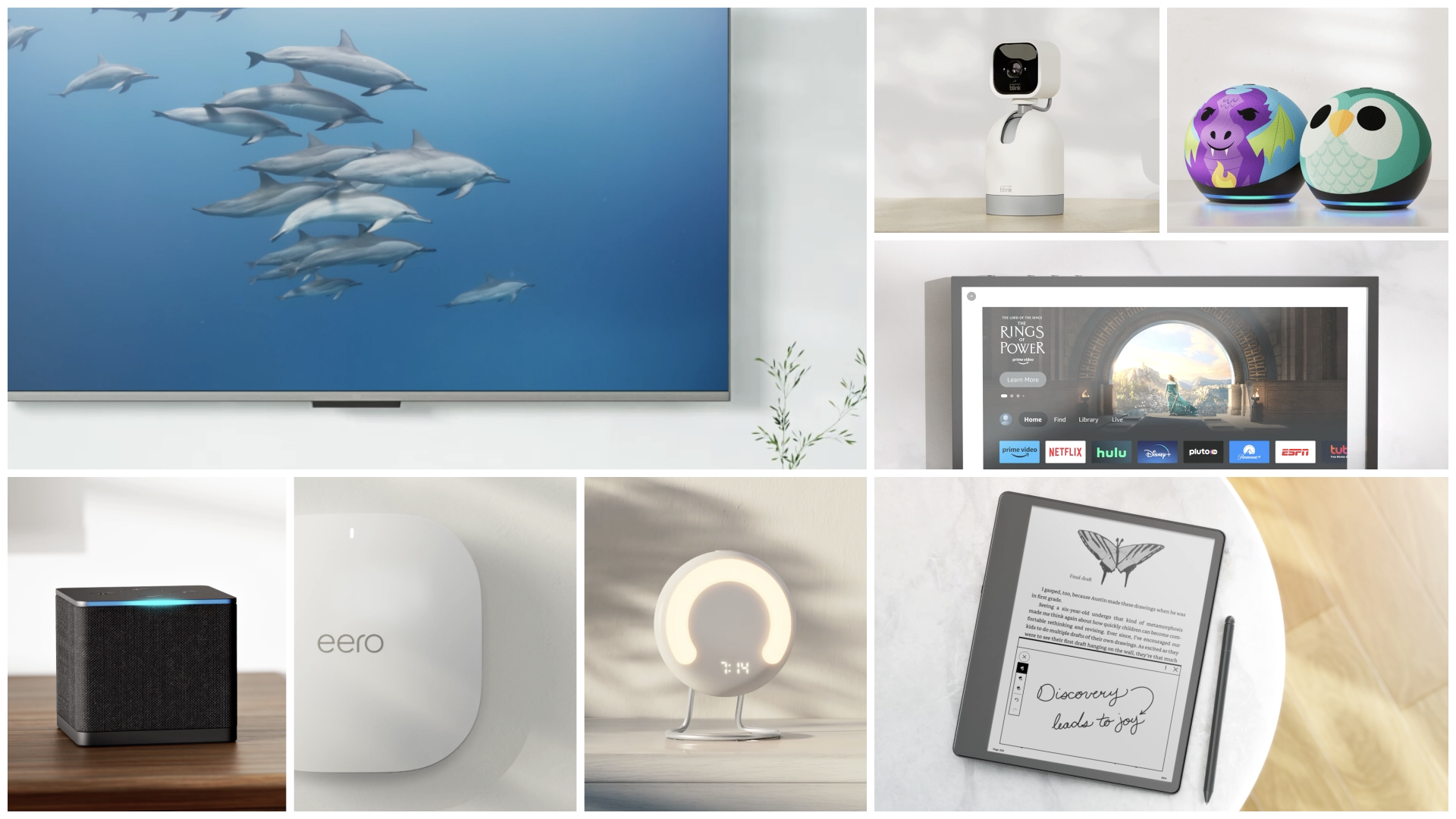 Amazon held its annual fall hardware event on Tuesday. As in years past, the company had a lot to share in a short amount of time. We saw it announce new Echo, Kindle and Ring devices. It also had a few surprises up its sleeve from Eero and some of its other subsidiaries. Here's everything the company unveiled today.

It only took the better part of 15 years, but Amazon is finally about to begin selling a Kindle with a stylus. Available later this year and starting at $339, the Kindle Scribe features a 10.2-inch, 300ppi front-lit display and magnetic pen. The nifty thing about Scribe is that you don't need to sync or charge the stylus, and you can use it to jot down notes, annotate books and journal. You can preorder Kindle Scribe starting today.

It wouldn't much of an Amazon hardware event if the company didn't update its Echo line. This year it obliged by introducing a redesigned Echo Studio that features a new spatial audio processor that Amazon claims allows the speaker to deliver better stereo sound with “greater, width, clarity and presence.” According to the company, the new speaker also delivers better midrange clarity and deeper bass. Additionally, it now comes in a white colorway. The Echo Studio will cost $200 when it ships next month.

Amazon also redesigned the Echo Dot to fit a larger driver into the diminutive speaker. The company claims the new model offers twice the bass of its predecessor and clearer vocals. Its equally adorable sibling, the Echo Dot with Clock, now features a more capable display that can show information like the current artist and song title. Both models also feature more responsible touch controls. The Echo Dot and Echo Dot with Clock are available to preorder today for $50 and $60 respectively. Amazon is also releasing two new Kids versions that go on sale next month for $60.

After announcing a security drone in 2020 and a patrolling robot in 2021, Amazon's home security-related announcements were a bit more subdued this time around. The company introduced two new cameras from Ring, the Spotlight Cam Pro and Spotlight Cam Plus. Both devices include Ring's advanced Bird's Eye View motion detection technology, a feature that was previously only available on the company's flagship cameras. Amazon will offer the Spotlight Cam Pro and Spotlight Cam Plus in battery, plug-in, solar and wired variants, with the most affordable version of the Pro starting at $230. The Plus, meanwhile, will set you back at least $200.

Blink, Amazon's other home security company, is also releasing new products. Today it announced the $100 Wired Floodlight Camera. It offers a 2,600-lumen LED light, 1080p live view and two-way audio, as well as motion detection. If you own one of the company's Mini security cameras, you can now buy a pan-and-tilt mount for it that expands the camera's coverage. The $30 accessory is available to preorder today.

Amazon's Eero didn't have as many announcements as we're used to seeing from it, but if you already own one of the company's mesh WiFi devices, you'll appreciate what it did have to share. To start, Amazon's new Echo Dot speakers will now double as Eero WiFi extenders. Add one to your existing network, and you can add as much as 1,000 square feet of additional coverage to your home. The Eero team is also preparing an Internet Backup feature that will automatically switch your router to an alternate connection during internet outages. That functionality will be available in the “coming months” to Eero Plus customers and from supporting internet providers.

Eero did have new hardware to share, though it's a device that's more aimed at businesses. The Eero PoE 6 draws power from an Ethernet connection, making it easier to mount on a wall or ceiling. It offers speeds of up to 1.5Gbps and a maximum of 2,000 square feet of coverage. It will be available this October for $300.

Unspursingly, Amazon is continuing its expansion into the health and wellness market, with a “no-contact” sleep tracker called the Halo Rise. According to the company, the device uses a “low-energy sensor” to detect the movement and respiratory patterns of the person sleeping closest to it. Each morning, you'll see a summary of your data, with a few tips on how to get more restful sleep. It also doubles as an Alexa-compatible smart speaker and a sunrise clock, meaning you can configure Rise to gradually wake you up in the winter months when the sun might not be up before you need to get out of bed. Halo Rise will cost $140 when it goes on sale later this year.

Amazon began the Fire TV portion of its fall event with a refresh of the Fire TV Cube. The new model features a more mature design that should help the Fire TV Cube look less out of place in your living room. Amazon has also equipped it with a more powerful 2GHz octa-core processor, and an HDMI connection for TV passthrough. Taking advantage of the latter feature, you can switch to specific channels with voice commands. Alongside the Fire TV Cube, Amazon introduced the $35 Alexa Voice Remote Pro. It comes with a finder feature that can trigger a noise if you ever lose the remote.

Amazon is also expanding its Fire TV Omni line to add two premium QLED models. Available in 65- and 75-inch models that will cost $800 and $1,100 respectively, they're the first TVs from the company to include support for Dolby Vision IQ and HDR10 Plus Adaptive. Additionally, they feature full array local dimming, with the latter model making use of 96 zones. They also come with an Ambient Experience mode that will display art or Alexa widgets when you enter the room. The series will go on sale next month.

Oh, and if you own an Echo Show 15, Amazon says you can expect a free update in the near future that will let you use the smart display as a Fire TV device. Handy that.

Amazon had a few other announcements mostly centered around the car. First, there's a new Echo Auto that's slimmer than its predecessor and features a more secure adhesive grip. BMW also joined Amazon on stage to announce that it's working with the retailer to build the next version of its in-vehicle voice assistant using Alexa as a base. The automaker didn't share too many details about the project, but promised it would “enable an even more natural dialogue between driver and vehicle.”

Follow all of the news from Amazon's event right here!