Intel And Samsung Showcase A Slidable PC With A Screen That Stretches, Check It Out 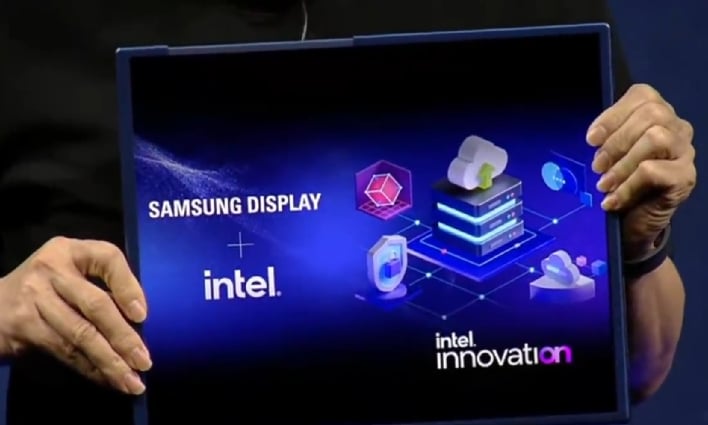 Intel led off its Innovation 2022 event with a flurry of huge announcements. In the midst of news about its Arc GPUs, Raptor Lake CPUs, and other other products, Intel and Samsung snuck in a concept “slidable” PC that featured an extendable OLED screen.

Innovation got off to a fast and furious start, as CEO Pat Gelsinger presented a plethora of announcements during his opening presentation. Social media was abuzz, trying to keep up with all the news coming out of San Jose. In the midst of it all, Gelsinger and Samsung Display CEO JS Choi added an unexpected surprise, a prototype slidable PC that extends from a 13-inch display into a 17-inch display. (Click the image below to see the “slidable” screen in action.) 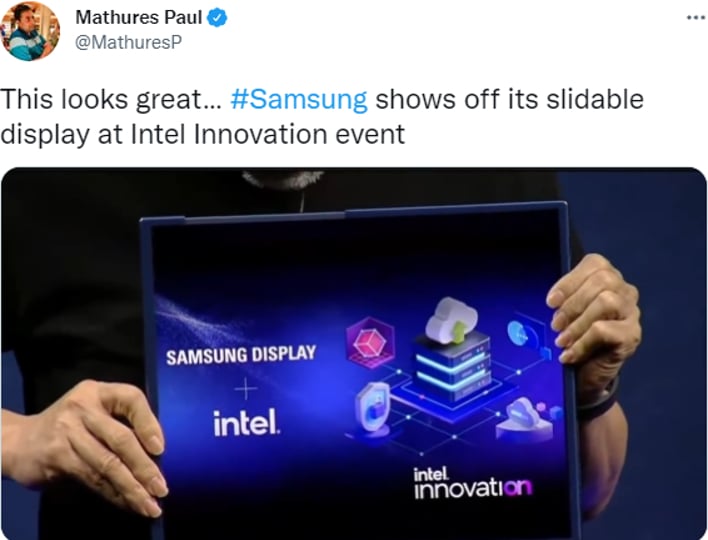 The stage party—also including Ria Cheruvu, AI Ethics Lead Architect at Intel—took turns passing the device around. The display membrane remains remarkably flat with just a slight hint of bending in the left half.

“We're announcing the world's first 17-inch slidable display for PCs,” Choi said to those in attendance. “This device will satisfy various needs for a larger screen and portability as well.”

The design allows the user to pull from one edge, and turn what first appears as a tablet, into more of a laptop size screen. Gelsinger remarked that it is a demonstration of what is possible with OLED display technology that is built onto a flexible plastic substrate.

Other companies have recently been exploring foldable screens, and making them larger and more durable. One example is the ThinkPad X1 Fold, a device created by Lenovo that unfolds into a 16-inch device.

While the product is quite intriguing, it is possible it will never see production. However, it does showcase what is possible and that companies are still looking to stretch the limits of the imagination as far as possible when it comes technology.

NeNe Leakes Called Out for Revealing Dress at Porsha’s Wedding

List Of Winners And Performances From The 22 Soul Train Awards