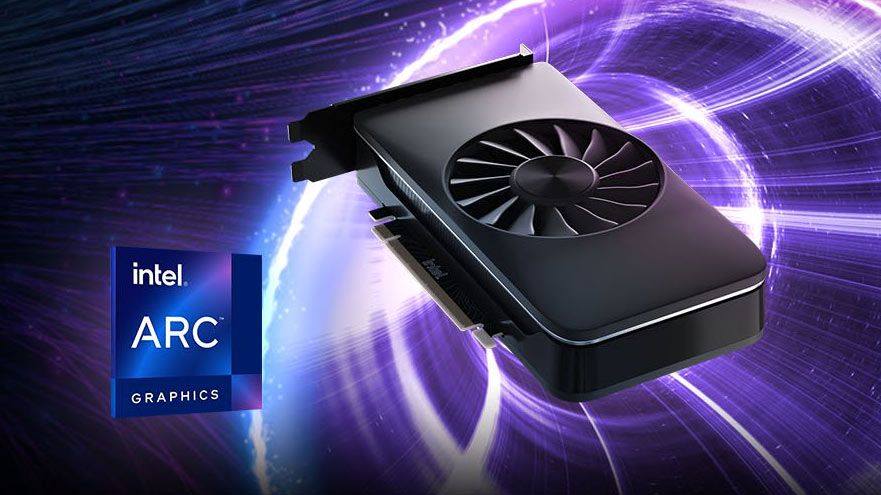 Intel has undercut its entry-level Arc A380 with the official reveal of the previously leaked Arc A310. The Arc A380 wasn’t a powerhouse by any means and the new A310, based on the same 5nm TSMC fabbed ACM-G11 GPU, offers only six Xe cores (versus A380's eight), and 50% less VRAM (4GB versus 6GB) on a narrower 64-bit bus. From what we have seen in leaks and spills leading up to today, the Intel Arc A310 will be mostly sold to folk who only have the need for basic GPU acceleration, and perhaps only have room for a low profile graphics card design that doesn’t require additional power connectors. It is probably safe to say that the A310 won't make it on to our list of best GPUs for gaming in 2022.

When a graphics card goes official there is often a flurry of partner press releases and product pages uploaded. At the time of writing the Arc A310 looks a little neglected in the partner-love stakes, perhaps due to its unglamorous low-end nature. Either that, or the Intel product specifications releases have taken partners by surprise. Nevertheless, we now have the official specs, so let’s plug them into our comparison table:

At this stage there are some oddities and / or discrepancies in Intel’s Arc 310 specs depending where you look. On one page the Game Clock of this card is 2,000 MHz, on another official Intel site it is 2,100 MHz. Also we see that it purportedly offers PCIe 4.0 x16 support, but the A380 is limited to x8, which would be peculiar. Lastly, Intel mentions the Arc A310 is a 75W graphics card, just like the A380, but we reckon it could easily shave some watts off that in low-profile partner solutions.

Yesterday, after an eternity of “soon,” Intel announced that the Arc A770 graphics cards will become available starting on Oct 12, priced from $329 (8GB). No mention was made of this A310, but the specs were shared just a few hours ago. Thanks to torn_us for bringing them to light. We have no word on Arc A320 availability or pricing for now. We would also like to know what is happening with the only Arc 500 card we are expecting this generation, the Arc A580 (specs tabulated above, but not on the Intel Arc).