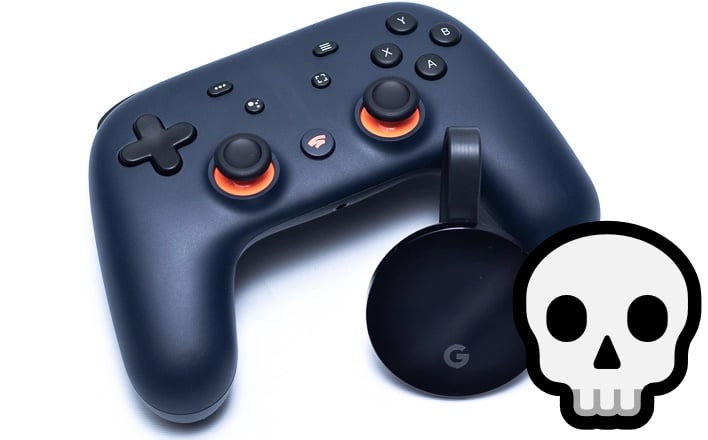 Cloud gaming isn't dead, but it certainly hasn't taken off the way some folks wish it would. Case in point: Google's Stadia service, one of the first big players in the space, is shutting its doors less than three years after they opened.

If you're not familiar with it by name, Stadia is the name of Google's cloud gaming service. Stadia lets you play games “anywhere” using any compatible device. The list of compatible devices is long, and includes almost any Android and iOS devices, Chromecast Ultra, as well as personal computers (including Chromebooks) using a web browser. It offered a “free” tier where players could enjoy some games they either purchased on the platform or else were available at no charge, or could opt for a “Pro” subscription which included access to an array of premium titles for a monthly fee. The Pro subscription also unlocked better streaming quality beyond 1080p, up to 4K.

This is possible because cloud gaming runs the games on remote servers (in this case, Google's) and then simply sends a video feed of your gameplay to the device. Your controller inputs are then sent back over the internet to the game running on Google's servers. This kind of service works reasonably well in big cities with low-latency fiber connections, but outside of that environment, it's a much worse experience than playing the game on local hardware.

Despite strong enthusiasm from certain segments of the industry for the technology behind Stadia, Google faced a lot of criticism upon the service's launch for its business model. As a separate platform, players could not simply transfer their existing libraries over to Stadia from places like Steam. This is significantly different from other cloud gaming services, like GeForce NOW and Xbox Cloud Gaming, which either let you play games you already own (GeForce) or include a list of games with your subscription (Xbox).

Google admits that the reason Stadia is being shuttered is because it “hasn't gained the traction with users that [it] expected.” Cloud gaming in general has faced high skepticism from gamers who are already leery of licensing terms that limit ownership of their purchases. Particularly for PC gamers, cloud gaming by its nature as a remote service removes the possibility of many options and features that local gaming provides, including (but not limited to) input device customization, game modding, and settings tweaks outside of what the game provides natively.

We have to give Google credit for one thing at the very least: the company is refunding all Stadia hardware purchases as well as game and add-on content purchases. This is a great move from Google that should help soften the blow to the Stadia faithful significantly. Imagine if Sony or Microsoft refunded your store purchases since you can no longer go online with the Xbox 360 and PlayStation 3. That's not likely, so we have to give props to Google here.

As we mentioned above, the technology behind Stadia was well-regarded. With a solid internet connection between you and Google, it could be surprisingly similar to gaming on local hardware. Google says that the tech won't go to waste, and that it has found applications in YouTube, Google Play, and the company's augmented reality efforts. Google also says that it remains deeply committed to gaming, which is an interesting statement. We are still waiting on that Google Play Games app for Windows to come to fruition.

The company also says that “many of the Stadia team members” will be finding jobs elsewhere in the company, which is nice to hear. Stadia membership has already been closed, but current subscribers will be able to keep playing through January 18th 2023, “so they can complete final play sessions,” another nice touch from Google. If you bought a Stadia controller or games and need a refund, you can read about how to get your money back on Google's Help Center.