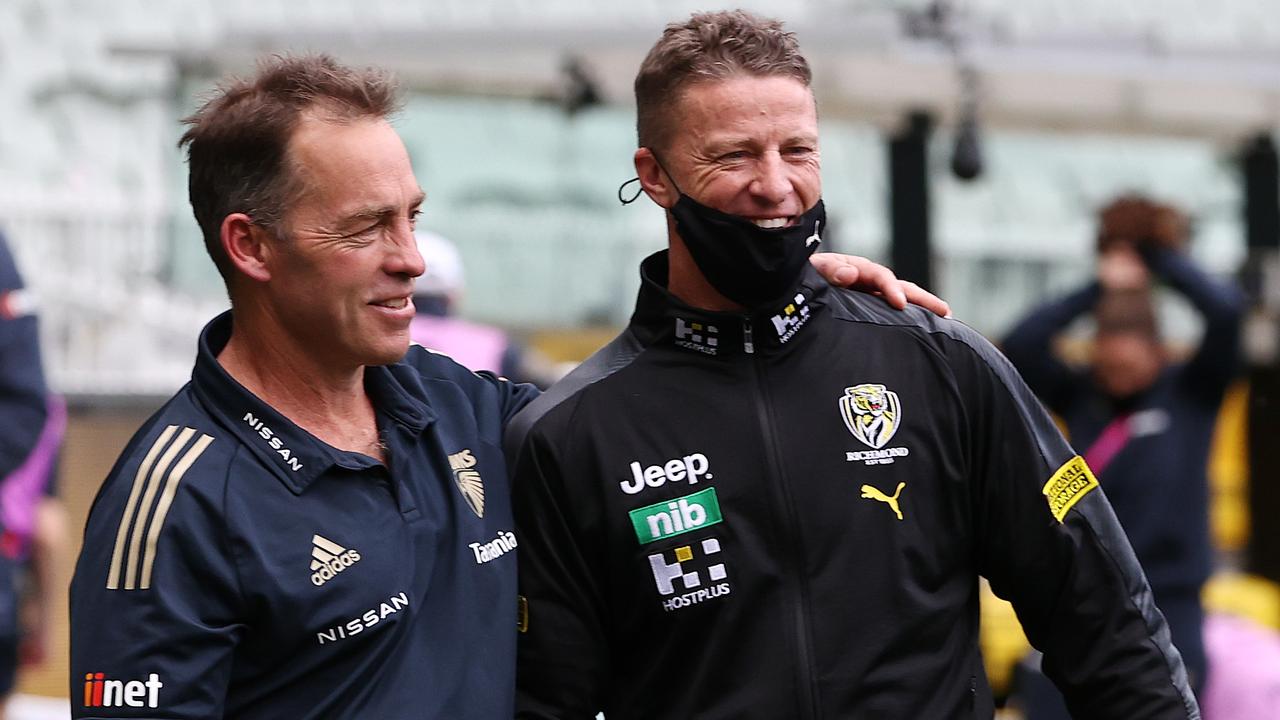 Alastair Clarkson’s treatment has been labelled “incredibly disheartening” and a “bit distasteful” by fellow AFL coach Damien Hardwick amid growing support for the embattled ex-Hawks mentor.

Clarkson is yet to give his version of events after damning allegations about his treatment of First Nations players at Hawthorn exploded in a club-endorsed report last month.

The four-time Hawks premiership coach has strenuously denied the claims made against him and pledged “in the strongest and most emphatic terms possible” that he did not behave in the manner it is alleged.

Among the allegations are claims he assisted separating a player from his partner and encouraging another player to tell his partner to get an abortion.

Foxfooty.com.au does not suggest the allegations in that report are completely true and accurate, only that they have been made and are being investigated by other bodies.

STATEMENT ‘Only wanted the best for me’: Premiership skipper speaks out

Clarkson had been due to start as North Melbourne coach on November 1, but that date has been pushed back so he can assist the AFL with their investigation into the matter.

Just a week after Roos club president Dr Sonja Hood described Clarkson as being “fragile”, former colleague Damien Hardwick said the coach was “not in a great place”.

“I know this guy. I’ve known him for a hell of a long time and he’s not in a great place, let’s be perfectly honest,” Hardwick said at a WAFL grand final function in Perth.

“To have that accusation and alleged incidents thrown at you and then splashed across the media when you don’t have an opportunity to defend yourself is incredibly disheartening and probably a little bit distasteful.

“What we do have to do is work our way through it, come to the other side and hopefully, for the benefit of everyone, we grow and we learn together.”

Clarkson, Fagan and Burt all remain on leave from their respective roles after damning allegations in the report was made public.

All three have denied the allegations, while Clarkson says his “clear memory” of the matters reported is “very different”.

“I will continue to cooperate with the AFL and I am trying to retain my trust that it will put in place a fair, respectful and supportive process for all involved. However, I will not hesitate to take further steps to protect my position and reputation should that be necessary,” he said.

“I do not intend to make any further comment publicly on the process or on further media reports.”

Three-time Hawthorn premiership captain Luke Hodge has stepped up to make a public statement defending both Clarkson and Fagan, despite coming under fire for doing so.

“I just had to show support in a tough time for those that did exactly that for me throughout the more challenging moments of my life,” he wrote.

“My experience with each of these men is that they only ever wanted the best for me and my family, and I wish them well in what is an extremely challenging time for everyone involved.”