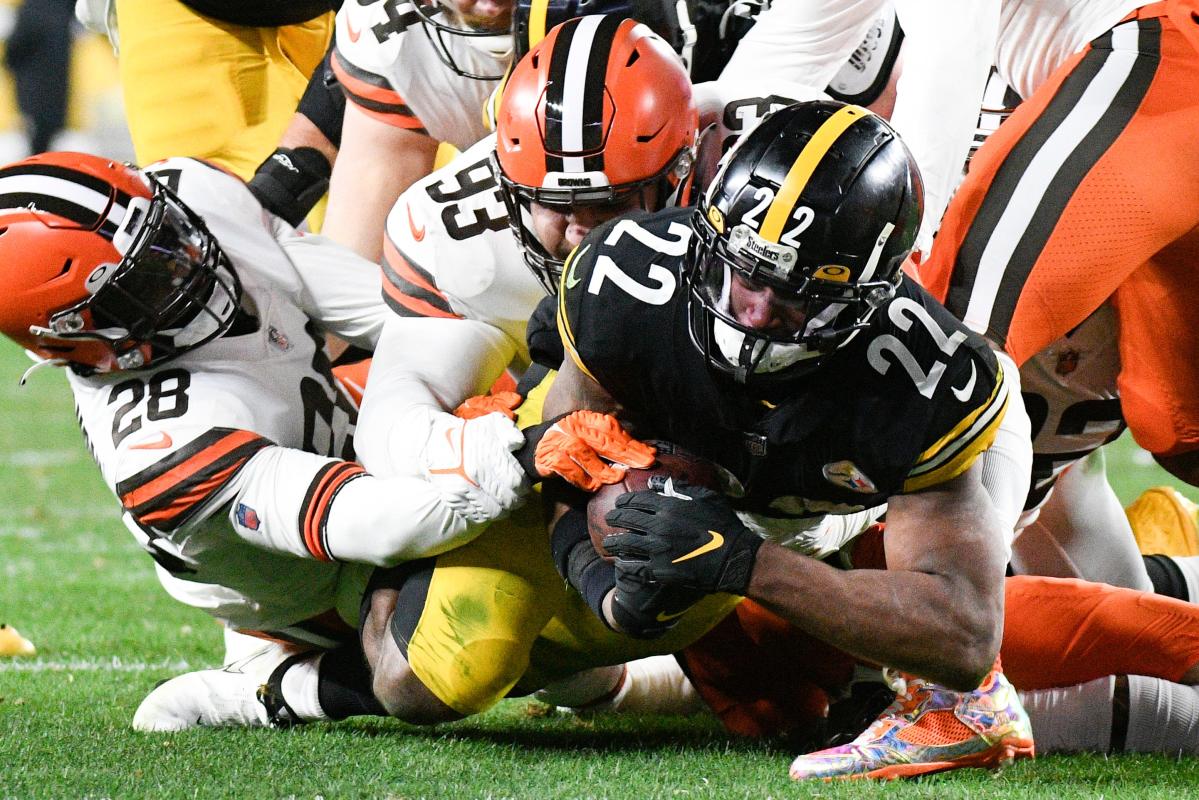 That will open the door for second-year pro Tommy Togiai to make his first career start. The former Ohio State Buckeye is trying to balance the personal joy with the professional sympathy for a teammate.

“No, I'm really excited,” Togiai said Friday. “I mean, I'm sad that my boy Taven's down and can't be out there. But, I know I've got that ‘next-man-up' mentality. So I mean, I'm going to go out there and play as hard as I can to do my job and do what I can to help the team win.”

Togiai, a 2021 fourth-round pick, has appeared in all three games thus far for the Browns. He had one tackle, one assisted tackle, 0.5 sacks and a quarterback hit this season.

I think using my hands, especially, has been a big thing,” Togiai said of his improvement this season. “Then just confidence. Confidence in my play, confidence in myself and my teammates trust in me that I'm going to get my job done and going out to play and showing it.”

Two defensive starters whose status had been up in the air this week got the green light to play on Friday. Cornerback Denzel Ward (back, ribs) and linebacker Jeremiah Owusu-Koramoah (groin) had no designation on the team's game status report early in the afternoon.

Both players had missed Wednesday's practice with the injuries, which Ward said Friday was more precautionary for him than anything. However, they returned on a limited basis for both Thursday and Friday's practices.

Also back on the field Friday were several offensive players who had missed at least one practice with an injury designation since Wednesday: left guard Joel Bitonio (biceps), right tackle Jack Conklin (knee) and tight end David Njoku (knee). Lineman Joe Haeg (concussion) was the only offensive player ruled out for the game in Atlanta.

The Falcons' Cordarrelle Patterson was back at practice on Friday. He had missed the previous two days due to rest linked to a knee issue.

Patterson comes into Sunday's game as the NFL's No. 3-ranked rusher with 302 yards on 49 carries. He has rushed for at least 120 yards and a touchdown in two of the Falcons' first three games.

Originally drafted with the No. 29 overall pick in 2013 by the Minnesota Vikings as a receiver, Patterson has transitioned to running back since arriving in Atlanta last season. He was the only player to appear on the Falcons' injury report either Wednesday or Thursday.

Jordan Elliott potentially the ‘last one standing' on defensive line

Assuming both Garrett and Clowney are eventually ruled out for Sunday's game, which is a distinct possibility considering neither practiced this week, it would mean three defensive line starters would be out. That leaves just defensive tackle Jordan Elliott among the original starting group.

The other starters around Elliott could end up being a second-year player (Togiai), a rookie (defensive end Alex Wright) and a sixth-year player who would be playing in just his 66th game (defensive end Isaac Rochell). Elliott is taking a “whole-is-greater-than-the-sum-of-the-parts” approach to things.

“You know, this week we're just kind of looking at it like, everybody working as a unit,” Elliott said. “Just feeding off each other. Not necessarily putting more pressure on me but I always have to do my job, you know what I'm saying. We just got to go down there and execute the defense.”

There has been much made about the matchup concerns created by the Falcons' “unicorn” of a tight end, Kyle Pitts. The 6-foot-6, 247-pound Pro Bowler can obviously line up as a natural tight end, but can also be regularly split wide in the formation.

One of the possibilities the Browns may try against Pitts is Martin Emerson Jr., their 6-2, 201-pound rookie cornerback. Emerson has already been tested in his first three games by players such as fellow rookie George Pickens of the Steelers.

However, while Emerson acknowledges there's a slight difference in handling a player like Pitts compared to others, it's not a substantial difference.

“I have to be more firm at the top of my routes, because he'll probably be able to push off, be a little stronger,” Emerson said. “So that's probably the only difference. Plus he can run, so I look at him as a true receiver, really.”

Patience is a virtue for Browns tight end David Njoku

The last time the Browns played a game, it was David Njoku's break-out game of the season. A tight end, Njoku had nine catches for 89 yards and a touchdown on 10 targets in the game.

There had been a lot of talk coming out of the first two games about the amount of targets and touches Njoku was getting. He had four catches on six targets for 39 yards combined against the Carolina Panthers and New York Jets.

“It is hard,” McCartney said Friday. “All of those guys want the ball. Everybody wants the ball. He has done a great job. He improved tremendously over just the course of time I have been here from 2020 in his playing without the ball. We talk about that all the time, playing without the ball, I know it is hard because everyone wants the ball, but he has done a great job of improving and just being a complete tight end.”