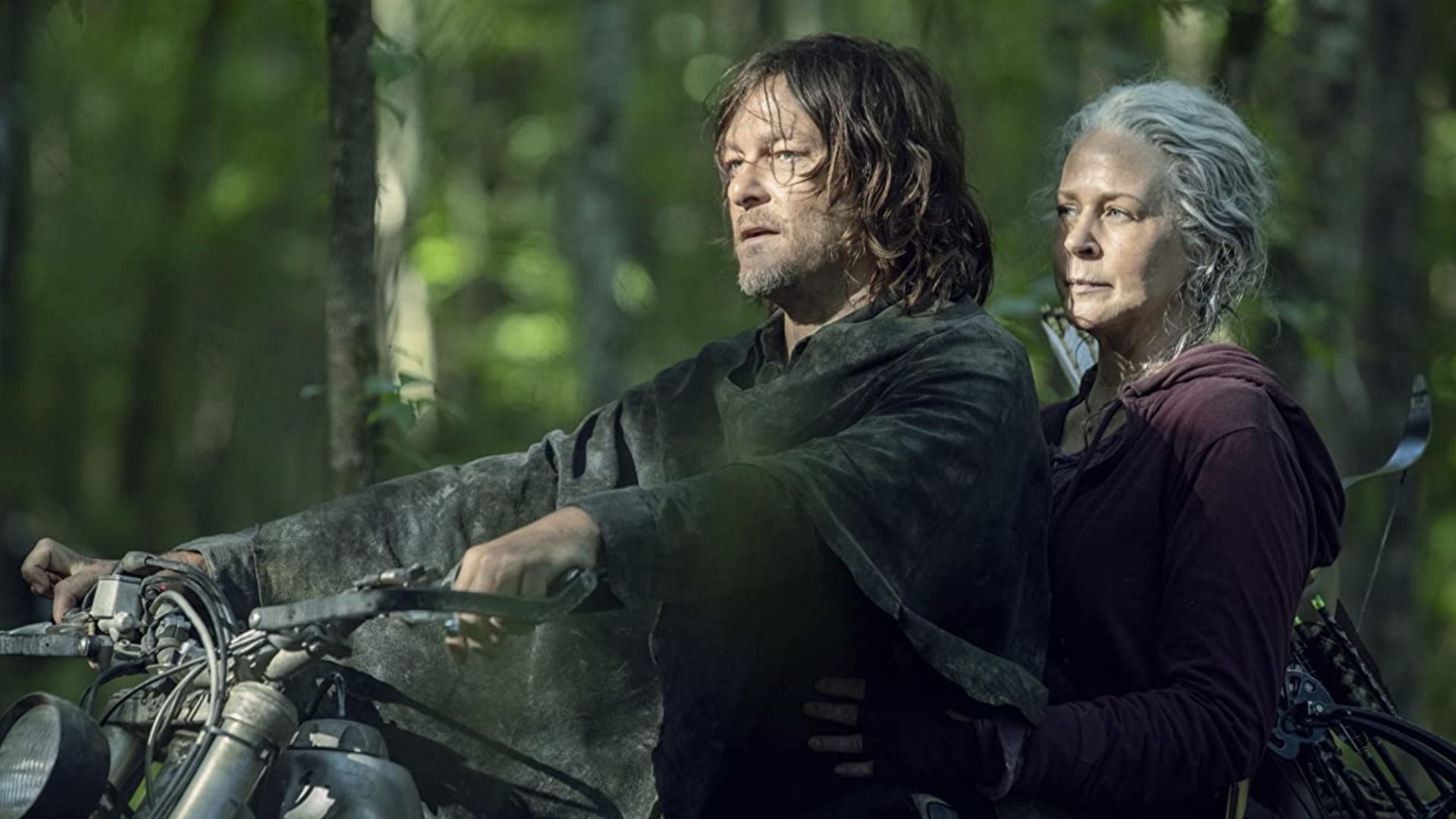 It’s been 11 years since The Walking Dead first entered our households. We watched as Rick Grimes (Andrew Lincoln) woke up in a post-apocalyptic world where the dead walked and changed the world. He eventually reunited with his wife and son and a small group of survivors. Since then, the series has covered a lot of ground and only Daryl (Norman Reedus) and Carol (Melissa McBride) remain of the original cast (on screen at least). Even though the stalwart show is finally coming to an end after all these years, have no fear, the universe isn’t going anywhere. The original spinoff, Fear the Walking Dead will premiere with its eighth season soon enough which features another OG survivor, Morgan (Lennie James). But there are more spinoff shows and movies in the works, so this isn’t goodbye, it’s just goodbye for now. This final season has 24 episodes and has been broken up into three parts with eight episodes each.

When Part 1 ended, we were left with a bunch of cliffhangers. Leah (Lynn Collins) had discovered that Daryl was not loyal to her group, the Reapers, and was actually helping Maggie (Lauren Cohan) and Negan (Jeffrey Dean Morgan) attack Meridian. Leah killed the Lead Reaper, Pope (Ritchie Coster) and declared herself the new leader while outing Daryl's double agency. Newly allied, but still tense, Maggie and Negan found themselves under attack nearby as the Reapers shot fire arrows at them. Meanwhile, Connie (Lauren Ridloff) was finally reunited with her sister Kelly (Angel Theory) when the group saved her with Virgil (Kevin Carroll) from a house full of feral cannibals. And back in the Commonwealth, Eugene (Josh McDermitt) had run afoul of the ‘too good to be true' Deputy Governor, Lance (Josh Hamilton). Imprisoned and desperate, Eugene is offered a deal for his release in exchange for more information on Alexandria.

Thankfully, in Part 2, we didn't have to wait too long for all of these questions to be resolved. Maggie, Negan, Daryl and team have managed to overpower and escape the Reapers. After a tense chase battle, the Alexandrians finally manage to overpower the Reapers. Ruthlessly, Maggie kills them all except for Leah, who Daryl shows mercy to and releases. Negan decides to take off on his own, knowing he’ll never fully gain Maggie’s trust. The rest return to Alexandria to see their dilapidated resources after a recent storm. However, Daryl is over the moon to reunite with Connie. It seems as though it is time for Alexandria to once again start over, but the circumstances are more dire than ever. That is just about the time that the Commonwealth soldiers show up with Eugene, leading us to believe he accepted Lance’s deal.

30 days after Eugene and Lance arrived, the Alexandrians have settled in quite seamlessly to the Commonwealth. In fact, they are excited to celebrate Halloween, or to celebrate anything, frankly. Daryl and Rosita (Christian Serratos) have joined the army under the command of Mercer (Michael James Shaw). We finally get to meet the Governor, Pamela Milton (There Robins) who makes an appearance at the party with her assistant Max (Margot Bingham). During the party, a former soldier decides to take Max hostage as an act of protest against the emerging classist system in the Commonwealth. Daryl is able to negotiate Max’s safety and in doing so lets Pamela’s smarmy son, Sebastian (Teo Rapp-Olsson) take credit for it, so he can look good in Mommy’s eyes.

Eugene has begun a relationship with Stephanie (Chelle Ramos) and is madly in love. When she up and disappears one day, he has a minor meltdown. With the aid of Rosita and Princess (Paola Lazarus), Eugene discovers that “Stephanie” is actually Shira, who was working for Lance to get information from Eugene. Devastated, he runs into Max who admits she is actually the “Stephanie” he spoke to on the radio. Their communication was discovered and Lance weaponized it immediately. She only escaped punishment because Mercer, her brother, was able to work out a deal, but it broke her heart to watch him with Shira.

Pamela is taken on a road trip with Lance to see the outlying settlements. She stops by Oceanside and Hilltop where she meets Maggie and tries to understand why she won’t accept aid from the Commonwealth. Lance is absolutely infuriated that Maggie made him look dumb in front of Pamela, since he basically promised Pamela that he could get Maggie to agree to a deal. Lance makes it clear that his motives are for absolute power, and he will do anything to get it.

Connie and Kelly, who are working for the Commonwealth newspaper, decide to lean more into investigative journalism to find out the story behind that soldier who protested the Halloween party. Sebastian sends Mercer and Rosita on what is basically a suicide mission, in which they discover the depths of corruption already underway in the Commonwealth government. They overpower the rest of the soldiers that are with them and decide to join the newly forming resistance. Max starts her own investigation into Pamela and begins feeding information to Connie and Kelly about the Miltons. Adding to the newest info from Rosita and Mercer (and his new girlfriend Princess), the sisters decide to make some noise. And when the paper comes out with the headline, “Pamela Milton is Lying to You,” the Governor is less than pleased.

Aaron (Ross Marquand) and Gabriel (Seth Gilliam) are recruited to investigate a new settlement called Riverbend. Lance sends his head mercenary and local psycho, Toby (Jason Butler Harner) to Riverbend along with Aaron and Gabriel to meet with the leader Ian (Michael Biehn). However, Toby’s motives are made clear when instead of discussing an agreement, he kills Ian and declares the Riverbend enemies of the Commonwealth. Aaron and Gabriel quickly learn that Toby was sent there to bring down Riverbend by Lance, who is convinced they are responsible for attacking a group of their soldiers and stealing a bunch of supplies. Gabriel finds that one of the residents of Riverbend is Negan and his new (and pregnant) wife, Annie (Medina Senghore). Negan sends a message to Maggie at Hilltop that the Commonwealth are out for blood. Maggie heads to Riverbend with Lydia (Cassady McClincy) and Elijah (Okea Eme-Akwari). The group reunites to take on the Commonwealth and manage to kill Toby. Hershel (It was Michael Spiller), who snuck a ride to Riverbend, is nearly killed, but thankfully is rescued by Negan. However, young Hershel isn’t letting him off the hook that easy and forces him to confess to murdering his dad. If Negan thought one measly rescue was going to erase his debt to that family, he is sorely mistaken. Maggie may have admitted she can start to trust him, but he has a long way to go with Hershel.

Lance is infuriated to hear about how things went down at Riverbend. He goes to investigate and even interviews Hershel, hoping he’ll rat on his mom. But the son of Maggie and Glenn is never going to roll over on his parents. Lance decides to attack Hilltop, knowing full well he’ll never get Maggie on his side. Afterwards it is revealed that Leah is the one who stole the supplies. When Lance finds out, he doesn’t kill her, he offers her a job. He also orders his soldiers to kill Daryl, Aaron, and Gabriel. (Don’t worry, they escape.) Leah kidnaps Maggie (on Lance’s orders) and the two finally have the fight that has been coming for a while. Daryl shows up and finally is forced to kill Leah. The two get back to Riverbend to align with Negan and the residents and prepare for the final battle. There is now a Commonwealth flag on the top of Alexandria and Hilltop. Lance and his soldiers arrive at Oceanside and take the residents captive. Now what to do with them? Lance leaves the answer to fate as he tosses a coin.