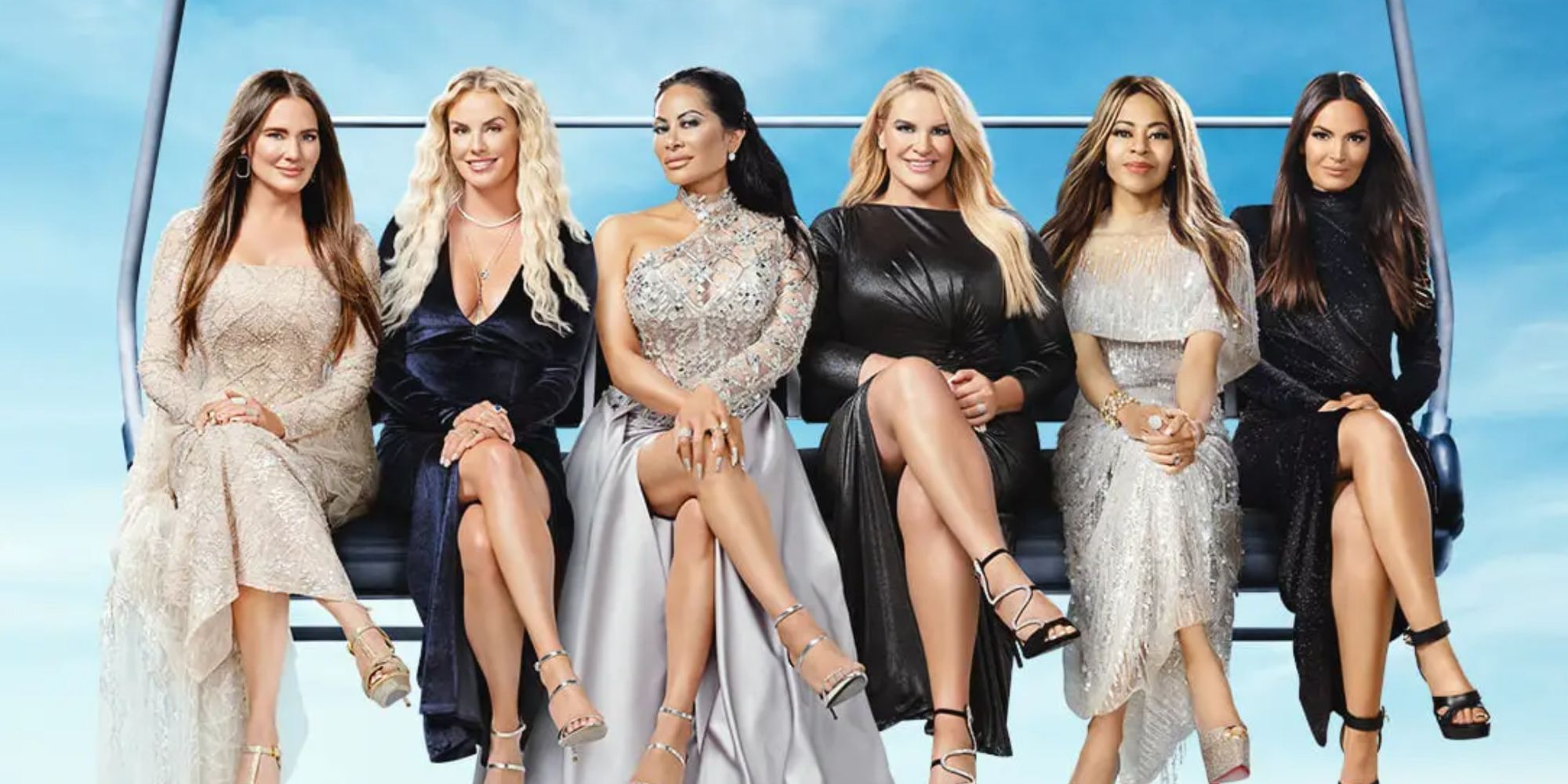 If you're not watching The Real Housewives of Salt Lake Cityseason three of which just started on Bravo, you're missing out on one of the greatest reality TV shows ever made. It has everything: epic feuds, thrown glasses, an alleged cult ran by a woman who inherited her grandfather, a raid on a girls' trip by Homeland Security, and so much more.

The Real Housewives is a franchise that you may think has run out of material to cover. But ROSLC proves that there is so much more gas left in the tank.

ROSLC kicked off with a feud of epic proportions. Mr. Shah was mad at Mary M. Cosby for saying that she smelled “like hospital”, off-camera, before the show ever started. With there not being any footage of the insult in question, it really is just a “she said/she said” situation.

Related: 12 Real Housewives Who Only Lasted One Season

But this one comment blew up into a grudge of epic proportions. Jen was offended because she had just spent all day in the hospital with a family member who just had both her legs amputated. Meanwhile, Mary was so offended by the smell that she had to call it out because she hates hospitals after she had her odor glands removed from her entire body. This argument is the quintessential Housewives argument: it's small, petty, and blown wildly out of proportion.

“You're going to go with Mary?”

Jen and Mary never really came to terms with each other. This led to an iconic moment where Jen flipped out over her friend Meredith Marks deciding to try and be friends with both of them. While at Whitney Rose‘s 1920's Prohibition party, Jen freaked out at Meredith and yelled, “You're going to go with Mary who f***ed her grandfather?”

Related: The Nicest Reality TV Shows, From ‘RuPaul' to ‘Queer Eye,' and Everything In Between

For context, Jen may have been rude and insensitive, but she's not wrong. When Mary M. Cosby's grandmother passed away, she wanted Mary to take her place. This meant taking over her duties in the church, inheriting her wealth and businesses, and marrying her own step-grandfather. He's not blood related to Mary, but it's still a bizarre situation that is a sore subject for Mary, and a catalyst for so much entertaining drama.

Heather Gay is the heart and soul of RHOSLC. A former high-ranking member of the Mormon church, Heather's journey on the show has been all about finding out what life is like post-divorce and post-Mormonism. We watch as she explores the dating world for the first time without the moral constraints of the Mormon religion.

Her journey on the show has also provided some of the most heartbreaking moments in Real Housewives history. After she left the Mormon church, many of her friends and family have disconnected from her. She also attempted to re-connect with a sister who Heather disconnected from when she left the church years before. The fact that through it all Heather still brings so much joy and positivity to the show is what makes her a truly beloved Housewife.

It's one of the most shocking moments in Real Housewives history. While meeting up to go on a girls' trip to Vail, Jen Shah received a phone call. She then asked Whitney to unplug her microphone, and she says that her husband is in the hospital, and she has to leave. The women are super understanding and even consider canceling the trip for her, but Jen insists they carry on. Minutes after Jen leaves, a squad of police officers, including Homeland Security and the NYPD, show up looking for her.

Later that day, Jen Shah was arrested for allegedly being involved in a massive telemarketing scheme and charged with fraud and money laundering. It was a moment that changed the show forever. Of course, once she was out of custody, Jen resumed filming her reality TV show, now covering her fight to prove her innocence.

The Entire “Highway To Vail” Episode

The entire episode in which the women find out about Jen's arrest is iconic. From Lisa Barlow frantically calling six lawyers to determine her role in the whole situation, to Whitney becoming the resident legal expert explaining Jen's charges, to Meredith relaxing in a bubble bath, taking pleasure in seeing her long-held anti-Jen position vindicated. “Highway To Vail” currently has a 9.7/10 on IMDB, and it deserves each and every point.

It's incredibly engaging to watch this car ride. Each of the women try to reconcile with the realization that maybe they didn't know Jen at all. This episode will go down in reality TV history as one of the best examples of capturing genuine life on screen.

Whitney Rose is the best detective in Real Housewives history. Whether she's trying to figure out who told the police about Jen's location, or unweaving the allegations against Mary M. Cosby's church, she is always looking for the truth.

Perhaps her finest moment was when she accused Lisa of sabotaging the party of Lisa's own friend, Angie Harrington by convincing the caterers to pull out, all because Angie is also friends with Whitney. For a moment, Lisa had Whitney convinced, inviting her out for a meal. But the meal was at the restaurant that pulled out of Angie's event! Once the owners of the company, unprompted, began assuring Whitney that Lisa had nothing to do with it, the case was closed. Lisa had been caught red-handed. Lisa must have arranged the whole thing to sell her story.

Season two of RHOSLC was incredibly emotional for the Housewives. Not only because of Jen's arrest, but also because of a multitude of intensely personal altercations, all of which exploded during the girls' trip to Zion.

Designed as a relaxing Mother's Day trip, the Zion trip quickly devolved into argument after argument. Jen went off on Lisa for not being there for her after her arrest and for not having her back against Meredith. Mary's manipulative behavior and aggression was called out, along with Meredith's relentless defense of Mary, and the alleged hypocritical way she treats Jen. Things crossed the line when the women began to suspect that Meredith was lying about her father's memorial service in order to cover up that she called the police on Jen. It's definitely a trip they're going to remember, just maybe not for the right reasons.

After being the chillest Housewife in season one, Meredith took a lot of heat in season two. First was her grudge against Jen for harassing her family, including liking homophobic tweets about her son Brooks Marks. Then, her relationship with Mary M. Cosby was under fire when Mary was being accused of running a cult, and just being generally hateful.

Meredith is one of the most interesting Housewives because of the way she handles these intense situations. Yes, she will engage with you and make her point, but once she's had enough, that's it. She says, “I'm disengaging from this conversation.” and leaves. Most Housewives just explode with anger, but Meredith has incredible self-control, and it's truly impressive to watch.

When RHOSLC was coming together, Lisa was a major part, even recommending the other ladies for the show. Often, it seems as though Lisa is trying her hardest to make dramatic storylines, even at the sacrifice of authenticity. That's what makes her hot mic rant against her best friend Meredith so shocking.

At the end of the Zion trip, after feeling disrespected by Meredith, Lisa ran off and started an expletive-filled rant about Meredith and her family. She accuses Meredith of cheating on her husband by sleeping with half of New York, makes fun of the fact that her husband changes jobs often, and says repeatedly that she hates Meredith. Did Lisa realize she was being recorded, or was it her most genuine moment on the show? We'll have to watch season three to find out.

It's not easy being a Housewife. Your personal life becomes plot, and emotions are constantly running sky-high. But the general rule is that everyone knows the deal, and works together to make great TV. By the end of season two, Mary M. Cosby just seemed over the whole thing. She was referencing the fact that they're not real friends, and then, she broke the golden rule by not attending the reunion.

You can hate the show. You can choose not to return for the next season, but Mary tried to break the show. You just can't do that. After skipping the reunion, Mary was fired from the show, even though she thought she was still returning for season three. We'll miss her quirky, bizarre life, but if she doesn't want to be on the show, then so be it.

Next: Peacock Will Now Stream Bravo Shows the Day After They Air