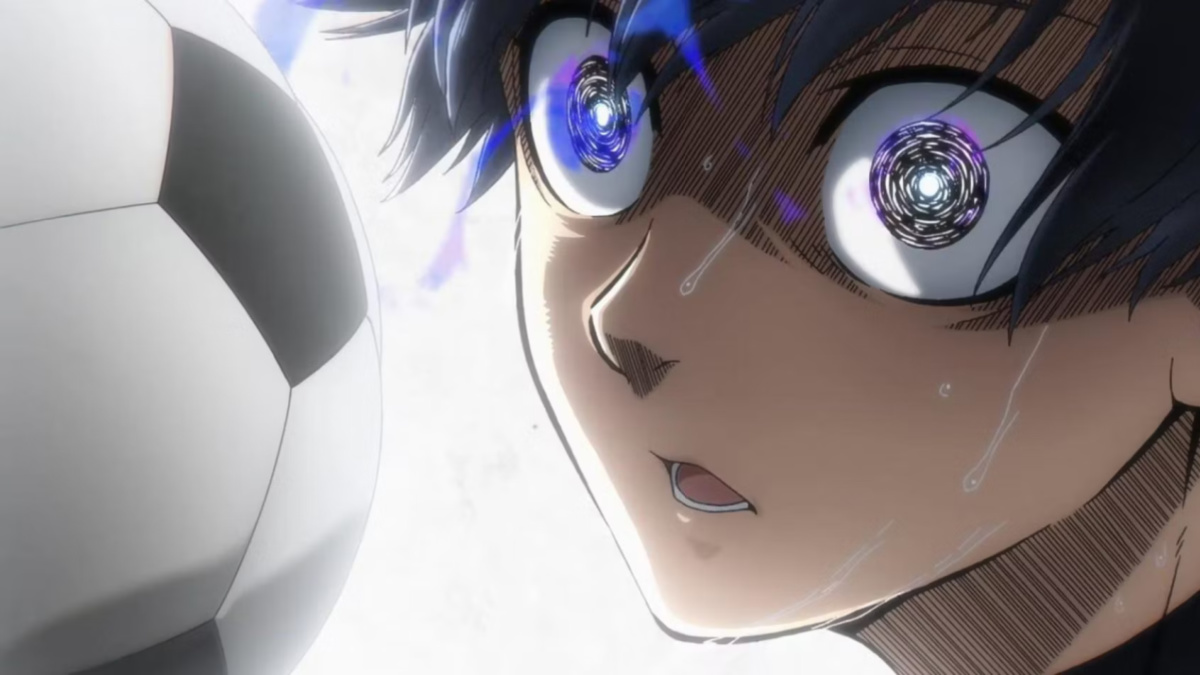 If one were to base their opinion of the new Football anime BLUELOCK on the Sports anime genre’s norms, they wouldn’t be blamed for expecting another show about hot guys trying their best sports. Such has been the tried and true formula of sports anime for decades now, and shows rarely, if ever, break away from this method. And why would they; people like the positivity inherent in stories of coming together and overcoming an obstacle as a team.

And yet, within its first episode alone, BLUELOCK showed me that there’s something sinister lurking under the surface of the usual sports anime tropes of hot guys and wanting to be the best. This show has so much honest-to-goodness edge that one could cut themselves on it, and that might just be the series’ biggest strength.

Take the premise it offers, for example: Following a loss that keeps his high school team from advancing to Nationals, Isagi Yoichi is given an offer to come to a special training program hosted by the Japan Football Union. Once there, he doesn’t find officials positing the merits of teamwork and unity. Instead, a specialist says that he’s deadset on creating an egoist that can lead the Japanese National Football Team to victory, morals, and modesty be damned.

To that end, he’s gathered 300 of the best teenage Football players from throughout the country. They’ll all be subjected to survival game-style competitions until only one is left standing. The winner will go on to lead the National Team as the country’s best Striker, while all the losers will never be able to participate on the National Team for the rest of their lives.

This leaves Isagi with no other option than to cut down the competition, survive each new challenge, and be the only one left standing by its end. He’ll need to cut down potential allies, endure grueling Football-based twists on survival game challenges, and bring out the darkest parts of himself in order to emerge victorious.

Is this all a little over the top and ridiculous? Undeniably. One can only make a Football-based survival game seem so intense before it starts to feel ridiculous, and BLUELOCK crosses that point several times in the first episode alone. I was cracking up at how unintentionally hilarious it was to watch someone dribble a ball around after other people, trying to hit them so that they’ll have the ball once a foreboding timer ticks down to zero.

But that’s the thing: This overly serious and dramatic approach to a goofy premise comes off as genuine. This is mainly due to how much time and effort BLUELOCK puts into making this conflict feel real through its characters and presentation and how both these elements play into the wider product.

In terms of the characters, most of the weight comes from how well it strikes at the nerve of the more self-centered side of sports. While the show mainly focuses on Isagi’s perspective, it does so in a way that speaks to the mindset of anyone who desperately wants to achieve a goal. They will do anything and take any measure possible to be the best they can be and achieve their own dream.

Sometimes this does mean working together with others like in every other sports anime, but oftentimes, it takes the less attractive form that BLUELOCK shines a light on, and, as this new show depicts, that’s not always for the worse.

The presentation of these themes only bolsters this message. The animation is surprisingly high quality, utilizing a rougher animation style to sell the more brutal and cut-throat mindset brought into the mix by the survival game elements. Viewers can feel the impact of a football colliding with players or the hits that occur as players struggle to stay in the game.

This is matched by music that is both energetic and intense, amplifying the emotions that are running high as the reality of the players’ situation sets in.

Once all of these elements are blended together, the end result is a show that is determined to offer a more grim view of sports anime than most anyone is used to. It wears its edge on its sleeve and doesn’t look to have any reservations about displaying it prominently for the remainder of the series.

Obviously, this show won’t be for everyone. Its more self-centered themes and views on sports are sure to hit a nerve with people who like the usual sports anime, and it definitely won’t win any awards for being “feel-good” anytime soon.

For everyone else, though, this is a darker spin on a genre that has stuck to the same formula for far too long now. I’ll have my fingers crossed that it can keep up the momentum from its strong first impression and continue to weave a tragically entertaining tale of striving to be the best by any means necessary.

Twinfinite was given early screening access to BLUELOCK’s first episode by Crunchyroll. The anime will begin simulcast streaming through the platform on Oct. 8.