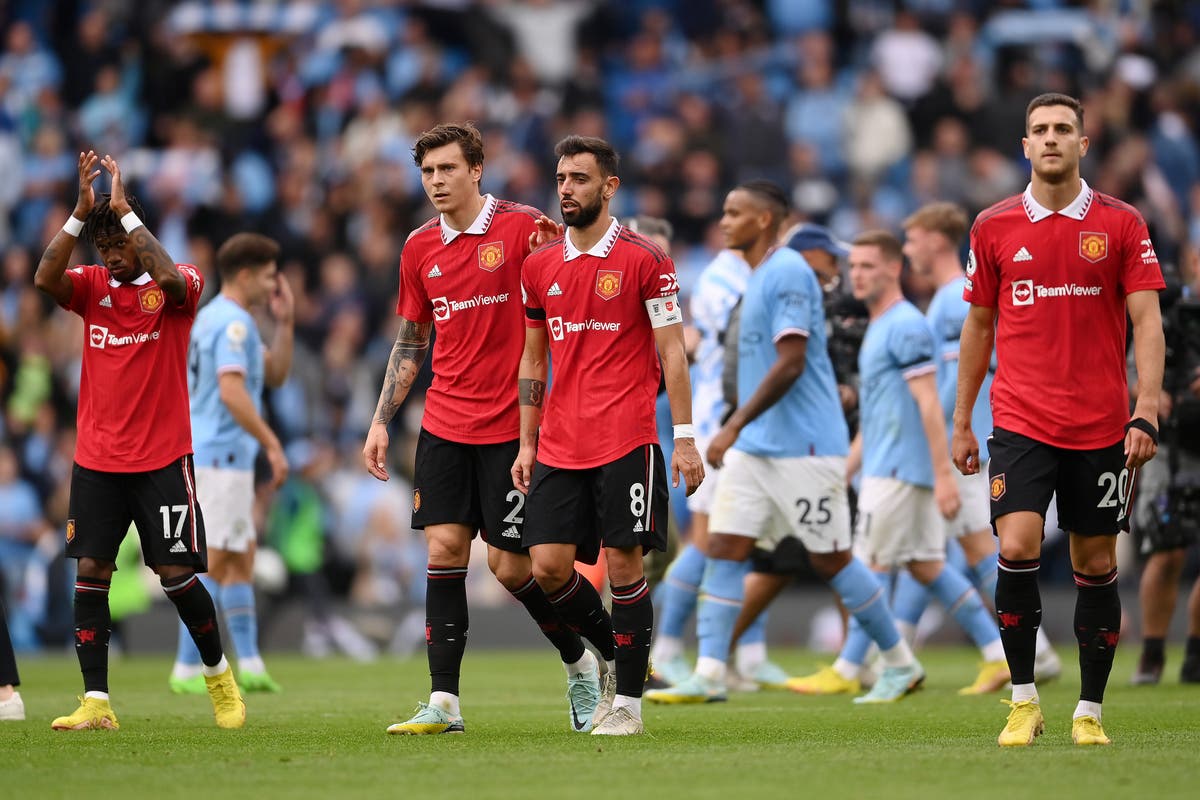 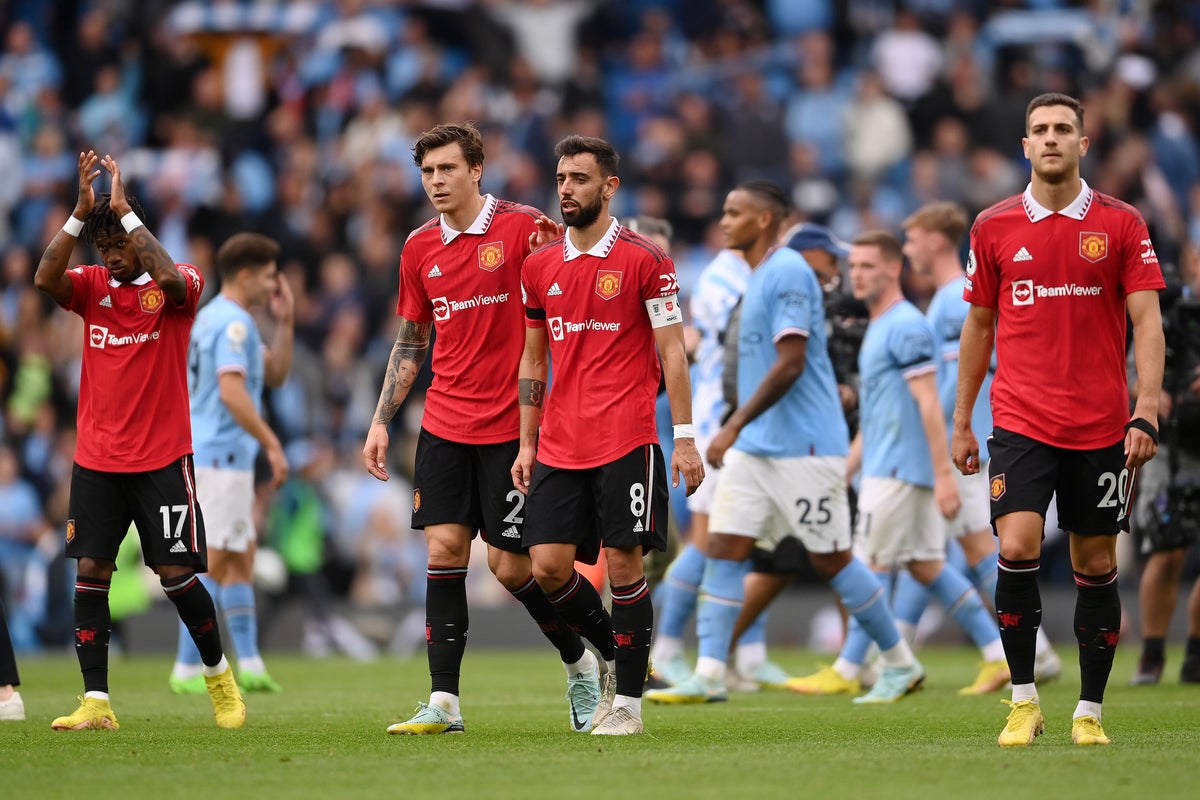 If at some point on Sunday morning you had told Erik ten Hag that his side would score three times at the Etihad and come close to an even share of possession with Manchester City, he might have fancied his chances of getting a result. He certainly would not have expected to be 4-0 down at half-time, to concede hat-tricks to two different players or for Manchester United to quite simply be “hammered”, which was his choice of word to describe this 6-3 defeat.

Even the late consolations from Anthony Martial and those spells of largely innocuous possession came only when the 188th Manchester derby was over as anything approaching a contest, long after Erling Haaland had scored his obligatory three goals. At 6-1, with 15 minutes left to play, the sight of Pep Guardiola making a quadruple substitution – which involved replacing three of City’s best players in Phil Foden, Kevin De Bruyne and Jack Grealish – was like something out of a testimonial.

Make no mistake, this was a battering. The 35-point gulf that existed between these two clubs last season – a great, aching chasm stretching from Beswick to Stretford – was reflected in every meaningful passage of play. The scale of City’s superiority was not even a surprise despite the fact that, until recently, United’s derby defeats in the Guardiola era have at least had an air of respectability. Before this calendar year, they had never conceded more than three in a single game. In their last two meetings combined, United have let in 10.

It was a desperate performance, so desperate that perhaps the only positive that ten Hag can take is that, somehow, it was still not their worst of the season. How could it be when not only United’s campaign but also the post-Sir Alex Ferguson era bottomed out two months ago against Brentford? And, unlike that humiliation in west London, at least this one was not by their own hand. It was the result of running up against arguably the best in Europe, by extension the best in the world, and therefore certainly the best in Manchester.

While City are playing football on another astral plane, this is where United are right now. It is what they are right now, and that should not be news to anybody who’s been paying attention. Just as the four straight league wins were not to be taken as a turning point, this humbling should not eradicate the work of the past month and a half, or the goodwill that has been shown towards a new manager. United have had plenty of post-mortems in recent years. Here is a chance to perform one with a cooler head than usual.

Ten Hag, you sense, will not overreact. The United manager infamously forced his players in on their day off after the Brentford defeat and had them collectively make up the 13.8km deficit in running distance between themselves and their opponents. Questioned by sports scientists, it was a mental as much as a physical exercise – designed to show the value of hard work – but he does not feel the same punishment is required this time. “Today is also mental, but it’s a different mental issue – it’s belief,” ten Hag claimed after the match.

“It was obvious we were not defending [on the] front foot. We let them play. In possession, not brave enough,” he said. “In the last five games, we brought that attitude onto the pitch, a strong belief, conviction, and we brought opponents problems. Today it was the other way around.” Ten Hag told his players the same at full time, but while reminding them of their post-Brentford reaction. “They showed against Liverpool and Arsenal that, when they perform as a team, when they bring the belief on the pitch, starting individually, they will show them.”

There were sweeping personnel changes after Brentford. This time, they might be more limited. One, in particular, seems obvious. Scott McTominay has won plaudits for his recent performances but had a poor game and was constantly overrun by City’s midfield rotations. Even so, his place is not under threat because he was notably worse than any of his team-mates. It is under threat because there is a £70m four-time Champions League winner behind him, still waiting for a first league start.

Ten Hag had a straightforward answer when asked about his reluctance so far to play Casemiro. “On the day we signed him, we started to win,” he explained. “It’s about the team and the team is doing really well. It’s not against Casemiro; it’s for Scott McTominay. He performed great in the team and then we got into a run.” Casemiro was unveiled on the pitch before Liverpool’s visit to Old Trafford. United won against all expectations that night, and have not needed to look back since.

Until now, that is. Ten Hag values rhythm and has a reputation for sticking with winning teams, but this is not a winning team any more and with defeat comes an opportunity to take the next step along in the process. There is no guarantee of success, of course – it should be pointed out that United still conceded twice with Casemiro on the pitch on Sunday – and Casemiro is not ten Hag’s ideal holding midfielder. He, in the form of Frenkie de Jong, stayed at Barcelona.

Casemiro’s integration into United’s starting line-up has to come sooner or later, though. Losing this derby opens that door and perhaps several others too. You do not have to go too far back to remember the last heavy, humiliating defeat that provoked a reaction from players and management at Old Trafford and, ultimately, a positive response. United have to hope the same happens again.